Whack the PM is a non-partisan and spectacularly satirical election website that lets you beat the crap out of the party leaders in an effort to predict the next Prime Minister of Canada. In this game where winning means you'll lose, candidates are hoping to come out unscathed after participants answer hot topic questions by whacking a party leader on the head.

And while Corina took a look at some more substantive or serious election websites, this one is irreverent and loads of fun. Whack the PM also happens to be 2 for 2 in election prediction: in 2004 and 2006 it knew the results before the ballots were counted.

Plus this will likely be the first - and last - time you see any of the candidates rubbing shoulders in a single hot tub.

It turned out to be great fun whacking the crap out of our "leaders." Sort of saved me the trouble of finding an arcade with Whack a Mole where I could stick on candidate faces.

Whack the PM is the product of the artistically minded James Gang, including Franke James of green driveway fame. It's also not entirely satire.

At the end of the whacking session Whack the PM will give you riding-by-riding information about which candidate has the best chance to beat your detested - whacked - candidate. That means if you beat and bloody Dion, you'll find out which candidate(s) have the best shot at beating the Libs in your riding.

You'll have to excuse me now as I go back to whacking Mr. Harper. 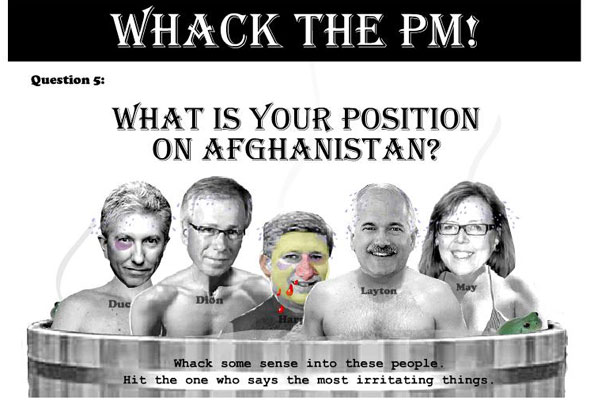