Details are sketchy at this point but an absolutely massive fire at Sunrise Propane near Keele & Wilson is filling the city skies with smoke, ash and just in the past hour, a massive mushroom cloud explosion that rocked the socks off of balcony observers -- see the youtube video footage below and live updates below.

6:50AM - 680 News is reporting that they said there are trains containing chemicals nearby but apparently, no one is sure what kind of chemicals we're talking about.

7:00AM - Another incredible video of the explosion:

7:03AM - Word from various locals and 680AM say that buildings have had their windows and doors blown out in the vicinity. Thankfully, the fire appears to be calming down right now. Local residents have been evacuated by bus and brought over to Yorkdale Mall. If you live remotely nearby, close up those windows and balcony doors. 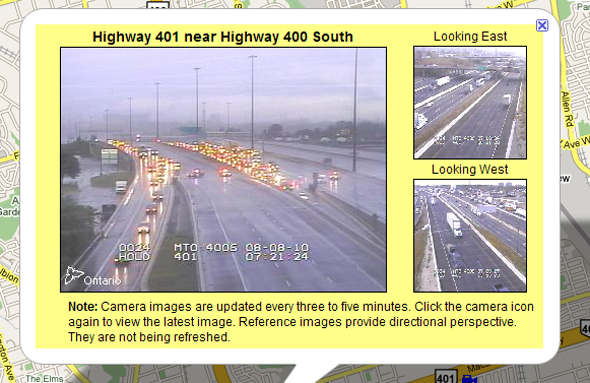 7:16AM - Police are closing off the 401 between highway 400 and the 404. Local residents have been evacuated by bus over to Yorkdale Mall. Avoid the area, and if you're remotely nearby, close those windows and balcony doors.

7:21AM - The blogTO Flickr Pool is filling with reader photos of the blaze. 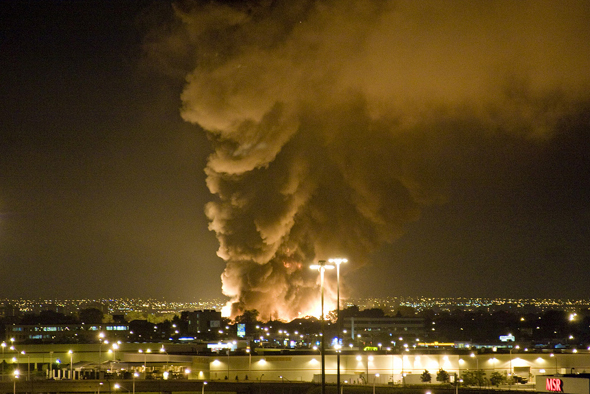 8:00AM - Wilson and Sheppard road closures are expanding. Just avoid the area altogether, folks. The fire is still burning strong as hundreds of firefighters are on the scene working.

680 News is reporting that houses in the area have collapsed and that apparently people were injured earlier -- possibly firefighters. Press conference to come.

8:20AM - All streets closed Bathurst to Jane & Steeles to Lawrence. People are having to go far out go far out of their way to get around so be ware of confused commuters.

Fire department officials say vehicles in the area on fire and homes have been damaged which is why they've evacuated 1.6kms. Rail car tanks containing propane are on site and could blow, so the main effort is to cool tanks with water so that they stay stable and don't blow due to heat pressure.

It's also possible a truck with driver was filling up at the time of the original blast. No major injuries reported so far. Firefighters are being cautious while trying to cool the tanks. There is no estimate on when this could be under control.

Furthermore, Toronto Police officials are instructing everyone in the affected 1.6km area to leave. No one is allowed to come in and get anyone. Drive yourself or use the TTC buses that are shuttling people to safety. Remember to take meds and anything else you'll need for the remainder of the day.

This is also a no-fly zone for any kind of aircraft.

9:30AM - TTC Subway service on the Unversity line is only going as far as Yorkdale Station Lawrence West Stn.

2:35PM - A firefighter has been rushed to the hospital with no vital signs. Police have also set up a hotline for people looking to find out info about their friends/relatives who live in the affected area: 416-736-5185

3:07PM - Food and shelter is now being provided at York University for evacuated people. TTC is shuttling people in and around, pets are being reunited with owners and phones lines have been provided, so if you are waiting to hear from someone in the area, be patient.

3:40PM - The conference with Mayor Miller is underway but no new information coming out of that.

4:20PM - The fire department has confirmed that a 25-year veteran firefighter - found earlier without vital signs - has died.

8:15PM - The 401 has been mostly re-opened and residents have been given the OK to begin returning to their homes. Window repair companies are surely stocking up and hopefully we'll see what on earth 'caused all this destruction when investigations continue this week.

Another video sent to us by a reader. (Thanks Ryan!)