Everybody remembers prom in high school, whether you attended it with sweaty palms, wondering if you'd get lucky afterward, or were too cool and only attended the after-party, or even if you just grimaced at the idea and stayed home with a good book. But whether you loved it or hated it, here's a chance to relive the experience now that you are older, wiser and probably wear better clothes.

Fake Prom has been a Toronto staple on the social scene for six years now and the wildly successful dance party is a 19 plus romp of nostalgia, fashion, music and more. Envisioned by Dylan Reibling, the event has outgrown venues such as Sneaky Dee's, the Gladstone Ballroom, Lee's Palace/Dance Cave and graduated just last year to the gorgeous Palais Royale. I spoke to "Superintendent" Reibling and asked for some of his favourite Fake Prom memories and why he promises that this year will really be out of this world. 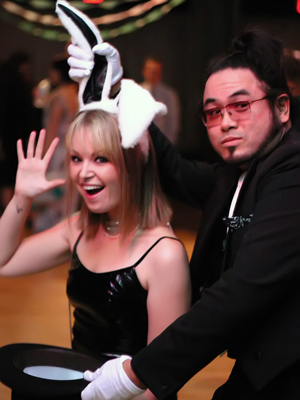 Picturesque costumes, grotesque displays of affection, intoxication and the most absurd dancing are only a few things you can expect this year, as the theme 'Out of This World' will bring with it a vast assortment of science fiction related costumes. I'm half expecting to see Star Trek characters fight phasers against lightsabers with some Jedi's.

When I asked Superintendent Reibling to recall his favourite Fake Prom moments from years past, (mine might be the aftermath of 'Welcome to the Jungle' in 2006, where the giant gorilla decoration was abducted) Reibling had this to say.

Last year, my Fake Prom Moment came the day after the event. Fake Prom at Palais Royale was such a success - everything came together perfectly and people really had a magical time. The next day, I was inundated with dozens of e-mails filled with crazy photographs from the evening and a bunch of great stories. After I returned the last of my rental equipment, I took a walk through the (Kensington) market and a stranger stopped me and asked, "Hey, did you put on Fake Prom?" Yep. And he just said "Last night was special. Thank you." It was just a moment that encapsulated the ineffable vibe of Fake Prom. 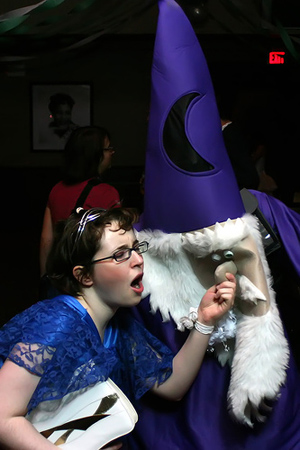 From a Fake Prom Band playing all of your favourite space-y prom songs, to a King and Queen voted by best costume and the memorable 'Portraits Under the Arches', Fake Prom: Out of This World looks to be the best yet. I also have it on good authority that there may be a competition to see who can do the best 'Robot.' Any musical requests that are theme appropriate, that is either space related or slow jams, can still be sent to Vice-Principal Chris Thinn at requests@fakeprom.com

For those who weren't paying attention, Fake Prom 2008 is this Friday August 15th at 9pm at the historic Palais Royale.

The stock of advance tickets as been replenished as of today, tickets cost $15 and can be found at Soundscapes, Rotate This, Hits & Misses and Fanny Vintage. A stock of 200 will be kept at the door for $18 to naughty prommies who don't purchase in advance.