Police seized 700 more bicycles in three searches conducted today related to the recent "Igor Kenk" theft ring investigation. The searches, including this one pictured near College and Lansdowne, have netted over 3,200 bicycles so far.

Of the thousands of bicycles already seized and on display, only 250 have been claimed by their rightful owners, and only three more days remain to claim the two-wheelers.

The bikes have been available at two neighbouring warehouses, which are open to the public every day from noon to 8pm. They are located at 35 Strachan Ave. and 30 Ordnance St. until Thursday. Be sure to bring proof of bike ownership; any unclaimed bikes will become property of the court, so it's worth taking a look before it's too late.

There isn't much I can add to Roger's great posts so far. I'm still flabbergasted that one (or two) people can have this many stolen bikes still on hand, and am glad to see that the Toronto Police are (finally) seeing this through, including a jackpot just down the street from me.

I've heard a lot of commentary and debate on this subject, and I tend to agree with the sentiment that bikes are one of the most personal things to steal from somebody. Everybody has an attachment to their bike, and everybody needs their bike in some way. In some cases it is the primary mode of transportation and for others it may be a recreational pursuit, but we all need and love our bikes.

I have been very fortunate to never have my bike stolen, but I've also been quite insistent with landlords about finding an indoor spot I can park my bike and I try to avoid having to lock it up outdoors. It must feel like a real kick in the gut to return to a bike post and see it empty. Although it remains to be seen if this crackdown will help increase bicycle safety in Toronto, thieves must be taking notice. 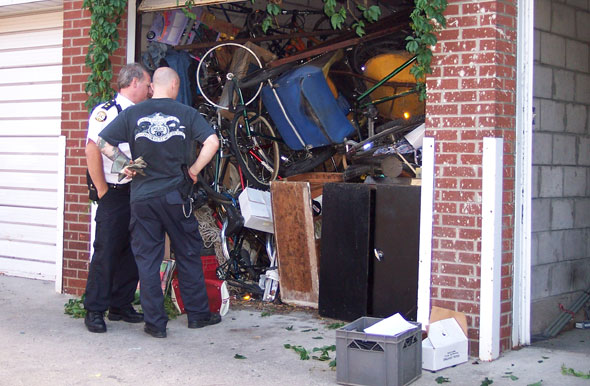 Photos by and hat tip to Natalie Stephenson.