Ontario has proposed new levies on electronics in an attempt to fund recycling programs for computers, TVs, and the like. Come April 2009, a computer mouse will cost you $0.32 more, and a television $10.07 more. And if current trends continue, an ear of corn will cost you $14.00.

Construction of the TTC subway extension to York University has hit a snag because the federal government hasn't yet signed the deal and written the cheque. [kanye]Stephen Harper doesn't care about Toronto people.[/kanye]

In two separate articles on the National Post blog, they take a closer look at two of the city's evolving neighbourhoods. Retail development and the condo craze are tied to the booming of Leslieville, and the continued demolition of older buildings for condo developments are changing the face of Etobicoke Lakeshore near Humber Bay.

CityNews is running a mildly interesting news piece: everything you ever wanted to know and then some - about Russel "The Cash Man" Oliver and his cheesy advertisements. Yes, it is a slow news day, folks (oh yeaaaah!).

In the best-of-five, final round of the Kensington Regional Urban Crokinole Doubles Tournament (an annual that is vying for official recognition from the World Crokinole Championships held annually in Tavistock, ON), three double-disc takeouts by MTV's Daryn Jones and several consistent strikes by Georgian Bay Township regional pro Ryan Davis led the tandem to a 3-1 victory over the Conrad brothers, who still to this day deny being identical twins. 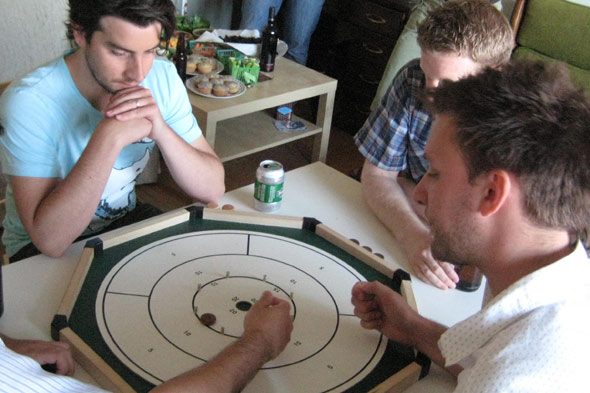