Underwear, Not Trains at a Standstill in Union Station

Commuters made their way through an obstacle course of underwear-clad human statues in Union Station at the peak of this afternoon's rush-hour.

Approximately two dozen people held completely still for five minutes in the main atrium of Union Station catching the attention of those who passed by.

That's what Sunnybrook's Underwear Affair was hoping for when they set up the event to raise awareness of cancers below the waist and their upcoming 10K run/ 5K walk.

The most common cancers below the waist, Prostate and Colorectal, have much better survival rates when caught early. Regular check-ups are the key to early detection and prevention. Unfortunately, these cancers are often seen as taboo, their manner of detection even more so, and many people avoid the check-ups. Speak to your doctor about making sure you're screening for these cancers. 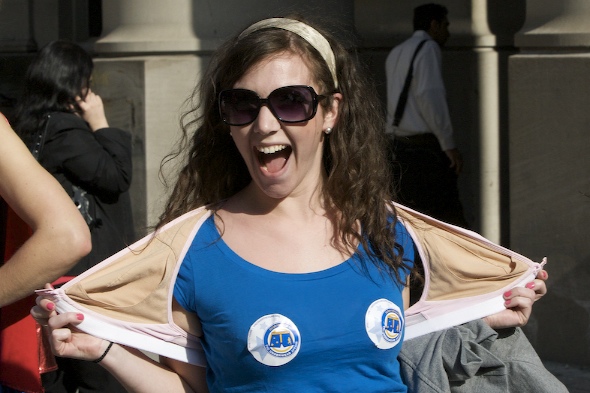 The first annual Underwear Affair will be taking place on August 23, 2008. The run/walk will raise money for research being conducted at Sunnybrook Hospital into cancers such as prostate, colorectal, ovarian, bladder, cervical and testicular. The event won't stop at the end of the race, but will continue into the night with an after-party and an award for best costume.