Last Thursday, York University's Sustainable Purchasing Coalition student group organized a protest rally in Vari Hall, home to what many students see as a blur of protests and petition tables.

For the most part, although they do call some attention to the whichever issues are at hand, these setups are largely seen as a quirky part of York's culture. Only those with particular interest or time to spare will stop to read, discuss or sign anything, and it has become largely accepted that all you can hope to accomplish is raising awareness.

However, after the SPC rally, the organizers sought to deliver a 1000-signature petition to university president Mamdouh Shoukri demanding that the university ensure that products for York are not produced through human and worker rights abuses. After 3 years of attempting to negotiate a No Sweat policy, the SPC wanted immediate action to be taken to get York, at a minimum, up to par with U of T and Ryerson in this respect.

When the students were told the president was unavailable to see them, they decided to stay and stage an old-fashioned sit-in outside his office.

This is remarkable for a student body that in recent years has often seemed to possess a great apathy towards anything other than grades, cultural divisiveness and tuition fees.

What is even more remarkable is the response from the university, and I sincerely hope that this represents a new trend in how the administration is going to behave. While the previous president Lorna Marsden may have been very successful in terms of solidifying York's place as a respected and attractive post-secondary institution in spite of its relative newcomer status, she was not really all that tolerant of criticism of the administration.

"Lorna Marsden has a posse!" stickers can still be found around the campus with the York Regional Police logo on them, a reference to such memories as the police beating, dragging and arresting two students over a noise complaint at an anti-imperialism rally, allegedly beating them further in a holding room in Ross. After a week of silence, the police came back with what I'm going to go out on a limb and call a fabricated story of one student trying to grab an officer's gun, charges of which the student was acquitted.

The university senate did, in fact, pass a motion expressing "its disapproval of the administration's decision to invite police onto campus to deal with an otherwise peaceful protest," and communicated this via a letter to the chief of Toronto Police Services. However, the feeling around campus that Marsden was quick-on-the-draw when it came to silencing dissent was not in any way curtailed. 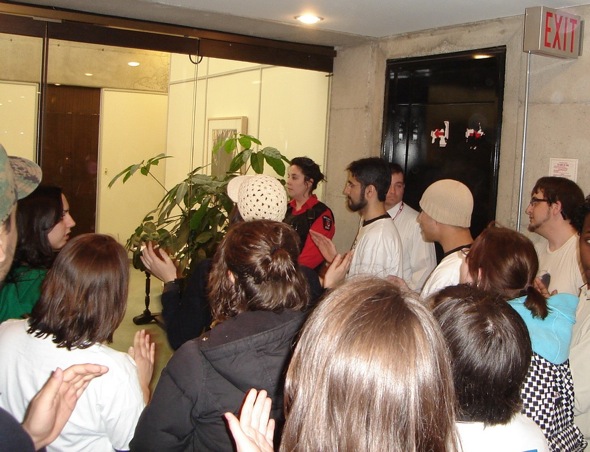 So, the response from the new president, when students not only organize a protest rally in Vari Hall but tromp on up to his office and refuse to leave until they speak to him?

Well, it did take 45 hours (kudos to those who stuck it out), but president Shoukri agreed to a meeting.

Not only that, but a Saturday meeting! This guy doesn't even live in the 416 either.
Things were looking hopeful.

After the meeting, president Shoukri made a significant step towards solidifying his image as a very reasonable person by making a commitment to introduce a No Sweat policy at York by this April.

"The policy will be at least as progressive as U of T and other universities, if not more," he said. "If other universities have had this policy and withstood the test of time, I don't see why we can't do it too."

Makes sense, right? If it makes sense, and there's little to lose and a lot to gain, of course York should adjust in that direction, right? After all, founding president Murray Ross' words are engraved in rather large letters 7 floors below the current president's office:

"We at York ... must give special emphasis to the humanizing of man, freeing him from those pressures which mechanize the mind, which make for routine thinking, which divorce thinking and feeling, which permit custom to dominate intelligence, which freeze awareness of the human spirit and its possibilities."

It would seem that it is very much in the university's mandate to behave in a healthy and rational way towards everyone it affects, whether that means students, faculty, employees or those with which the school has an external relationship. While it might have benefited York in the past couple of decades to focus on its reputation as a career-ready degree granting institution, it is now time to focus again on broader and deeper responsibilities to the students and to society.

"We hope this meeting will set a precedent for future interactions between students and York administration," said Besmira Alikaj of the SPC.

York U No Sweat Rally photos by embargo clothing.