Picking Toronto's best magazine was an easy choice for our readers. Voting in this category wasn't even close. While there's a lot to love about such publications as The Walrus, Broken Pencil, Shameless and This Magazine, it's Spacing that ultimately distinguishes itself from the rest.

Initially a side project by members of the Toronto Public Space Committee, Spacing Magazine has gone on to win numerous awards, market the TTC (unofficially), launch two online publications and organize debates and events like Toronto the Good.

Keep reading for my interview with Spacing's Publisher and Creative Director Matt Blackett.

Congrats on being voted Best Magazine in blogTO's Best of Independent Toronto survey. When you first started Spacing did you ever think it would be where it is today?

We weren't even sure if we'd do more than one issue, if that gives you some perspective on our long-range thinking back in 2003. We just wanted to get a few issues out there and see where things went. We had a lot of encouragement in the early going and we had a great team of editors, writers and photographers who were willing to forgo pay cheques for the first three or four issues.

We're happy with what we've accomplished so far, but there's lots of room for us to grow.

What's the current size of your readership?

That's private information! We get about 30,000 eyeballs on each issue. Our readers share their copies of the magazine -- they put it in their washrooms and on their coffee tables. We have nearly 2,000 subscribers and sell about 6,000 copies.

In what ways would you like to see Spacing Magazine evolve in the next year or two?

We hope we can increase the magazine's frequency from three times a year to five or six by 2010. But we need to reach about 5,000 or 6,000 subscribers in order to do that. This is probably where our business manager would want me to make a shameless subscription plug. On other fronts, we'd like to publish a few books and expand our blogs into other cities, like we did in Montreal this past fall. 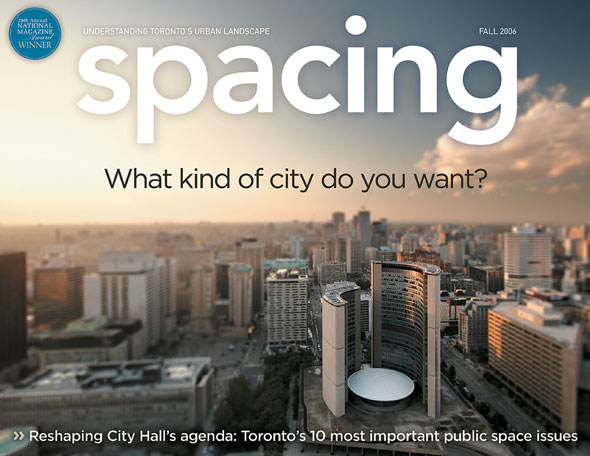 What's your take on the mainstream media landscape in the city. What do you think of Toronto Life?

Toronto has a very vibrant media culture. Some of the mainstream outlets do great stuff, while a handful do a dreadful job. But we're lucky to have so many media options in print: the weeklies, dailies, and all the magazines based here. There's a lot of crap, but the city is packed full of an amazing amount of talent.

As for Toronto Life, I'm not going to get into a pissing match. I like a lot of things about Toronto Life, especially the work of Gerald Hannon, and Spacing contributors John Lorinc and Ryan Bigge who often write for them. I'm just not big into food and restaurant reviews, but obviously their readers are.

How difficult is it to get distribution for Spacing in chains like Indigo and Maison de la Presse Internationale?

It's not that hard when you can show that you sell well on newsstands. We have a 95% sell-through rate on newsstands - the industry average is between 35-45%. We've avoided going into Chapters-Indigo since they only use one distributor, which isn't the company we use.

Our distributor Magazines Canada has to go through its main competitor in order to get its magazines into Chapters' stores. This forces the magazines that Mags Canada distributes to migrate over to the sole-source distributor, which Spacing thinks is completely unfair (I didn't mention collusion).

Also, we created a landscape-oriented magazine which doesn't work well on Chapters newsstands. They'd hide us in the back row anyway, so it just saves us a lot of magazines from going to waste.

This self-imposed isolation allows us to make strong connections with smaller stores like Pages, This Ain't The Rosedale Library, and Ballenford Books. We end up encouraging our readers to go into these locally owned stores, which can't be a bad thing.

We've all read how challenging it is to make a magazine financially viable these days. How has Spacing managed to make it work?

We've been able to make it work by working at other jobs while we run the magazine. I do a range of freelance work (from graphic design to speaking gigs), taught part-time at Humber College for a few years, and now do communication strategy work for an architecture firm a few days a month.

Our editors freelance for numerous publications and work on their own projects. We started the magazine because we wanted to create a dynamic discussion about Toronto's public spaces and found ourselves running a slightly successful business. We're very lucky that our editors and contributors care deeply about the issues covered in the magazine and are willing to produce excellent work for minimal pay. 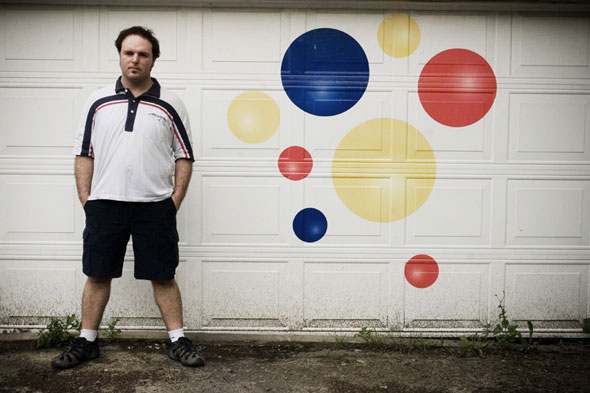 Last year Spacing launched a new blog in Montreal. How's that going so far? Any plans to conquer any other cities?

The Spacing Montreal blog has been great - their audience is growing faster than our Toronto blog did when we started. We lucked out attracting a smart group of writers, especially Chris DeWolf. It allowed us to see that Toronto has it good in a number of ways to Montreal - it seems extremely impossible to access their city hall. They also have bikers to deal with, as well as a very intense language sign law.

As for other cities, we've partnered up with a team of city geeks in Vancouver who are about to launch a Spacing-type blog and magazine called Re:Place. I hope they give us a run for our money. We have a few coals in the fire and hope to see Spacing blogs stretching across the country. We have no interest in starting magazines in other cities - blogs are infinitely cheaper and more flexible.

What other magazines are you a fan of?

I love Maisonneuve and the Next American City. I'm going to admit that I'm a sucker for Time, if only for its design. I also read HOW design magazine to keep my skills sharp.

Thanks to blogTO readers for having good taste in magazines.