Wouldn't it be great if Americans living in Toronto could get together in a bar somewhere and vote in the democratic primary? They can. Tonight! Haven't you always dreamed about going to a bar, grabbing a beer, talking politics, voting and then pulling up a chair to watch the results from over 20 states come pouring in. What a super Super Tuesday!

I voted earlier today (that's me with my ballot above) but polls don't close until 11 p.m. tonight.

The Toronto vote is part of the Democrats Abroad Global Primary taking place February 5th-12th. Voting in Toronto takes place this evening from 8-11 and next Monday, Feb 11 from 6-9 at Elephant and Castle on King St. across from Roy Thomson Hall.

Toronto is one of 13 cities in Canada that will have voting centers for the democratic primary on various days through February 12. 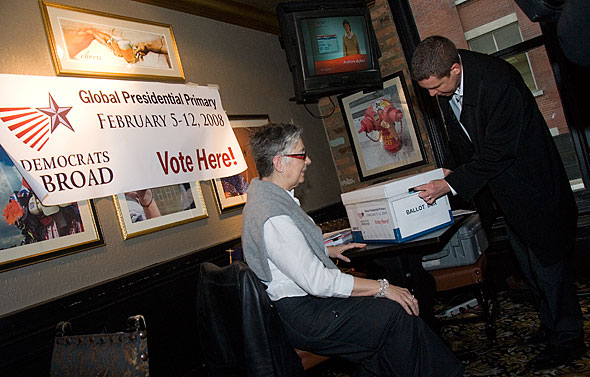 The American primary process is a relatively complicated. If you don't know anything about it, then trust me when I say these votes count towards electing the democratic candidate for this years presidential election. For those who know a little about the process, here is the fine print: "The worldwide election results will determine the 14 delegates who will join eight DNC members in Democrats Abroad's delegation of 22 to the Democratic National Convention. These delegates will be elected at a combination of regional and global meetings held during early 2008. These meetings also provide an opportunity for Americans abroad to shape the party's election platform." (source)

Democrats Abroad is the overseas branch of U.S. Democratic Party and comprised of Americans living in more than 100 countries around the world. Official numbers globally or within Canada are confidential.

I'm a proud dual-citizen and, like I said, voted today. I have to admit, it's a bit strange to actually vote in the back of a bar but was entirely thankful for the convenience of voting in what is proving to be a dramatic democratic two horse race. It was nice to put my two cents in.

You can vote if:

1. You are a U.S. citizen (please bring some U.S. ID, such as passport, social security # or birth certificate

2. You live temporarily or permanently in Canada

3. You have NOT already, or plan to, vote in another state primary, or the DA primary

4. You must be a member of Democrats Abroad. Not a member? You can join on the spot at our Voting Center at the Elephant & Castle.