On This Spot: Bay and Adelaide

Bay Street has been the site of a great deal of panic over this past week. Struggling stock markets have led for some tense times in Toronto's financial centre. This area is normally filled with stress, but this week blood pressures were definitely sent soaring.

Bay Street wasn't always this way, but business has taken place at this intersection for quite some time. 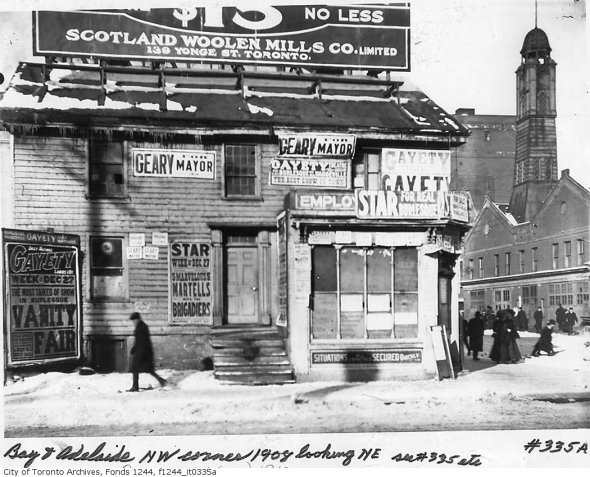 Some photos from the early 1900s show buildings plastered with posters and ads. Photos from the 1920s show Bay Street lined with coffee shops, chocolatiers, restaurants and soda bars. The era of the skyscraper and the office building then touched down on Bay Street, changing the intersection forever. 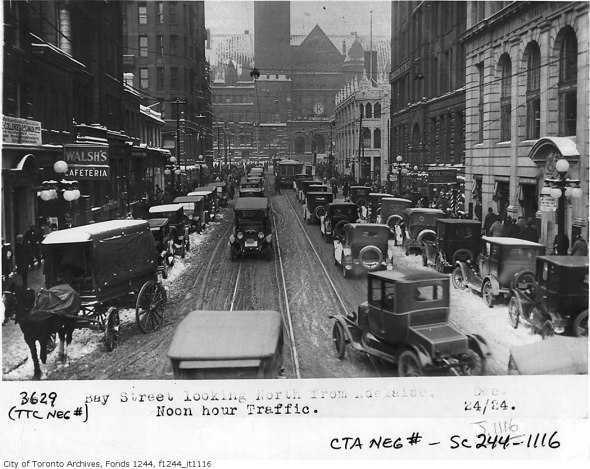 The National Building was completed near the corner of Bay and Adelaide in 1926. It was torn down in December 2006, just months after the building was designated as a heritage property. As part of the heritage designation, the north and west facades of the building will be restored and incorporated into the new Bay-Adelaide Centre, scheduled for completion in 2009.

Another structure torn down to make way for the new skyscraper complex was an unfinished building and a parking garage that many called "The Stump." This structure was originally supposed to be part of a giant office tower that would stand at the corner of Bay and Adelaide. Construction of the building began in 1990, but a recession and economic slowdown in Toronto stopped the project. All that was built was six stories of concrete and an underground parking garage. The cement box remained until 2006.

Nearby, on Richmond Street, is Cloud Gardens. This garden was donated to the city by the developers of the original Bay-Adelaide structure, in exchange for the city allowing the proposed tower to be taller than what was outlined in the city's official plan. On the southeast corner of Bay and Adelaide is the future site of the Trump International Hotel and Tower, which is scheduled for completion in 2010.

Historic Images From: The Toronto Archives.