The Hottest Item On Your Dog's Christmas Wishlist

My mother - invoking her talent for anthropomorphizing her dog Bennie - took an opportunity the other day to ask whether I'd be getting Bennie a Christmas present and informed me that he was expecting one.

He's usually pretty easy to please with a bone, squeaky toy or frozen curbside fast food leftovers, but this year I found out about another option. I'm not sure it's his style, but maybe your dog will dig it - a Toronto company's DVD series designed specifically for dogs.

The "Your Dog Companion" series consists of four different DVDs, each shot from the point of view of a dog and consisting of experiences and adventures that are designed to not only engage and entertain your dog during your absence, but also to aid in their emotional and psychological development - the site claims that they "will help to eliminate mood-oriented conditions such as separation anxiety, loneliness, boredom and fear of isolation that many dogs experience." 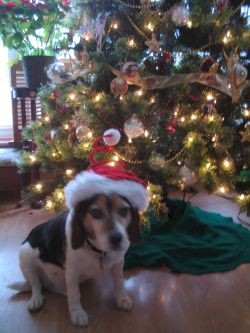 Well, our Bennie in particular was rescued from abuse and abandonment in the wilds of the Kawarthas, and he's never quite made up his mind about whether he's a bouncy house pup or a deranged forest wolf, so even if these DVDs manage to do what they claim for dogs with normal psychological makeups, I'm not at all sure that he'd respond the same. (If you toss him a doggie treat or toy, he ducks - he doesn't totally get a lot of this dog stuff.)

His special case aside, I'm still kind of concerned about some of the implications of these virtual dogsperiences. The Globe and Mail is quoted on the site as saying, "The clucking and flapping drove one subject (okay, my dog) to the window, where she vigilantly scanned the city streets for roosters."

Dog owners, tell me if you can relate to me here - I've had "normal" dogs in the past, and as I recall it's always been a dangerous and hectic situation whenever some unlocatable noise excites a dog in a living room. They react by flipping out in every direction they can think of, barking and yowling and trying to climb through screen windows, am I right? I'm not really sure that's the type of entertainment I want to be securing for my dog while I'm out of the house.

Calls placed to their Toronto office for more information haven't yet been returned, so I can't give you their response to that set of concerns, nor provide answers to other burning questions like "What is that thing around Stanley Coren's neck in all the website videos?"

However, I'm not comfortable writing the whole thing off as nonsense either. Stanley Coren - Dr. Stanley Coren, at that - has a pretty impressive set of credentials to his name, including a PhD and professorship in psychology, a pile of research into psychology and perception, 14 books including course materials, and awards and honours relating to both general psychology and dog obedience in particular.

Unfortunately, I know my dog would eat them before they made it into the DVD player. If anyone else is finding themselves overwhelmed with puppy-eyes-related guilt and decides to order part or all of this therapeutic set, please do report back on the results... or if the dog even notices that the television is on at all.

Photos of Bennie while he briefly held still before ripping his hat to shreds by Chris Orbz.