I've been going to the Royal Agricultural Winter Fair for years now with my sister and my nieces. It's the largest indoor combined agricultural, horticultural, canine and equestrian event in the world, and gives city types a glimpse into country living. This year's Fair runs through until Sunday (only two days left!) in the Direct Energy Centre at Exhibition Place.

The Royal attracts competitors and exhibitors from Canada, the U.S. and overseas. 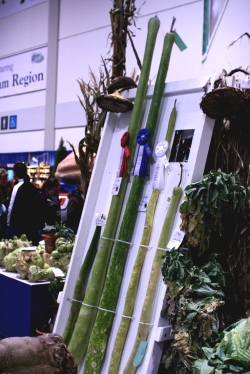 Check out the giant zucchini in the photo on the right. The Giant Vegetable Competition exhibit is always one of my favourites, bringing to mind scenes from Wallace & Gromit in The Curse Of The Were-Rabbit. I'm curious about how they get these vegetables to grow so huge but even more curious about how they manage to get them to the Fair intact.

One of the reasons I like the Royal is because I always come away with a deeper appreciation of those who work in the agriculture industry. Many of us take the conveniently packaged meat and produce in our grocery stores for granted, not really thinking about where it came from or how it got there.

This year, the Fair expanded with an additional 60,000 square feet of space. I noticed that the hugely popular IAMS SuperDogs show was held in a new space with hundreds of extra seats. I also noticed that it's also a much LOUDER show. We were trying to have lunch in the food area nearby; conversation was impossible until the show was over. They'll be performing tomorrow at 10:30, 12:30, 5 and 7pm, then on Sunday at 12 noon, 2:15, and 4:30 pm. (Be sure to verify show times when you get to the Royal in case any have changed.)

Another of my fave exhibits: the Butter Sculpture Competition. Gay Lea donates the butter, and art students do the sculpting; each students gets 25 kg to work with, and they have from 8:30-5:30 pm. 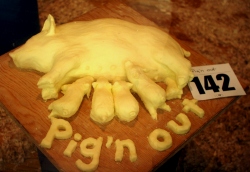 If you like shopping, there are a ton of booths in the Royal Shops area including crafts, art, clothing, home items, leather products and specialty foods. And when you're hungry, you can opt to eat in one of several restaurant areas. Most are family-oriented but there are also places clearly geared more to adults, like the Hitching Ring Cafe & Bar: a new restaurant that's open for lunch and dinner (for reservations, call 416-263-3979). 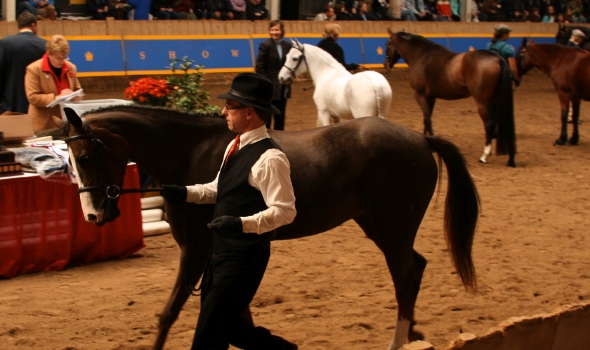 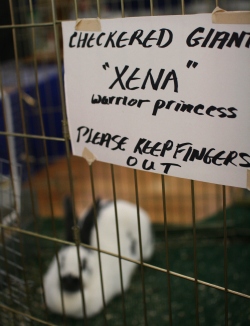 Horses are one of the main themes of the Fair. There are horse-related items for sale everywhere, from saddles to horsey clothing to horse-themed toys and souvenirs. The Royal features several horse competitions and shows; some are included in the price of your General Admission ticket but others (like the Canadian Dressage Freestyle Championships and the Carriage Racing Derby) require separate Horse show tickets.

You can find many other animals at the Fair, of course, like Xena The Warrior Rabbit pictured on the right. And cows! Lots and lots of cows.

Some animals are available for petting and feeding, though I was relieved to find that the Petting Farm had been revamped. This year, visitors can no longer freely wander through the Petting Zoo (imagine hordes of sometimes overly-eager youngsters grabbing at animals), but pet them from outside the fenced enclosure. When any particular animal has had enough, they can retreat.

The Royal Agricultural Winter Fair has been sometimes described as the "Olympics" of Canadian agriculture. I was amused by this comparison at first, but couldn't help but get caught up in the spirit while I was watching the various animals getting judged, and how their human handlers managed.

The Royal has apparently garnered a stellar reputation for producing some of the most sought after livestock and crops. 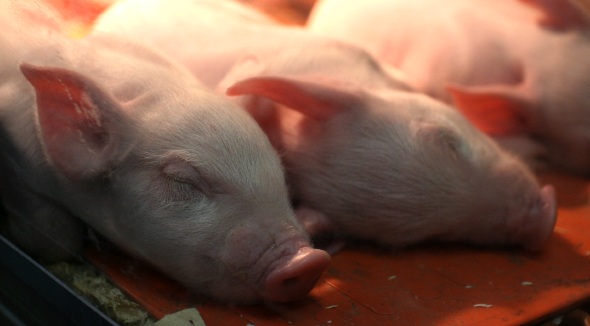 Above: Look, it's Wilbur! Though I suspect the little guy isn't going to be as lucky as the hero of Charlotte's Web; he and his snoozing siblings were part of a display in the Pork/Bacon exhibit. 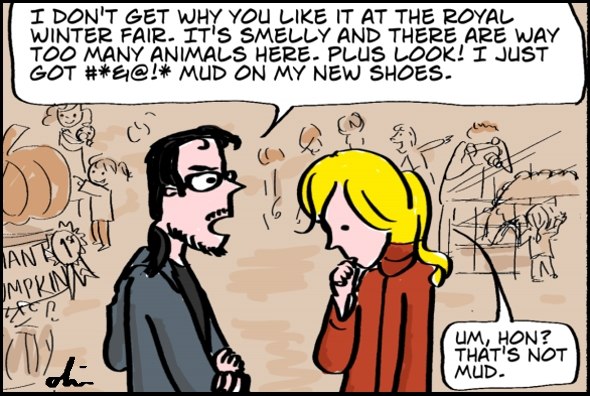