CiRCA Gets the Gay Vote

While Tim stopped by Peter Gatien's much-hyped super bar CiRCA a couple weeks ago as part of their media launch, now that the dust has settled and people have had a chance to see what all the fuss is about, there is something pretty remarkable going down on John Street. Toronto is loving this place.

I don't typically venture out of my usual salvo of bars and clubs in the city, but I had to make an exception when I heard all the buzz surrounding CiRCA. What's most surprising about this fortress-sized (formerly Pladium-occupied) club is that it is a severe and welcome departure from the traditionally intimidating, hostile, and frankly, homophobic culture in Clubland.

To say that I was hesitant to venture into the area would truly be an understatement. My last experience on John Street was a friend's birthday at Inside Nightclub where a veritable swarm of creepy guys crawled out of the shadows around 1am to prey on the girls in the group. Needless to say, I spent the rest of the night playing faux-boyfriend and the next day trying to cleanse myself from the filth of that place.

Who said stadium lights were a bad idea? I wasn't kidding when I made an analogy to roaches. 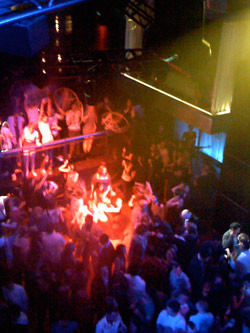 So what makes CiRCA different? It's situated right in the midst of the existing, erm, establishments, and from the outside it's nothing spectacular. The difference that I see with CiRCA is the way that they have positioned it for the city. It's an accessible club, if there is such a thing, and I'd venture so far as to say inclusive.

The owners quite cleverly have decided to leverage the staying power of the gay community to get the club up on its feet. Besides one or two other clubs, namely El Convento Rico, Toronto hasn't seen a successful bar that's inclusive to both gays and straights for quite some time.

This is why it's so hard to believe that, within weeks of its opening, CiRCA has managed to win over a good chunk of Toronto's gay club-go'ers and in the Entertainment District no less. I've heard some scattered talk of gay bashing at CiRCA in its first few weeks, but overall from friends and acquaintances, I've heard nothing but praise and excitement. I won't go as far as to say that every guy and girl of a certain sexual persuasion are raving about CiRCA, but there's a definite good vibe surrounding it.

Calling on the expertise of well-known gay event promoters like Matt Sims seems to have been a hit for CiRCA. Friday night's Mirror Ballroom event had the upper floors packed with crowds getting down to house music. Not a fan of house? Just venture off into any of the other environments within CiRCA, and you'll surely find something that aligns with your taste in tunes.

Though the unisex washroom idea seems to have vanished entirely due to, no doubt, an entirely too up-tight vocal minority, my night at CiRCA saw guys and gals, straights and gays partying it up together. Three cheers for inclusion.

All that being said, it's entirely plausible that the enormous early following and success behind CiRCA could be attributed to a languishing scene in Toronto's Gay Village. Despite relaunches of bars like The Barn and the club formerly known as Babylon and 5ive, bars that are left standing after a series of closures are clearly lacking vision and exude a truly stale and tired atmosphere.

Toronto's bar and club scene, as well as its gay scene are definitely in need of a shot in the arm. It doesn't take much to see that after spending a weekend at any of the numerous multi-story bars in Montreal. CiRCA is a step in the right direction, and the question now remains whether its owners can sustain an environment that is sparing no expense to draw in the crowds.