Smug Torontonian social media enthusiasts have reason to curse the digital gods today, as our fair city has slipped behind London, England as the Facebook network with the most members. Not only does this damage our credibility as a wired city, but also likely feeds into some vestigial colonial inferiority complex.

Toronto's second place status was first reported in the Guardian. Apparently, London overtook TO sometime last week. As of 11:30AM this morning, London had 798,165 members, and Toronto only 702,719.

"We aren't able to pinpoint a specific reason for the rapid growth in one regional network over another, other than the fact it matches our overall pattern of growing exponentially," said Facebook rep Matt Hicks in the Guardian. 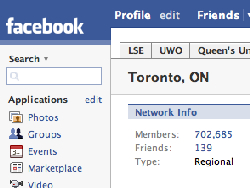 Of course, granting London the 'biggest network' title based on number of members isn't exactly fair. As a proportion of population, Toronto still rules the Facebook roost- 28.3 per cent of Torontonians are members, as opposed to only 11.1 per cent of Londoners (based on 2001 census data). I'm not quite sure how to interpret this data. Either we're super plugged into emerging digital trends, or have a city-wide aversion to face-to-face contact. So chin up, Toronto! We may be in the midst of a budget crunch, but a fanatically high proportion of our city is posting on walls and poking itself online.