On This Spot: Yonge & Front

While hockey season has been over for a while now, fans are already talking about the upcoming season. With the NHL entry draft taking place on Friday and the start of free agency looming every NHL team is looking to add some talented players to their rosters. Many teams hope that the young players they selected on Friday turn out to be outstanding talents worthy of one day entering the Hockey Hall of Fame. Looking towards this magnificent building at the corner of Yonge and Front is where we also find this week's On This Spot.

Construction began on what is now known as the MCI Great Hall in 1885. The building was originally used as the head office for the Bank of Montreal. Much of the area surrounding the building was destroyed in the Great Toronto Fire in 1904.

There are rumours that the old bank building is haunted. The rumours say that Dorothy, a bank teller in the 1950s, shot herself in the head in an upstairs women's washroom over a failed relationship with a co-worker. Some say that an apparition of a woman can be seen wandering the halls and sometimes looking out the building's upstairs window. 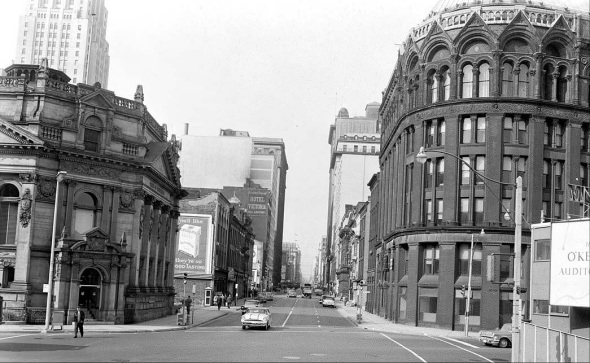 If one were to walk through the area now you would find yourself in one of the busiest areas in Toronto. Union Station is just west of this grand building and it's typical that you will see hundreds of people rushing down the street, frantically trying to get where they need to go.

Modern-day Union Station was completed 40 years after the bank was built, but area had long been a transportation hub in the city. Previous incarnations of Union Station have always stood in this area, ensuring that Front Street remained a bustling area for the majority of Toronto's history.

Around the time of the Great Fire the area was the heart of Toronto's warehouse, manufacturing, and industrial industries. As the area south of Front Street was filled in, the neighbourhood became a prime commercial area in Toronto. O'Keefe Centre (now Hummingbird Centre, but soon to be something else) was opened in 1960.

Unfortunately, many of the buildings that were built just prior to the fire, or managed to survive the fire, have been since torn down. The Romanesque office building that once was part of the original Union Station was torn down in 1931. As you can see from the photo, the building just east of the Great Hall has since been replaced by a large glass office building. The building of O'Keefe Centre itself resulted in tearing down numerous structures.

And the area will continue to change in the future. Daniel Libeskind's L Tower will be coming to the area in the next few years.