A plan unveiled by Bill Clinton will give Toronto millions of dollars in order to make the city more green. Funny, the province and feds can't cough up the dollars for the TTC, but a former American president has no qualms in helping us create energy-efficient buildings. The province, did, however, cough up $52,000 to test a recycling program in Toronto apartments: it's a start.

Malcolm in the Middle star Frankie Muniz is going to be racing in the Toronto Grand Prix. Something tells me someone's acting career is all washed up.

Guns, knives, hammers, and now...swords? Yesterday's shooting of a man who came at police with a sword is one of many sword-related incidents in North America over the past few days.

Malik Zulu Shabazz may have been denied entry to Canada and couldn't give a lecture at Ryerson, but that doesn't mean the show didn't go on: Black Youth Taking Action president Nkem Anizor decided to give a history and politics lesson to the media herself.

With a lot of the money going to professional schools and faculties these days, it's nice to know some people realize that English departments need money too. Chancellor Emeritus Hal Jackman donated another $15 million to create a Humanities Institute at my alma mater.

Stop buying chocolate-covered almonds and magazine subscriptions: soon, individual school fundraising will be banned if Rosario Marchese has his way.

Looks like the Jays just needed some healing rain in the city to put some spring back into their step. AJ Burnett pitched a complete game to complete the sweep against the Orioles yesterday. 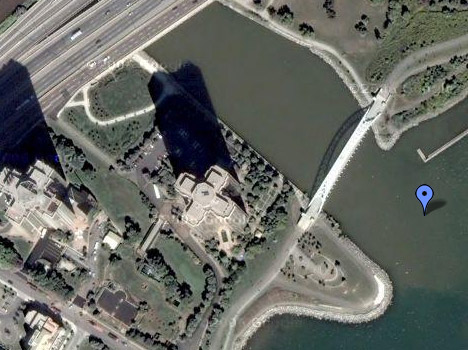 Yesterday's answer: The Algobay, Cherry St south of Polson St. in the Portlands