The UnderTOw: The Fever Sheds

While on my way to a meeting a few weeks ago, I walked by a bit of public art that I must have passed hundreds of times without ever really noticing. Located on the south side of King Street, just east of John, there's a small parkette that also serves as the patio of the restaurant on the ground floor of Metro Hall. The south end of the parkette is bounded by the building itself, but the north side is hemmed in by a strip of linear landscaping that's bracketed by two small, opaque sheds.

The buildings are probably utility sheds for the park's grounds-keeping staff, but they are black echoes of the structures that once stood across the intersection, behind the site of the original York General Hospital (and now the future home of Festival Tower). The original sheds, 72 feet long by 25 feet wide and numbering in the teens, were either temporary homes for sick immigrants on the mend, or the last place they drew breath before being taken away by death. 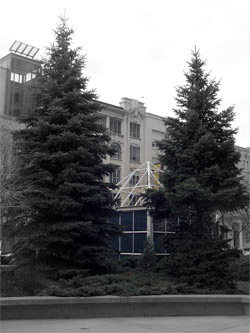 In 1847, nearly 40 000 Irish immigrants arrived on Toronto's waterfront seeking respite from An Gorta M贸r. Although Canada represented the only hope to many Irish immigrants, the journey was nearly as dangerous as staying on the famine-stricken island, and "Black '47" remains a dark chapter in Toronto's history. On June 21st of this year, a new park will open on the foot of Bathurst Street to commemorate those who died as a result of the Great Famine, but for now these mysterious structures on King Street are the most public reminders about the trauma that unfolded here 160 summers ago.

To escape Ireland, many immigrants stuffed themselves into crowded ships with little in the way of sanitation, where "ships fever" was rampant. Transmitted by body lice, the often fatal sickness physically ravaged its victims, leaving them with body sores, headaches, and causing organ failure. To deal with the mass numbers of incoming sick people, the city erected these fever sheds for the purposes of both convalescence and quarantine. By the end of the year, 1 100 Irish immigrants lay buried in Toronto.

The sheds on King show both the darkness and the light of the moment in time they capture. If you consider the entire piece as a single shed, it is an apt metaphor for the dark summer that claimed so many lives. Both ends are opaque, as if covered by palls, and their skeletal roofs remind of the starvation that caused the mass exodus. The space in between the two ends, however, is filled with an elevated garden that symbolizes the growth and rebirth enjoyed by those who did manage to survive the journey, and the hope that this place must have represented. 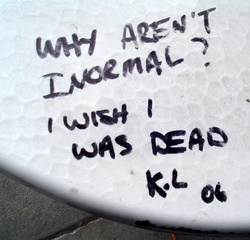 As I walked around the patio, trying to imagine how the northwest corner would have looked covered in row upon row of these fever sheds, I found it almost impossible to envision this chapter in the city's history. Looking on one of the tables on the patio, I noticed somebody had etched these words: "Why aren't I normal? I wish I was dead." Although it's unlikely the person who wrote it knew of the fever sheds and the tragedy that took place on this same corner, I couldn't help but think of it as another echo of the desperation and horror of those days, as if it had somehow seeped into the surrounding area, infecting someone with a different kind of fever. I hope whoever wrote it noticed that the garden and trees stretch much higher than the pointed roofs of the sheds.

The UnderTOw is a weekly column that asks the question, "How'd That Get There?" It explores the landmarks in Toronto's public spaces that act as metaphors in the city's story and run like a current beneath the urban landscape.