Ontario is considering changing the system of organ donation by giving living donors a little bit of money for their spare parts. The aim is to ease the burden on donors, increase donor counts, and put an end to the "waking up in a bathtub full of ice" urban legend.

Two Toronto strippers are suing three former Milwaukee Bucks players, the team, and (get this..) the NBA for $18million in damages after an altercation took place outside "For Your Eyes Only" in 2003. If they win this outrageous claim in full, I vow quit my job at blogTO and become a famous person-suing stripper.

Doggy doo doo accounts for about 1/4th of waste landing in city park garbage cans. The city is proposing changes to the law that may end up having dog owners bring their pet's poop home with them (to the green bin). It'll be tough to teach an old dog owner new tricks.

This fall, delinquent students (who under current "zero-tolerance" rules would be expelled from school) will be given fairer opportunity to make things right and stay in school. The current system has been shown to discriminatory towards visible minorities and low-income students.

Winter simply refuses to quit, and we're expected to see up to 10cm of wet snow tonight/tomorrow. Most of the snow will not accumulate, but will make for slippery road conditions. 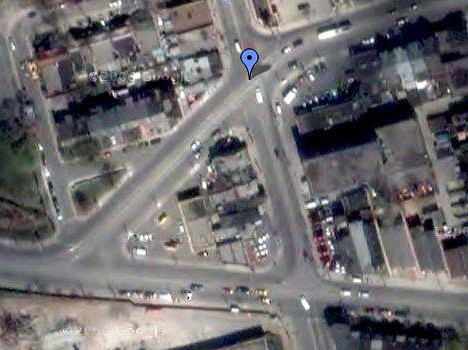 Think you know the city like the back of your hand? Where is this? Post your answer in the comments (and make your eyes go out of focus so you don't accidentally see the answer in a previous comment).