West-enders (and smart commuters that choose Lakeshore over the Gardiner on their way into the city) will notice a slight change to the landscape at Windermere the next time they pass by.

Back in September 2006, the city approved the very expensive and very short distance move of the decaying heritage landmark "Joy Oil Station" - a relocating and stabilizing project that required a whopping $400,000 in city funding (still no word on how much more it will cost to restore it).

This weekend, heavy equipment was brought in to hoist up part of the building and drop it just across the street, in Sir Casimir Gzowski Park of the Western Beaches. 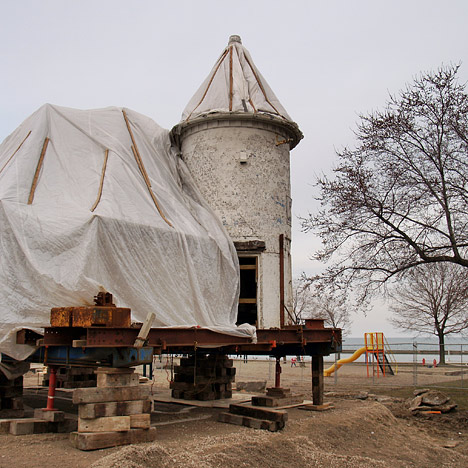 Formerly on the north side of Lakeshore Blvd, the castle-like, plastic-covered, rotting remains of what represents the last standing relic of an American chain of gas stations built in the 1930's in Toronto, is now sitting in a very sad state on the south side of Lakshore Blvd (within a stone's throw from a playground).

According to a community newspaper, the grounds where the station originally sat were intended for use by developers to build affordable housing, but site surveys found that the grounds are so badly contaminated that the housing project is unfeasable.

The building was declared a historic site in 1989 by the City of Toronto under the Ontario Heritage Act, and the land was acquired in 1995. The whole while, the city essentially let it sit there rotting. Now they plan to spend plenty of more money (in addition to the $0.4million it cost to relocate it) to pretty it up.

While I'm all for the preservation and reassignment of historical buildings in Toronto, this restoration project really bothers me. Sure, the building embodies architectural oddities and historical significance (arguably), but the approach is deplorable. Why did it take 18 years to do something about the building's decaying state? Why are we only now willing to salvage, at a high cost, what ultimately represents an icon of early American oil imperialism in "one of the greenest and most creative cities in North America"?

Update (April 17, 2007):
The Star is reporting that once restored, it'll become a concession stand and a tourist info center. 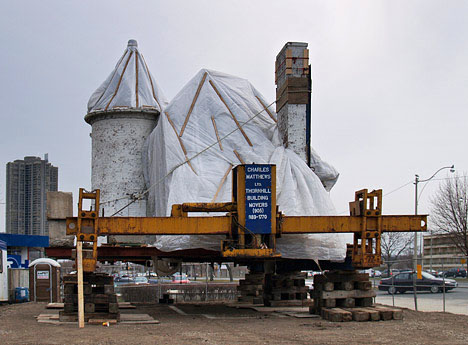