TTC Unveils its Plan for the Future - LRTs

The Toronto Transit Commission (TTC) is pitching a new plan and redefining their acronym to dramatically change the way our city transit system operates. They're calling it TTC - Toronto Transit City.

What's the plan? The elaborate, expensive, and complete plan calls for a vast web-like network of above-ground Light Rail Transit vehicles (LRTs), mostly operating within right-or-way (ROW) lanes, to connect the far corners of the city to existing subway routes.

Citing the obvious problems of pollution and climate change, the isolation of communities (and the airport) surrounding the downtown core, and worsening traffic problems on our roads, the plan appears to be well thought out, and the results (in theory) effective.

But how much will it cost? When would it be completed? How will we pay for it? 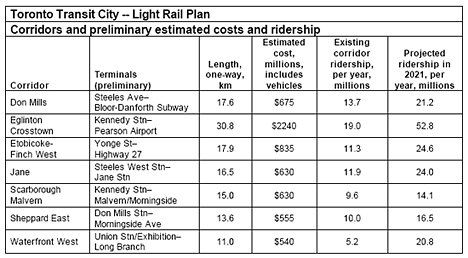 The entire project adds up to:
* 120km of track to be laid at $30million/kilometre (about 1/10th the cost of underground subway)
* 240 light rail vehicles
* $6 billion in capital required for construction and the vehicles
* 15 years of work

The plan relies heavily (an understatement) on funding from all levels of government.

The full report can be accessed here (pdf), and more info and extensive discussions found on the Spacing Wire.