The Undertow: The Taddle Creek Trough

We often walk through the city as if it's an obstacle between two destinations, ignoring the sights and sounds we encounter along the way. But, just as with any other kind of travel, it's important to remember that the journey is half the fun. Earlier this week I saw this curious pigeon picking her way across the grass in Philosopher's Walk, and the slowness with which she moved reminded me of why it's so important to take time on these journeys. Or maybe I was just happy that the kind of weather that lets you idly watch pigeons doing nothing had returned.

Something else I noticed was that she was following a line in the earth that traces a scar in the landscape, one so subtle you could easily walk by it if you didn't know what it was. Like so many of the almost imperceivable nuances in the city, this trough is a reminder of the Toronto's ever-changing landscape, and the secrets that hide beneath our hurriedly shifting feet. 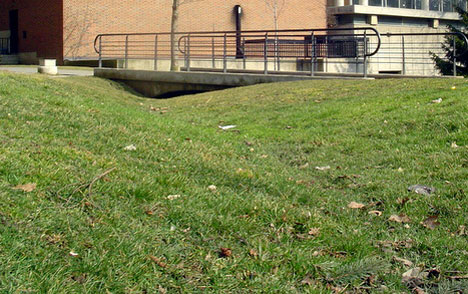 The trough is one of the banks of the now-disappeared Taddle Creek, whose course is echoed by the footpath in the park. Although the creek has been stuffed underground, the sucked-down earth reminds us of the past like the path of a river run dry. Just south of the ROM the tiny dent becomes a full-fledged ravine that runs all the way down to Trinity College, but I prefer the subtlety of those first small dips in the ground. You could trip over them if you weren't being careful.

The Lost Rivers website does a remarkable job of telling the stories of not just Taddle Creek, but all the other creeks, rivers, and streams that bubble in quicksand beneath the concrete crust of the city. This section of Taddle Creek, University Reach, has a special significance; it's the place where the above-ground sewer that the 6 km creek had become was finally buried for good in 1884.

These creases in the land remind us of the kind of place this once was, and the histories and mysteries that run beneath our busy feet. Perhaps most importantly, they keep our imaginations active, and our capricious pigeons happy.

The Undertow is a weekly column that asks the question, "How'd That Get There?" It explores the landmarks in Toronto's public spaces that act as metaphors in the city's story, running like a current beneath the urban landscape.

Both images by me, happily struck by the emergence of spring.