So . . . jobs and general chaos have put me a day behind in reporting this, but in case you missed it: the submissions for the City of Toronto's street furniture design competition are in. Thanks to some diligent work by Joe Clark, the renderings by the three finalists can be seen on Flickr.

The submissions include designs for the various sized transit shelters, information kiosks, bike racks, benches, and garbage receptacles around the city. To keep things brief I've highlighted one feature from each company, but I recommend having a look at each individual submission to get an idea of the bigger picture. 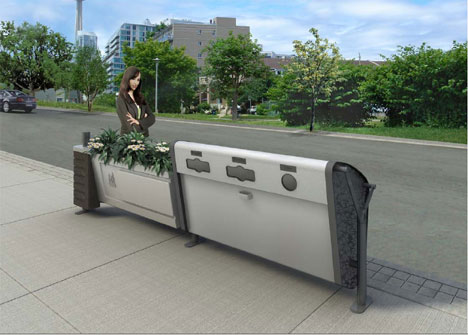 On the whole, I'd have to say I like the Clear Channel designs the best. Their public washroom (see top image) is the best in that category, and the inclusion of a planter on the advertising board attached to their garbage bins (above) counteracts the visual pollution that the advertising will create, which is probably a fair trade-off. 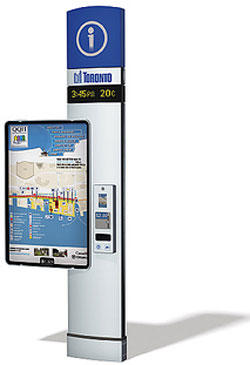 I thought the submission by CBS Outdoor was the least interesting, although their info pillar is one of the stronger submissions in that category (see image at right). The pillar isn't overly intrusive, and its smaller design means it's not likely to be as much of a front for advertising as the current info pillars in the city. I also like how the rendering includes a local map of the area it describes instead of the entire-downtown-Toronto map that appears on the current pillars.

Occupying the middle-ground for me is the submission by Astral Media. They have the most interesting design for bike parking (see image below), making the two-bike post look like the legs of a crouching insect. Although Toronto's post-and-ring design is already a nice piece of local street furniture that will surely remain on our streets, these are a nice contemporary twist on the idea. The same cannot be said for the rest of Astral Media's designs, though, which boast the same general blandness as the designs by CBS. 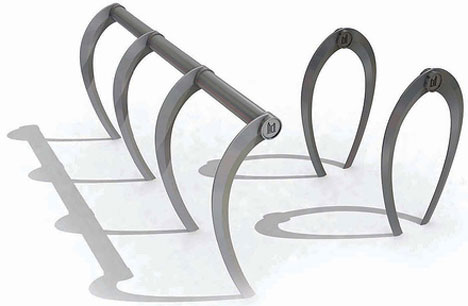 I suppose the function of street furniture has to be taken into consideration well before the form, but I would have liked to see some more creativity; with a few exceptions, none of the designs are very different from what we have right now. Given that the winning company will be given a 20-year contract, it would have been nice to see some submissions that brought some more imagination to Toronto's public realm. What do you think? Feel free to drop a comment below.