Last night the winner of the Nathan Phillips Square design competition was announced. The team of Plant Architects & Shore Tilbe Irwin was given the honour, and the applause that greeted the announcement indicated they had a great deal of the public's support.

While my preference was for the Rogers Marvel proposal, I had a strong feeling Plant was going to be the winner. The team's emphasis on greening up the square was likely what put them over the edge, and their design should be an appropriate doorstep for a city hoping to be among the greenest in the world. The City has kicked in $16 million dollars for the competition, so now there's just the small detail of raising another $24 million to finish the job... 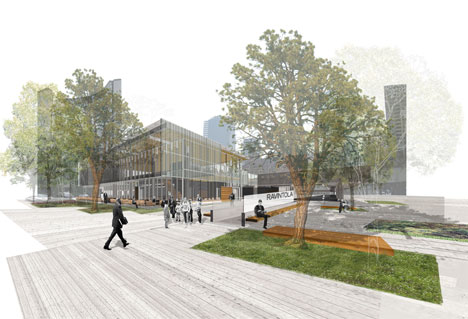 Over 400 people attended the competition presentations two weeks ago, and over 900 provided feedback in the form of comment cards. Among the jury's requests was the suggestion that funds from the parking garage beneath the square be used to make sure it's always well-maintained. They also reminded the City that the public square should always remain public, and should never allow franchises or advertising into the space (to which there was a huge round of applause).

More information about the design can be found on the city's website.

Images by the winning team, courtesy the City of Toronto.