The Undertow: The Cameron House Tenants

Many pieces of Toronto's public art are government-commissioned works that tie into the history or community of a neighbourhood. While I'm all for official contributions to the cityscape, there's always something satisfying about finding those corners of the city marked by unofficial artistic contributions. Laneways filled with graffiti-murals or stencil art are obvious examples, but you don't always have to head down an alley to get your unofficial art fix. Sometimes a work becomes so entrenched in the environment that it begins to feel as worthy of a plaque as the monuments that decorate the city like the dispersed chapters of a history book. The ants on Queen Street West's Cameron House are one of of these, and their origin is one of the more oft-told tales of the area for good reason: it's not every day you come across a story that involves the City's Building Department, an "artmusictheatrebar," and Pope John Paul II. 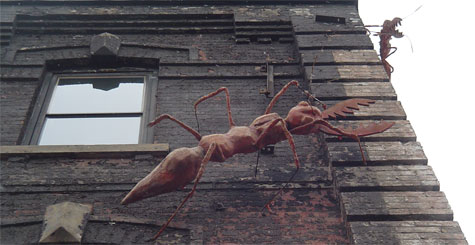 The stretch of Queen Street West between Bathurst and Spadina is a funny place - you can stand there and guess which part of the city is gentrifying its way over faster. With high-density development planned for West Queen West and several buildings demolished on both sides of Spadina, the fabric shops and used-book stores have begun closing down pretty quickly. But an institution that hasn't moved an inch is the venerable Cameron House, which has had a contingent of ten enormous insects protecting it for over twenty years. 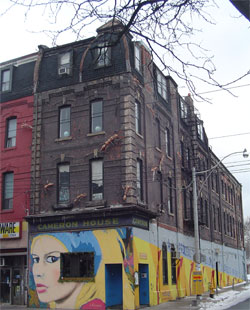 In 1984 the Cameron House was having a bit of trouble with City Hall, which had declared that the rooms above the ground floor were "illegal dwellings." The management had been toying with ideas on how to draw attention to the institution (and its problems with the City) when preparations for Pope John Paul II's papal visit were under way. The route for the Pope's motorcade went straight past the Cameron House, and so it was hoped that painting the building the papal colours of purple and gold would get some attention. Resident artist Napoleon Brousseau had also wanted to include ants in the attention-grabbing stunt, motivated by the insect galleries at the ROM during his time as a security guard there. When a city inspector came into the Cameron House inquiring about "tenants," the excuse to plant "ten ants" on the building was born.

The desired media attention did come, but only as an indirect consequence of the installation. Manager Paul Sannella had written the Archdiocese of Toronto requesting the Pope bless the Cameron as he passed it, a request the Archdiocese strongly denied. The denying letter made the rounds and found its way to a Toronto Star reporter, whose story included the explanation of the Cameron House's problems with the City. Not long after media attention died down, the city allowed the Cameron House to maintain residential dwellings, and the tenants (and the ten ants) are still there today. Who says art never changes anything?

Top photo courtesy of Tanja. The rest are all me.