Radical Illumination, Whatcha Gonna Do When They Come For You?

Kevin and Lori's little brainchild certainly garnered a lot of attention. Several hundred people descended upon Queen and Spadina at a little past 11pm on December 8th, and they were accompanied by frustrated motorists (though a few honked with glee), a Global News van, and a few squad cars worth of Toronto's men in blue.

A small recap and more pics, after the jump.

--
I supposed it was bound to happen. Radical Illumination promised to bring together a large unruly group of people, and the organizers were going to give said group of unrulies flashing pieces of charmingly home made electronics to throw at stuff in the streets. The promise of an outdoor mobile rave after the throwies were launched certainly attracted a few glances from the police department as well.

The event started pretty peachy keen; Kevin and Lori announced they were about to start giving out the throwies, and that our targets were going to be unsuspecting streetcars traveling on the 510 line going along Spadina. 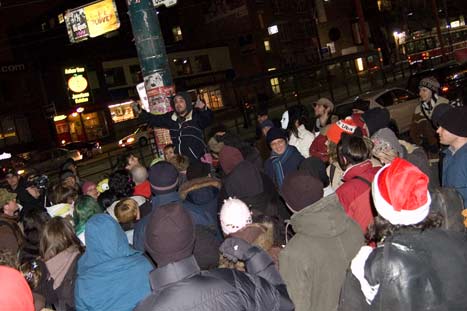 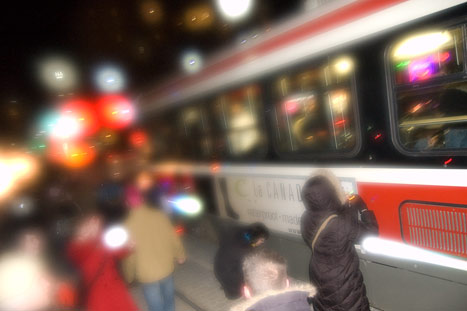 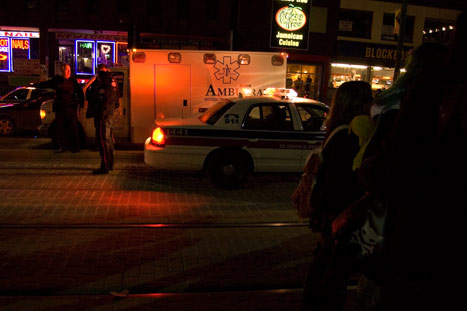 Everyone was given a few throwies each, to be launched at the ferro-magnetic side of the TTC vehicles. Indeed, it was a lot of fun, especially when you have a streetcar driver maniacally sounding his horn and unsure of whether to stop or go. The first car was absolutely 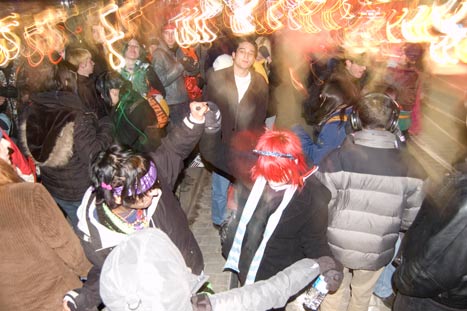 , and did indeed glow a shiny spectrum of mischievous colours. 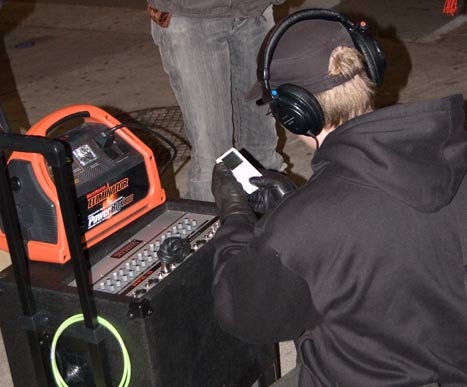 It soon became apparent, however, to the crowd that police were going to intervene. It must be said that the fuzz were actually pretty cool about the whole thing. No one was arrested at Queen and Spadina that I or anyone I spoke to could see. A few adventurous folk even walked over to the cruisers and (gently) placed a couple of the throwies, I'd like to think in thanks for the police not going medieval on the high spirited crowd.

One thing that happened was the 510 streetcar line was shut down for at least a good half hour to forty-five minutes while Uberrave pumped out some hard hitting electronica. In response, the only thing the assembled Illuminati could do was get down and move it all around on the TTC tracks.

Not long after I took that last shot, the crowd started to divide itself up as if guided by the will of a divine force. I decided to stick with the music men, as if I wanted to keep getting my groove on, it's best to have a front row seat. Orders were being sent over phones about where the mystery location of the rave was set to be. Eventually it was decided we had to walk all the way to Bloor, in the 25 km/h winds. It was a long walk. All was relatively well and good until the music stopped, dead in the streets. Upon close examination, it was determined that the iPod pumping out the beats was likely frozen. After a brief moment of utter despair, someone whipped out their own iPod, and Super Furry Animals was played quite loudly for the benefit of Downtown Toronto at midnight.

Upon arriving at our target destination (it was to be an underground parking lot rave!), the news was spilled that the Five-0 had followed us and were inside the garage, preventing the climax from even beginning. It was then decided to head to Bathurst Street Bridge. Now, after being outside for a good two and a half hours in the decidedly chilly weather, I was stiffer than Madonna's performance in Die Another Day (ba-dum, cha!), so I decided to call it a night rather than continue the trek, possibly into the clutches of Toronto's Finest yet again. With that, I leave it to the comments section to fill me in on all the sordid details I missed out from 2am until whenever it all ended. Thanks again to Newmindspace for yet another not-so-easily forgotten evening of pure madness, much to the joy of everyone involved!

Photos from Ryan C. and his still cold digi-slr. Be sure to tag your photos you upload to Flickr and the BlogTO pool with "newmindspace" and "radicalillumination"; no spaces!