Yep, Santa stops at the DeSario house... it even says so in lights. But the poor guy will have a little trouble landing with all the mind-boggling decorations up there on the roof.

Being one of the biggest and brightest displays in all of Toronto, you may recognize this Keele & Sheppard area house from television. It's seen its fair bit of media coverage this year but all of that attention is not without a good purpose. The family, in conjunction with the display, also accepts public donations for Sick Children's Hospital... and they've already donated thousands. 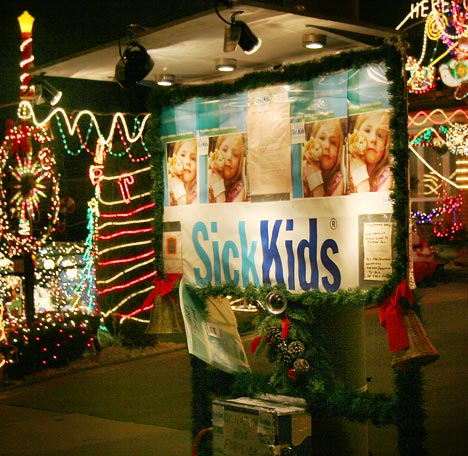 Driving there, I got to see a lot of great light displays in this neighbourhood... and while my friend at the wheel kept pointing at bright homes saying, "Is that it?", "Is that it??", when we finally came to IT, there was no mistaking the glow of this home.

Just then a plane flies by overhead and I wonder if the passengers are squinting out their windows and pointing too.

The DeSario family has put a lot of work into this show. In photos, it seems a bit chaotic, and sure, there are some crazy parts, but in person it's just pure happiness. We couldn't help but laugh at ourselves when we realized we were open-mouth-smiling like little kids.

Every holiday icon, both traditional and secular, is somewhere in the thick of it. With 2 lawns (which are still very green in this weather), a large house, two garage doors, and some trees, there really is room for everyone.

At the top of the driveway sit several characters including a snowman with an LED sign above him. When you approach the life-sized Frosty, he breaks out into song and dance. (Sidenote: I wish I'd known that before it freaked me right out)

The LED sign, which also lights up, fills you in on details about the fundraising effort. A nice touch.

Want to see it for yourself? The house is located at 165 Benjamin Boake Trail. 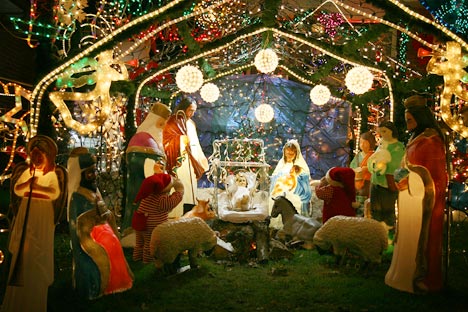 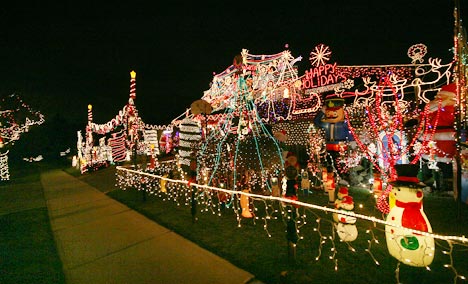