True Story: I was walking at the foot of Bay Street, when I noticed hordes of people pointing up to the sky. What was it? Dare-Devils? Eco-protestors? Terrorists?

I looked up but didn't see anything out of the ordinary. Then it hit me: the tourists were pointing up at the the CN Tower.

I had officially lived in Toronto long enough to no longer see the CN Tower without really looking. Can one therefore get as much mileage out of this city's attractions as the person visiting with fresh eyes?

We were on the last leg of our CityPass touristy tour. We had already visited the ROM, Casa Loma, the Ontario Science Centre, the AGO, and the Toronto Zoo. We had accomplished this (exhausting) feat in nine days.

We had planned to visit the CN Tower at the end of our tour, a big mistake as the latter part of our sightseeing was overcast and foggy. Too late to go back in time for a clearer day now. 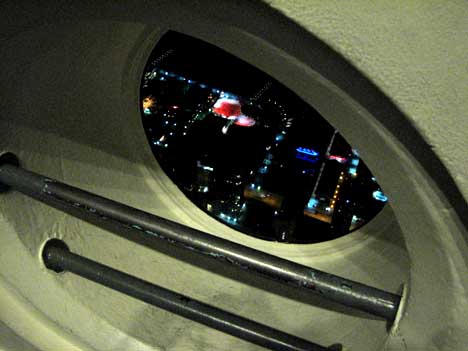 A birds-eye view of Harbourfront Centre.

The CityPass ticket included ascent to the Skypod for the best view of the city. The best vantage point, however, is on the Glass Floor watching the absurd lengths people will go to avoid stepping on it.

Is the CityPass worth it for Torontonians? On the sheer economic aspect of savings: yes. Yet many of these attractions already have great membership and special rates that are probably more suitable for the person who lives here. On the cultural level, many of these attractions will be tired yet true; however, squishing them within nine days is a bit of a chore. How much mileage one gets out of each attraction really depends on the person. This said, the CityPass would make a great gift for the visiting relative you want to keep busy and out of your hair.

John's suggestion to the CityPass people, which I choose to ignore, is to replace the AGO with Leaf tickets. Perhaps we could invent the ultimate Torontonian dream pass to take us to the places we have always wanted to visit but didn't have access to; the TTC's Lower Bay Station for instance. If we compile a wish list here, maybe some savvy businessman will make it so.