CityPass Toronto Part Four: The AGO

I had just taken the above picture and was about to go for a second when a security guard interrupted me, "I'm sorry, Ma'am. You can't take any pictures".

Bewildered, I exclaimed, "I can't take a picture of a didactic? Really? What is the reasoning behind..."

Sensing I wanted to pursue a theoretical discussion behind the machinations of the AGO's draconian policies, the guard made certain I understood the law of the land before briskly making his getaway.

And that was the highlight of our visit to the AGO on day four of our CityPass touristy tour. 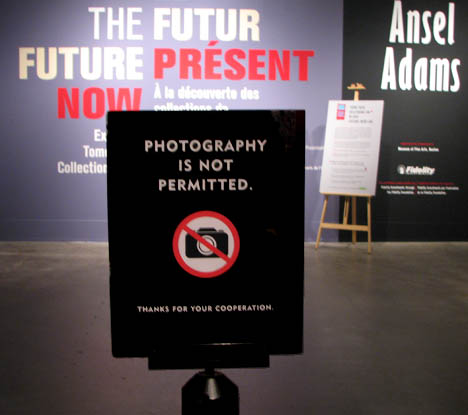 I would like to tell you more, but there's just not much else to tell. Of all the attractions in Toronto, the AGO is the least accommodating to the general public at large in the best of times. During this current stage of renovations, it takes two hours at most, even at a leisurely pace, for visitors to blow through the museum's spare highlights of the best of its collections consolidated in the Future Now exhibit, the Henry Moore Sculpture Centre, and Swing Space: Wallworks, not including the extra-ticketed current special exhibition, Two Photographers; Two Visions: Ansel Adams/ Alfred Eisenstaedt.

With the exception of the In Your Face installation, the AGO's attempts to be interactive are lame at best. However, considering that In Your Face depends on the collective contributions of the public at large, the AGO asks a lot from its visitors while giving them little back in return. General admission without the CityPass is currently $5 for adults, $4 for students, and $3 for youths.

Next week I will continue with CityPass Toronto Part Five.