Rapido, according to rumours I'd heard, has homemade olives.

The newish cafĂŠ at Bathurst and Dupont is so close to my house that I would have given it a try even without the olive rumour, but those Mediterranean treats offered extra incentive to get over there for a coffee and a bit of lunch. A bit of lunch! It's almost funny now to remember those modest intentions, because we ended up stuffing ourselves with pizza and sandwiches from Rapido's lunch offerings two days in a row. This is the kind of behaviour that gets one addicted in a hurry. 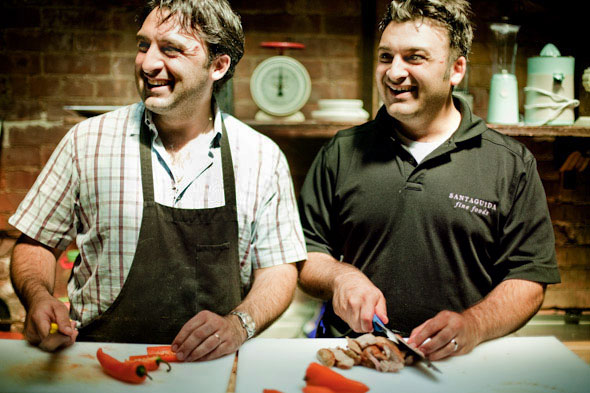 Marco and Carlos Santaguida have been in the food business for almost twelve years with their catering company, Santaguida Fine Foods . It's located just down the street from Rapido, which opened in April. These two are a delightful pair and they sure do love food. Most of their ingredients are local and their herbs are grown on site. Pots of basil and cilantro line the window seat where Carlos is sitting when Alyssa and I arrive. He is drinking an espresso and chatting with a customer. Natural light pours into the cafe's moody dark interior of exposed brick and dark hardwood. The prep area is open concept and directly under an old, rusty skylight through which the sun shines directly onto Marco and Carlos' mother, Vittoria, who is preparing pizza dough. It's quite the divine sight.

Plus, the family set-up makes me feel like I'm at a relative's (really gorgeous) house for lunch. The noon time rush has just ended, so the pickings are slightly less than usual, but beautiful nonetheless. An assortment of colourful salads line the top shelf of the fridge and bowls of fruit crowd the cash register along with brightly frosted cupcakes. Freshly baked pizza is nearly sold out and fine looking panini are displayed on two or three varieties of bread like baguette, focacia and whole wheat. 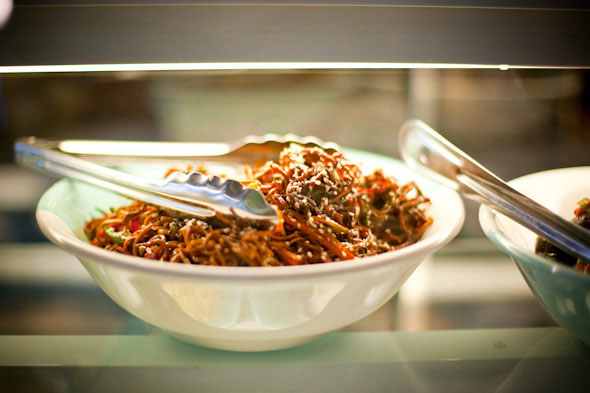 The "box" special is one sandwich and one of those brightly coloured salads for an all around good price (two specials came to $16). Between the two of us we have a tuna sandwich, a grilled vegetable sandwich, couscous salad and Asian noodle salad. Plus, I get a diet coke (truly, a strange habit that I'm developing) and Alyssa has homemade lemonade that comes out of a huge glass jar with lemons in it ($1.55).

There are not too many seating options but we manage to score a spot by the window, which looks directly out onto Bathurst. Mere feet from us, people are getting on and off the bus and glancing in our direction at the sandwiches. I imagine they're jealous of us because a) we're sitting in a cafĂŠ eating and drinking and they're not and b) our sandwiches look really good. 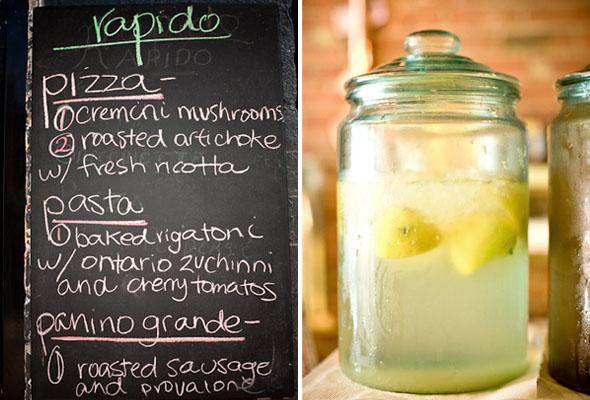 They taste good too! Seriously, these are the kind of sandwiches that you want to be vocal about. The bread is so fresh and soft, makes you want to say, "This is so good" with every bite. The grilled vegetable sandwich has layers of red pepper, eggplant and zucchini with a "special" mayo that gives it bite. I must admit, I was initially quite worried about the lack of cheese on there but that mayo really does the trick.

The Asian noodle salad is fresh and crunchy, carbo spicy. The homemade lemonade is subtle, barely sweet and fully refreshing. It is at this point that Alyssa realizes her camera battery is busted. We have shots of the food but none of the restaurant. "Let's just come back in the morning," she says, unfazed. What a fantastic excuse. I finish the rest of my delicious sandwich with the comforting thought of another one tomorrow. On the way out I grab a homemade iced tea, steeped for three days and lightly sweetened. It also comes out of a jar. 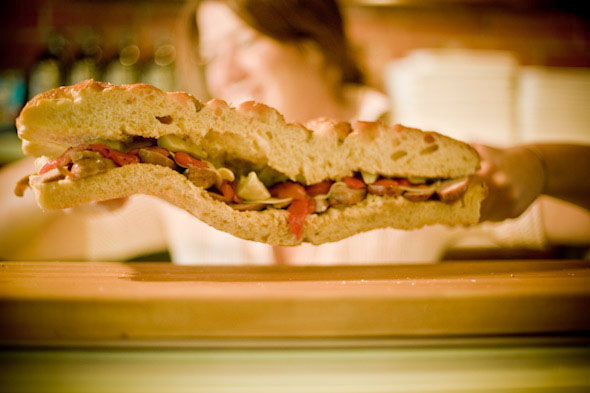 Alyssa's busted battery turns out to be the best thing that could have happened to us. Upon our return the next day, we're greeted like regulars. Now I really feel like I'm at a relative's house for lunch. There are several new items in the fridge including a panino grande: a gigantic sandwich of sausage, artichoke and provolone cheese. We take one piece of the grande and a slice of artichoke and ricotta pizza ($3.50) and gorge ourselves for the second time in twenty-four hours. The bread is (again) beyond outstanding. Focaccia is always tasty but often I find it tough. This focaccia is heaven: gentle and crispy and olive oily. Plus, that special mayo makes another welcome appearance. The pizza is crispy and thin with melted hunks of ricotta. 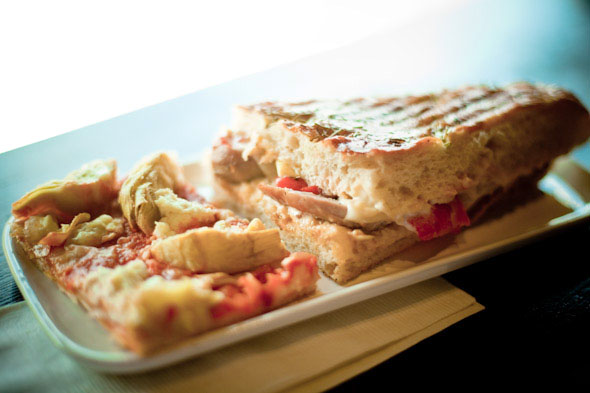 While Alyssa snaps shot of the interior, Carlos tells me about his plans for a hot table in September, and frozen take away lasagnas. He also tells me something very special about the meat, something I wish I knew earlier: the roast beef, roasted turkey and corned beef are all made in house. "Look at the roast beef," he says to me, pointing out a meaty sandwich with caramelized red onions. "It's done just beyond rare." The roast beef has a pinkish hue. How could I have possibly avoided it two days? Between the meat and frozen lasagnas I've found a few reasons to return a few more times, make a habit of this place with the outstanding panini.

And for the record, those olive rumours are true. 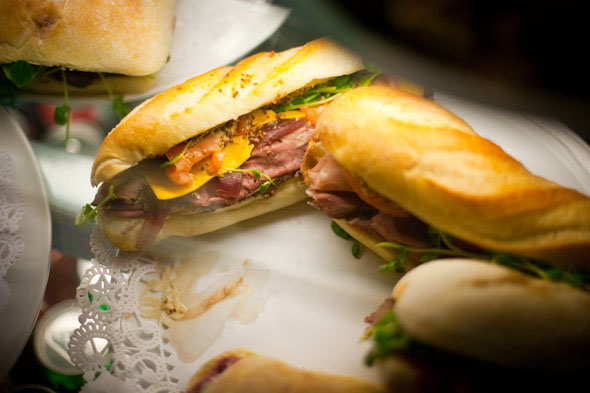 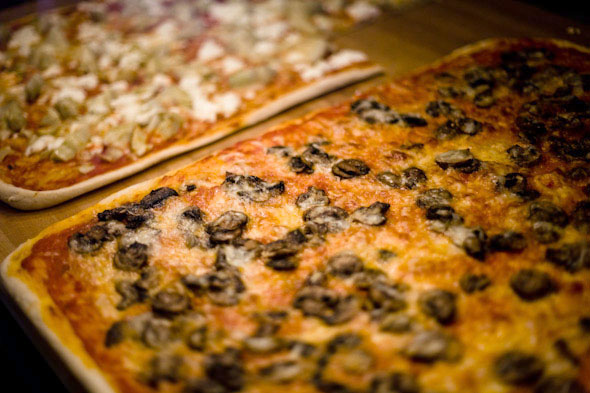 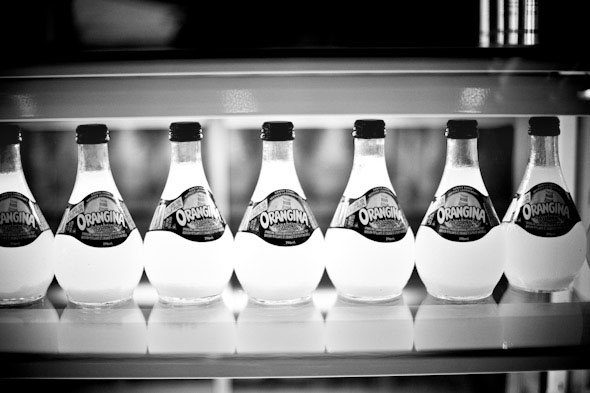 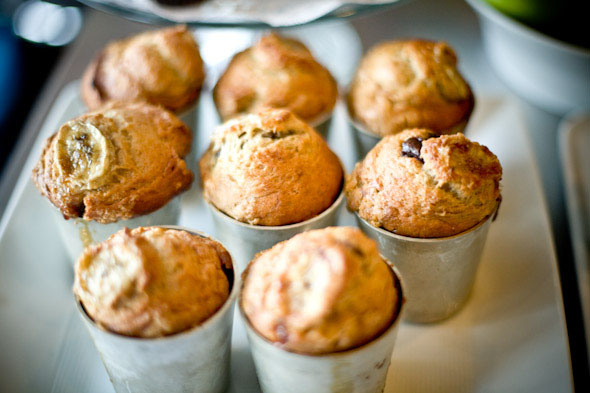 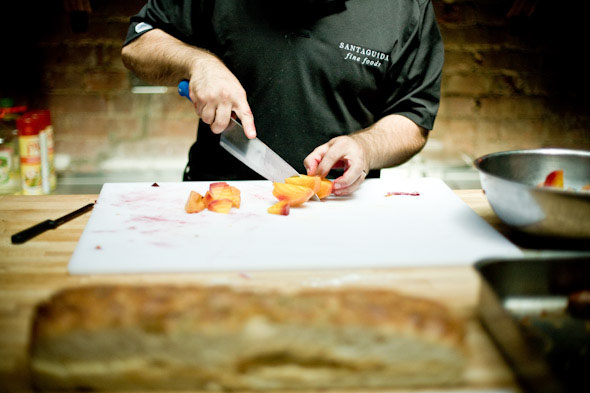 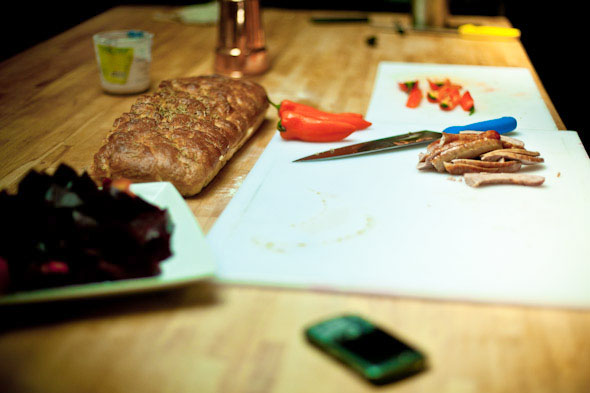 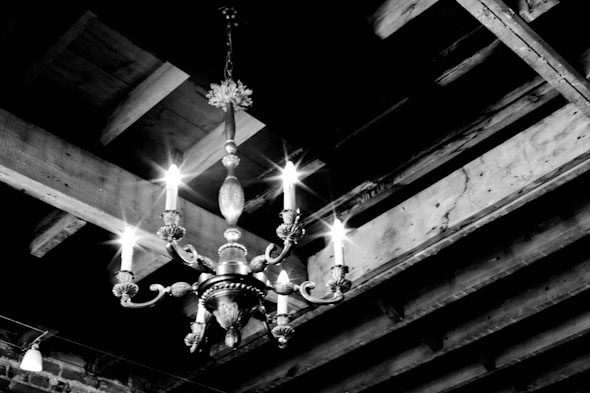