"I thought I was finished when I realized I had forgotten the skeleton guy. The composition was cramped on the left of the page, so I just drew another piece of floaty rock, and I thought 'oh he looks kind of lonely back there,' so I put some mantas flying around him. And I was like 'oh he's kind of separate from the group now. He kind of looks evil. He's a bad guy. Oooh, he's the bad guy! Nice.'"

Ramon Perez is explaining his creative process to me over coffee at Cafe Diplomatico. When we met, Sunday of last week, he was coming off two all-nighters at his College Street studio, a Friday morning class he teaches at Max the Mutt Animation School, and, I think, a wedding. He talks fast.

Ramon, in my opinion, is one of those young artists who has cut his chops and, in ten years, will be the artist that younger self-starters, like his current self, hope to share a table with at conventions. He is the local writer-illustrator behind Kukuburi, a web comic that invokes some of the unearthly weirdness of a J. Gourmelin sketch, but with flying whales. We chatted about his career and his ample portfolio, which includes work for Lucasfilm, an as yet un-nameable Dark Horse Comics project, and a solo noir graphic novel set in fifties Toronto. 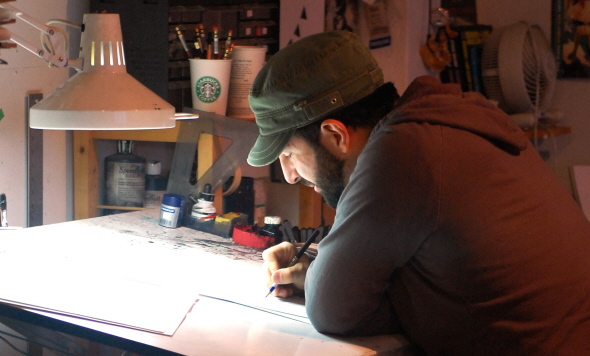 Ramon's earliest professional work was sci-fi and fantasy, black and white illustration done for Kevin Siembieda's Palladium Books, and their game-designing ilk. "He would give me free reign on a lot of stuff," Ramon says. "For some of their books when a script wasn't ready Kevin would call me up and go, 'alright, we need six magic user kind of characters, five robots, go nuts, and we'll just write them around what you design." The work that he rolled out for role-playing books was gritty and monochrome - it's hard to see the connection to the more peppy, colour-happy artwork he's producing these days for the Star Wars franchise or for his own projects. "I love black and white," he said, "but these days colour is more prevalent, so you adapt."

Kukuburi follows big-city delivery girl Nadia as she steps through a white picket gate into somewhere else. Each panel contains a little miracle of dreamscape weirdness that has kept me enthralled for the better part of a year. Ramon's notable characters include a chameleon with a stuffy British accent, a floating cycloptopus with a pipe and a penchant pour le francais (Ramon says he didn't realize the character was French until he started writing the dialogue), and a sinister skeleton channeling the spirit and glasses of Spider Jerusalem. It's published in two-page sets every Tuesday, except when it's not, as part of the Transmission X network.

One of Ramon's projects is an under-the-radar graphic novel for Dark Horse Comics, which he's not technically allowed to talk about. Here's what I got out of him anyway: clocking in at 200 pages, the unnamed book is a true-crime narrative about a serial killer possibly from Seattle (too much coffee?). Ramon is working with a writer, definitely from Seattle, and the deadline is some time in fall 2009. At which point he changed topics.

Instead we talked about the solo project he's been brewing for three years, a noir graphic novel set in historical Toronto. When Transmission X was being bounced around as an idea, this was the story he wanted to tell but ultimately decided it was too complicated for web format and Kukuburi took its place. The novel, which he aims to start writing in 2009 with the help of an arts grant, will take Torontonians back to an era when the infamous Boyd gang was so popular with city dwellers they could rob banks with impunity. Until, that is, one of their members plugged a copper, and they got caged in the Don jail, escaping only twice. "They hid inside the windows," Ramon says, "they had double windows in the old Don. And they'd climb into the windows and saw the bars at night. And then climb out and back into their beds for day." The story he envisions will include characters from his own mind and from history. "Not like the grander history," he says, "but the people history which I find more interesting. I actually like bringing Toronto into my stories once in a while. I don't think Canadians tend to promote their cities a lot, or for that matter their history."

You can check out Ramon Perez's work online at www.kukuburi.com, www.butternutsquash.net, and his personal art blog, www.cranialpercolations.com.