I found out about Jeff Cottrill's Guilt Pasta while exploring Toronto's Word On The Street, at the Burning Effigy Press booth. The title intrigued me (I like pasta and I'm familiar with guilt) so I bought it.

Turns out that Jeff is a Toronto-based satirist, fiction writer, and spoken-word performer who has toured with the Perpetual Motion Roadshow, and performed throughout Canada, the U.S., and the U.K. He's also the Managing Editor of DivorceMagazine.com, and his arts reviews, interviews and articles have appeared in publications like NOW, Vu, Exclaim!, The Village Post, and The Independent Weekly.

Guilt Pasta is his third chapbook of fiction and satirical monologues. Some are brief slice-of-life snippets, like his interactions with a clueless co-worker ("The Fiver"). Some of the characters in Jeff's stories may not be the sort of people I'd want to hang out with personally, but I found them intriguing ("To Kill A Mouse"), funny ("Sally Dumps Johnny"), and poignant ("Winners' Whistles").

My favourite piece was "Beautiful Swan," which is a re-telling (sort of) of The Ugly Duckling story. The first time I read through it, I found it hilarious. The second time, heartbreakingly sad. And that's part of what I found so compelling about many of the pieces in Guilt Pasta, that the each story or anecdote can hit you differently, depending on your own mood and experiences.

So what inspired you to write Guilt Pasta? 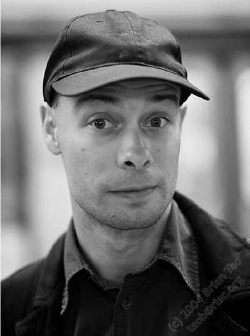 "Guilt Pasta" is a collection of stories and comic monologues, mostly from the past few years. Some of them were inspired by people or situations in real life that, while they became funny later on in retrospect, made me upset or uncomfortable at the time. Sometimes I like to ridicule people who come off to me as arrogant or mean or ignorant, but other times I'll just come up with an absurd situation or personality that strikes me as funny. Ideas come from a lot of different places.

How much of Guilt Pasta is based on your own experience?

A good amount. The co-worker in the "Fiver" stories is actually based on a manager at a horrible drug store in Brampton where I worked ten years ago. As he was my boss, I couldn't talk back to him the way the narrator does.

I wrote "To Kill a Mouse" while living in a boarding house in the west end that had a mouse problem -- it was a way of dealing with my squeamishness when live mice were caught in the traps. And "Winners' Whistles" (which I first wrote in 1995) was partly inspired by news about the Paul Bernardo trials but also on my own guilt regarding a parakeet I had (and didn't pay enough attention to) when I was a kid.

Have any of them read your book and recognized themselves?

Not in the case of Guilt Pasta, but then I'm not sure that the people whom certain characters are based on would ever actually read a book. I've had a few cases in the past where a friend or acquaintance asked me if a character in a story or monologue was based on them. Usually it wasn't the case, because many characters are combinations of several different people (or different character types). I do have one performance piece that blatantly ridicules several well-known Canadian slam poets, including Shane Koyczan and Amanda Hiebert, but that was just meant in fun. They were good sports about it.

Have you ever used any of these stories in your spoken word performances?

Yes. "Sally Dumps Johnny" is a sort of sequel to an older performance piece of mine called "Sally Dumps Jimmy" (you can hear it on my Coffeehouse or MySpace page). I sometimes wear a blond wig when I perform the Sally bits. There's a third one called "Brad Dumps Sally" which I haven't published or memorized yet. "How I Freaked Out the Spiderman Guy" is one I read frequently in my features, and others I do on open mics are "Roger Ebert's Near-Death Experience", the "Fiver"s and the Hemingway parody. I used to read "Beautiful Swan" a lot too, but people found it depressing rather than funny.

(Note from Debbie: You can see a video of Jeff Cottrill performing in the open mic at Dalhousie University during the 2007 Canadian Festival of Spoken Word, courtesy Sameer Vasta. ) 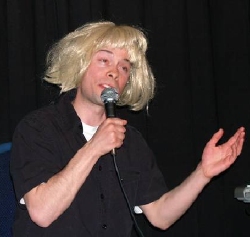 How did you get involved with Burning Effigy Press?

Through my friendship with Monica S. Kuebler, whom I met through the Toronto spoken-word scene in 2001. I was interested in publishing my own work but also liked editing other people's, so I began helping her a lot with proofing and editorial work, as well as promoting the press. We also co-hosted a monthly literary series, Strange Tongues, for two years. Now I'm the press's literary editor, and recently edited Adebe D.A.'s first poetry chapbook, "Sea Change". (Adebe is Toronto's Junior Poet Laureate.)

You seem to have so many interests and talents. Do you consider yourself mainly a writer? A spoken-word performer? Editor?

I like to think of myself as a writer first, but I've been so involved in the performance side of it for so long that it's really taken over. I wanted to be an actor when I was a teenager, but for some strange reason I was really good at math, so my mother discouraged me from acting and forced me to go to business school. After I flunked out of there (half on purpose), I focused on writing and dreamed of becoming a novelist. But all my creative-writing teachers in university told me I would never have what it takes to be a "real" writer (generally because I wasn't a minimalist), so I dropped out of that program too.

Eventually I discovered the local spoken-word scene, and crafted my own performance style by combining my interests in both acting and writing. So far, that seems to have worked out better.

What's the The Perpetual Motion Roadshow?

The Roadshow was an indie-artist touring circuit (created by Toronto novelist Jim Munroe) which ran monthly and went to many U.S. and Canadian cities, including New York, Chicago, L.A, San Francisco, Vancouver and Toronto. It was usually three different writers or performers who rented a car together to do seven shows in seven cities over eight days, usually in small bookstores or art galleries.

I was the coordinator of the tours for the last fifteen months or so (the final one was in March 2007). Stressful work, but very satisfying when the tours worked out well.

My *day job* is with a website and magazine called Divorce Magazine, which offers self-help articles for divorcing people and also promotes divorce professionals (lawyers, therapists etc.). Officially I'm the Managing Editor, but I actually wear a lot of different hats: I write and edit web/mag content, write advertorials, optimize the site, look for new ways to give the website exposure, and so on. (I have never been married or divorced.) In the evenings I go out to a lot of poetry and spoken-word events, often open stages. Or I stay at home and write. Or I relax and read or watch a movie while feeling guilty that I'm not writing. 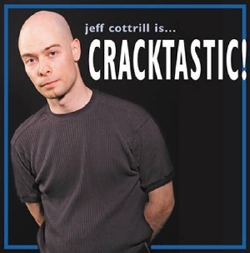 So what's your Cracktastic CD about?

Cracktastic! is a collection of performance pieces and monologues written between 2001 and 2003, all very comical or satirical in some way. I take the piss out of macho jocks, manipulative girlfriends and pompous literary elitists. Generally I either portray the characters directly, or describe them in the third person with heavily ironic praise. (I often tell people to skip tracks 1, 3, 5 and 9 -- the "macho jock" tracks -- if they're easily offended or don't understand irony.)

What are your next writing projects? Any novels in the works?

I've been having false starts on novels for years. I get blocked very easily with longer fiction, largely due to negative past experiences with writing workshops. This past summer, though, I wrote a good chunk of a first draft for a potential novella. There are many things I like about it, but it still needs a ton of work. Unfortunately, due to my day job and other commitments in the arts scene, it's difficult to find the time for the amount of writing and revising that a novel requires.

In the meantime, I'm always writing new spoken-word bits and testing them on open mics. I've recently begun contributing film reviews to NOW magazine as well. I am thinking of recording another CD next year, with more recently written material, and planning to go on tour in the U.K. again probably next spring.

Unless the library counts, I don't really have one.

Sometimes I'll browse titles at Indigo or Pages or any random small bookstore I pass. But I tend to reserve and borrow from the library when I want something new to read, and I only buy a book if I know I'll want to read it over and over. I guess I'm cheap that way.

The Willow (on the Danforth, east of Broadview). The Pollo Rellenos is so, so, so good that I have never gotten around to trying any other main dish at that place. Perhaps one day. The daiquiris aren't bad, too, and the staff is really friendly.

You can find out more about Jeff at his Coffeehouse or MySpace page. Jeff's next performance gig is next Friday (Nov. 9) at the Great Hall -- a fundraiser for the Toronto Cat Rescue.

Photo Credits:
"Eh?" is by Brian Tao, courtesy Jeff Cottrill.
"Sally" pic from TorontoPoetrySlam.com.
Cracktastic! cover is designed by Cynthia Gould (based on a photo by Brian Tao).