When I first walked into the Roncesvalles specialty shop called "Conspiracy Culture" I was half expecting to be dealt a hefty dose of (pardon my frankness) lunacy. But the friendly, shiny, happy store owners, Kadina and Patrick, weren't wearing tinfoil hats, and didn't yank on my coat and try to convince me that Soylent Green is people. Instead, they continued about their business as I browsed the many shelves, pointing to various books I'd already read and films I'd already seen. Right then and there, they witnessed a new first. Much to their bewilderment, a closet conspiracy theorist was coming out - in the store.

We got into talking. "Chemtrails? Total bull. UFOs? If by UFO you mean unidentified flying objects, then yeah. But aliens? I'm not so sure. Did flight 77 crash into the Pentagon? Maybe, but why are they withholding video footage?"

Whatever your conspiracy fancy may be (whether it be an interest in politics, secret societies, mind control, genetically modified foods, Atlantis & Atlantean technology, remote viewing, indigo children, Gnostic texts, the paranormal, etc), Conspiracy Culture is the place to find relevant books and DVDs, and if you're lucky, like-minded people to talk to.

The shop is comfortable. The sofas are inviting, and an internet terminal that shoppers can use could come in very handy (although it wasn't functioning at the time I was there because it, and another computer in the shop, had at the same time mysteriously succumbed to viruses).

Conspiracy Culture seems to satisfy a niche market, and they do it really well. Eager customers have made the journey into Roncesvalles from all around the GTA, including places as far as Barrie, Stouffville, Owen Sound, Brampton, Mississauga, Ajax, and Markham, and Patrick and Kadina have even had people call in orders from as far away as Calgary and Montreal. They've also gotten some deserved media buzz (The Toronto Star, NOW Magazine, and CBC radio have all noticed the store).

If you think you might have a conspiracy theorist streak in you, I recommend popping into the shop. But be prepared to stay a while - there's plenty of fun browsing that can be done there!

On Monday February 19th at 7:00 PM, Conspiracy Culture is hosting a gathering (limited to 30 people - so RSVP is required) to discuss the topic of 'Re-Education Beyond Formal Education'. The discussion will focus on how formal education is a contrived and controlled process of 'dumbing down' the youth with the intent to breed subservience to the 'system.' 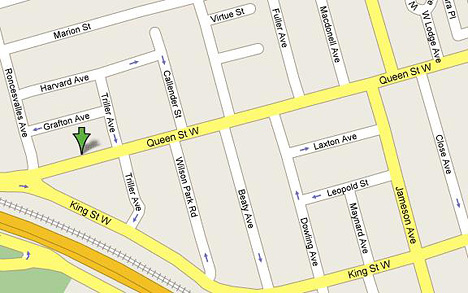