Although it makes sense that there's more public art in Toronto's downtown, the true extent of the concentration comes as a bit of a surprise.

A look through nearly 400 art installations throughout the city, including any city-owned pieces and art from Public Art & Monuments Collection and the Percent for Public Art Program, reveals that a whopping 38 per cent of them are found in just one ward, Spadina-Fort York.

While there are 149 pieces in this area, 15 wards have public art counts in the single digits or lower, three Scarborough wards have just one piece each, and areas like Etobicoke North, Humber River-Black Creek and Davenport have no art listed at all.

President Emerita of OCAD University Sara Diamond has led the charge on tackling this unequal art distribution, taking part in a research project with others from OCAD and the University of Toronto, Redefining Public Art in Toronto, back in 2017.

"We developed this notion of public art deserts because so much of the public art strategy was dependant on dollars from the developers and development in the downtown core," she told blogTO.

"Public art should be part of the fabric of the entire city, to make them livable and make us want to be in the public realm." 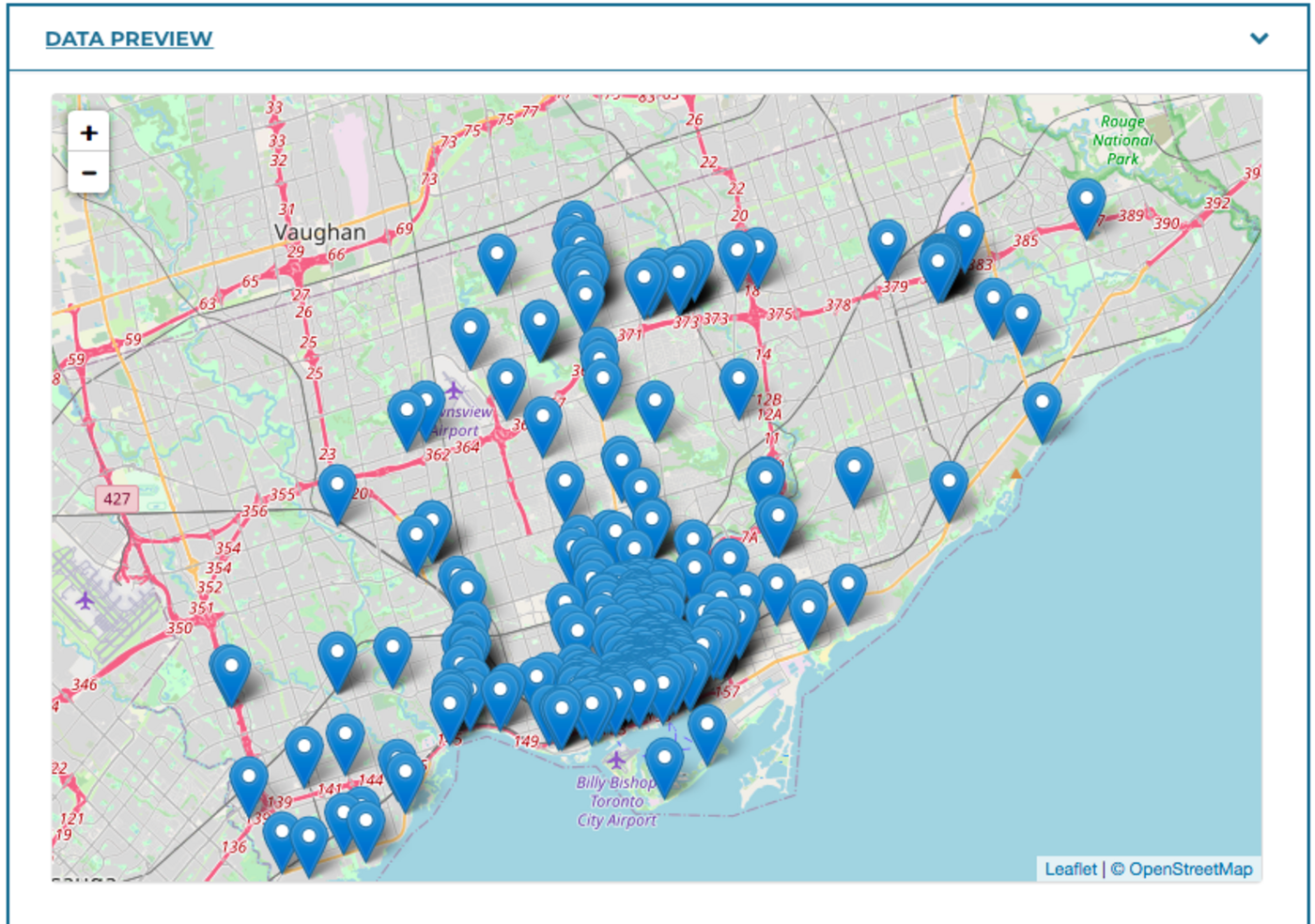 A map of where public art is found around the city. Photo courtesy of the City of Toronto.

Like many other cities, most of Toronto's art is funded by the Percent for Public Art policy drawn from Section 37 of the province's Planning Act, which as the City of Toronto writes, "authorizes municipalities to grant increases in height and density of development, in exchange for the provision of facilities, services or matters."

Basically, condo developers can do things like construct taller buildings if they promise to pay for publicly beneficial things such as artwork.

Although this has led to some really cool art over the years, Daniel Silver, associate professor of Sociology at U of T and a contributor to the research project, says there are a few issues with how it works in Toronto.

One is that the art installations that come from these projects mostly remain on-site.

"The effect is that public art follows development," Silver told blogTO, "and it's obvious where public development has been the last 20 years, which is why so much of it ends up in just a few wards or postal codes."

Other flaws in the program are that a percentage is not actually mandated and if it's given, it still might go toward other neighbourhood amenities; public art is one of several things that qualify as community benefits, alongside things like parks and community centres. According to Silver, "This puts public art into competition with other really good things."

"It's a recommendation but it's not mandated, which means it doesn't happen as often as it should," he tells blogTO.

With Section 37 on its way out the door, the City of Toronto has come out with a new public art strategy that's partly been inspired by Diamond, Silver and their research team's efforts.

While it's still too soon to tell what the new funding approach will look like exactly, the latest strategy focuses on the type of artwork that will be created, moving away from the standard permanent monuments and statues and diversifying the types of artists for these artworks.

"It's on the right track," Diamond says. "The question now is, what are the instruments? What are the tools that are going to be created to make sure that there's still an opportunity for developers to invest in public art?"

Both Diamond and Silver are hoping for clearer mandated rules for private developers, as well as public projects and more feasibility to put funds toward larger, joint art projects.

"The city could make it easier for funds from multiple projects and sources to be combined, aggregated and used not necessarily on a specific development site," Silver says. "It could also develop clearer mandates about how much money private developments must set aside for public art."

"The number one thing is for the city to mandate that a percentage of the cost of its own capital projects be set aside for public art. This was recommended by city council in 2003 but never implemented."