You can now buy toilet paper with Doug Ford on it

Looking for something unique to gift your favourite Doug Ford superfan (or super-hater, perhaps) this holiday season?

A roll of toilet paper featuring hundreds of photos of the Premier's face may be just what you're looking for—if you're willing to spend $20 on a single roll of 2-ply.

The site notes that it will ship its products Canada-wide and that $2 of every purchase will go to St. Clares, a non-profit, Toronto-based affordable housing development organization.

It's "the most expensive TP you'll ever buy," says the product's website. "But thanks to Buck-A-Beer you've probably got lots of extra money." 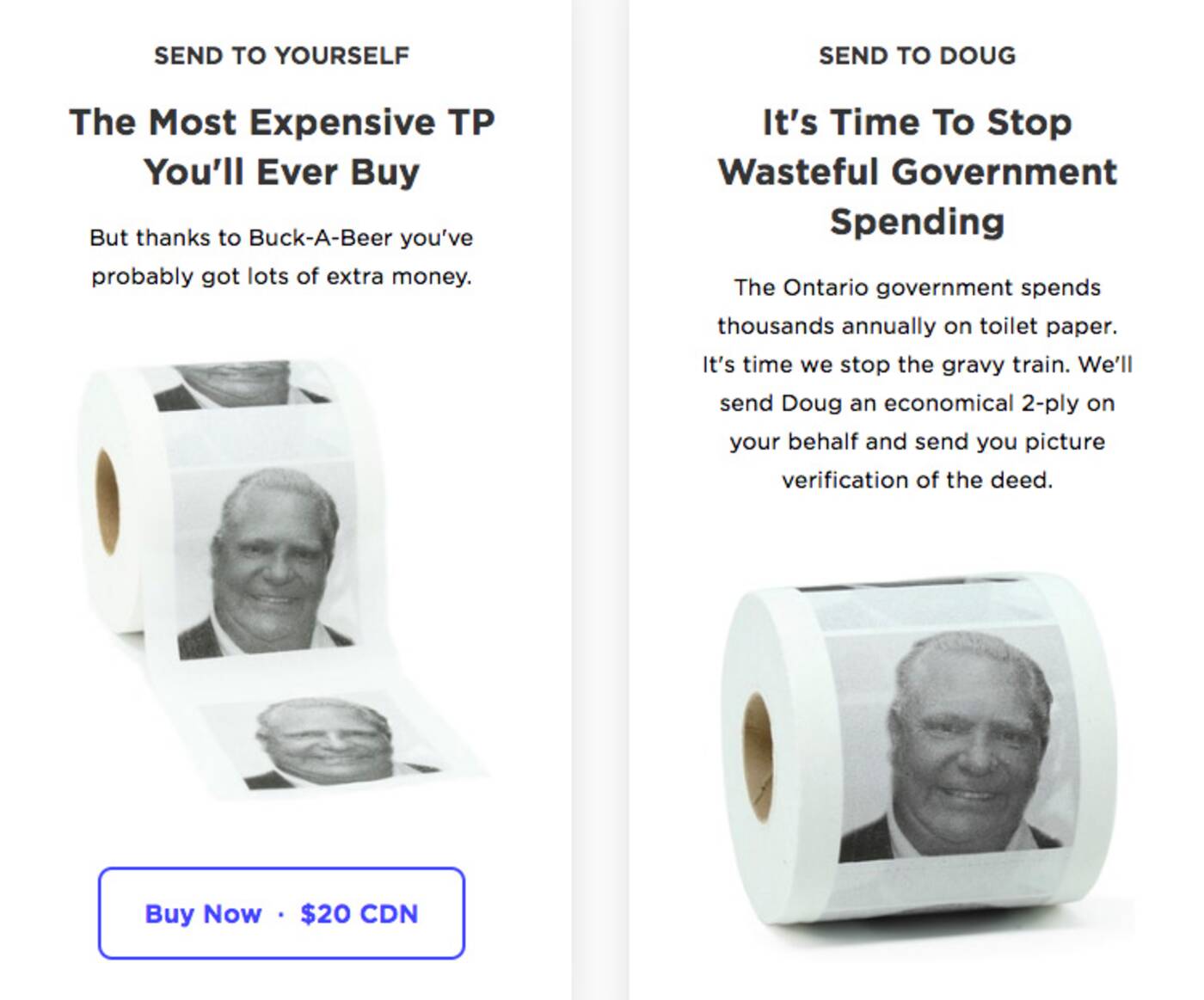 A Toronto-based artist is selling Doug Ford-themed toilet paper online. Rolls are $20 a pop plus tax. Image via itsgiftology.com.

Customers also have the option of sending some toilet paper to Ford himself in an effort to combat "wasteful government spending."

"The Ontario government spends thousands annually on toilet paper," reads the description of that product, which also retails for $20.

"It's time we stop the gravy train. We'll send Doug an economical 2-ply on your behalf and send you picture verification of the deed."

A promotional video called "Doug Ford - He's On a Roll" suggests that the message behind this project isn't necessarily one of support for Ford, whose PC party took office in June.

The 3D animated video shows the Premier's smiling face, as well as campaign signs from this year's provincial election, being pelted with cute poop emojis.

The emoji-like characters soon make way for what looks like actual poop dripping onto the politician's head. One final, giant poop emoji lands atop this pile of digital poop in digital DoFo's hair, pushing it over and onto his face.

If you can't tell by its disturbingly realistic quality, the video was made by a pro—in fact, the entire project comes to us from the artist behind Voidz Toronto, whose whimsical rendering of Hooker Harvey's went viral a few weeks ago.

The 30-year-old digital artist and documentary filmmaker has updated his Instagram bio to read "I'm in the toilet paper business," and tells his followers they can support his work by sending "a Christmas present to Dougie."