The unveiling of the Hearn Generating Station as a venue for last year's Luminato Festival was one of the highlights of Toronto's year in arts and culture. More than a few people wondered how such a novel but risky venue was ever approved in this red tape-friendly city.

Now, a year later, the Hearn is coming back in a major way. In the wake of glowing reviews, Luminato decided to expand beyond merely welcoming back the Unsound Music Festival. With the Hearn set to serve as the hub for the entire arts festival, a series of upgrades is planned for the moody industrial space. 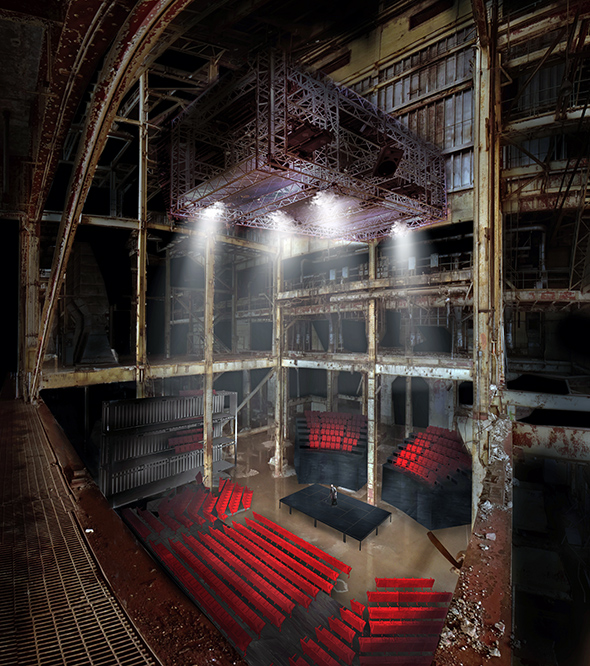 The most significant of these is surely the 1,200 seat Hearn Theatre, which will be built out of shipping containers at the east end of the building. To look at this space today, it's almost unfathomable that such a transformation will be complete in a month and a half, but the whole idea is to intervene as little as possible. 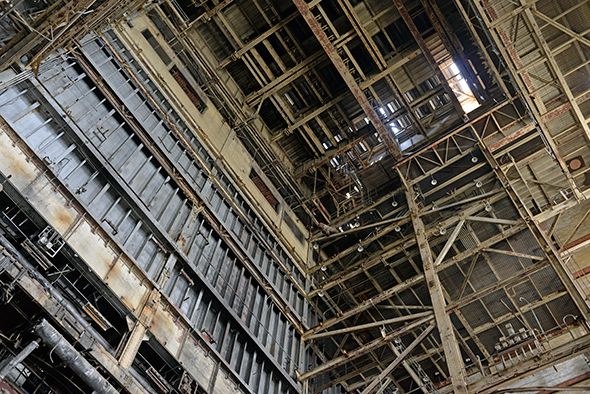 I can think of few materials more suitable to the space than shipping containers. The balcony seats will be some of the hottest tickets around come June. Kudos goes to Toronto-based architecture firm PARTISANS for a design that's both simple and exciting.

Toronto-based company Giant Container Services will handle the installation and conversion of the containers for use at the Hearn, which is a nice touch given the local connection but also the fact that the outfit is quickly making a name for itself as a leader in the modular re-purposing of these metal storage crates. 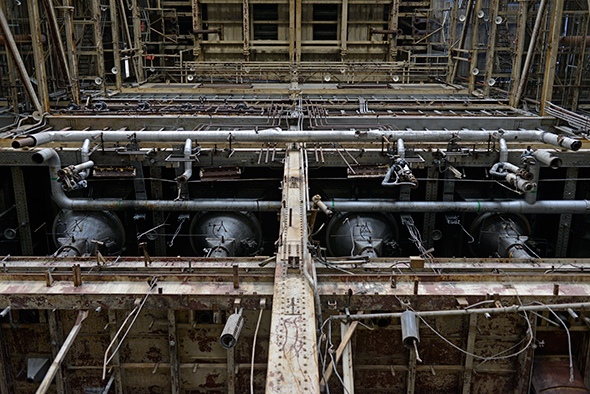 The music stage will also get an upgrade for this edition of Unsound. Given the soaring ceiling height in many areas of the massive 400,000 square foot space, shipping containers will also be used to enhance the lighting, sound, and scenery above the stage. It's worth mentioning is that acoustics consultancy Charcoalblue helped to plan both of these key spaces. 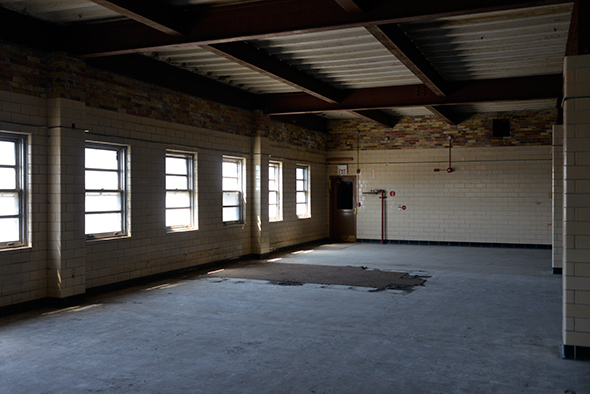 There will also be musical programming on the third floor at the western end of the building, which is in immaculate condition. More intimate performances from the TSO, Unsound participants, and Kid Koala will happen here. 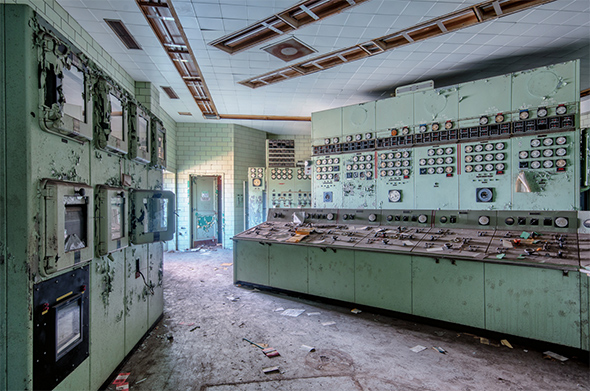 While the food trucks were a hit at Unsound last year, the plan is to knock it out of the park this year with a pop-up restaurant in the eerie but beautiful abandoned control room. Operated by Frederic Morin (Joe Beef, Le Vin Papillon) and John Bil (Honest Weight), it will go by the name of Le Pavillon, a reference to the pioneering French restaurant in 1940s New York.

Those looking for a less refined experience will be able to imbibe at the open-air Biergarten at the back of the Hearn. Beer will be handled by Mill Street, while a variety of sausages and grill-friendly eats will be offered by Parts & Labour. If it's chilly out, there will also be a communal dining area indoors known as the Canteen. 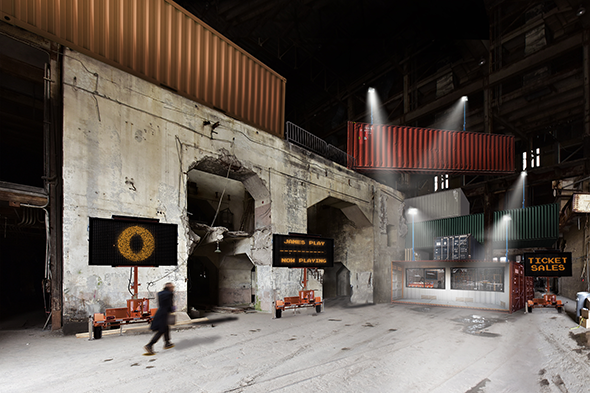 The expansion of this year's programming at the Hearn has also led to a serious rethinking of logistics and transportation. The main entrance will now be at the back of the building, bike parking has been highlighted as a major priority, and special shuttle buses will run 12 hours a day from Union Station (as well as the Westin Harbour Castle and the Commissioners TTC loop. 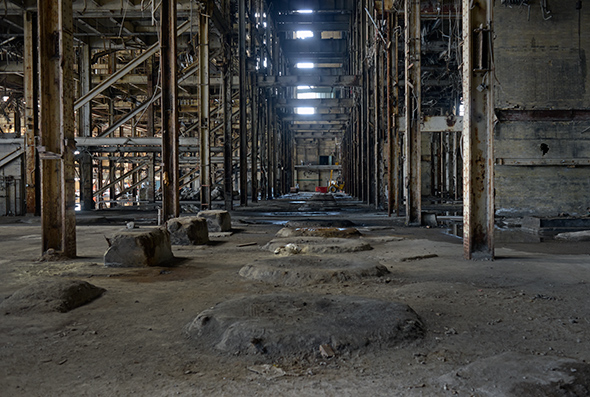 There's a laundry list of other additions and improvements in store for this year, which will showcase the building during daylight hours for the first time in its new life as an arts hub. To listen to Luminato Festival Director Jorn Weisbrodt speak of the interplay between the programming and the space is to witness someone with a bold vision and the stubbornness to pull it off. 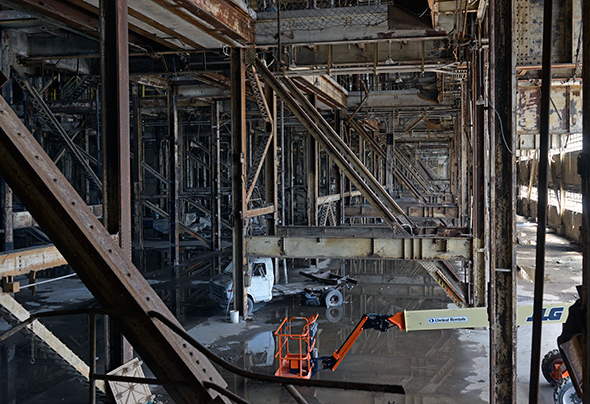 "The Hearn is not just about Luminato - it's about Toronto's cultural future," he says of the unique venue. He's right, course. Assuming all goes according to plan, the scale of this year's programming at the Hearn might very well serve as a breakthrough for Toronto's arts and cultural scene.

We'll have more on Luminato's programming as the festival nears. For more information on shows, tickets, and this year's festival in general, visit the official website.

Renderings via Luminato, control photo by ~EvidencE~, other photos by the author.