The top public art in Toronto is both highly visible and easy to miss all at once. We've got multitudinous Douglas Coupland pieces, from his red canoe sculpture at Fort York & Bathurst to the model home clocktower at the Shops at Don Mills; Henry Moore's famous Archer has boldly sat at Nathan Phillips Square for decades; Anish Kapoor's stone mountains in the courtyard of the CBC building have become a part of the institution's Toronto identity.

The list of installations is long and impressive, but we probably take them for granted at list a little while stuck in our everyday routine. But what constitutes good public art? Are the best pieces the ones that integrate so well with their environment that you barely notice them? Or are they contestable works that function by attracting attention to a particular part of the space in which they reside? Does public art have to be entirely given over to the public, or can it be housed private places with public access?

The following list includes pieces that fall into one or more of the above categories, but whose primary criteria for being "best" is in their contribution to the mythology of urbanity and humanity in Canada's biggest city. Here are the top 10 public art installations in Toronto.

Richard Serra, Tilted Spheres at Pearson International Airport, Terminal 1
What's better when hurrying with your carry-on to catch a flight than taking in a bit of public sculpture? Um, admittedly, Toronto Pearson Airport's Terminal 1 is one of the more stressful environments in the city, but Serra's enormous, steel installation (which was constructed before the new terminal in order to adequately facilitate it) may be viewed as a respite when dealing with the inevitable emotional trappings associated with plane travel. 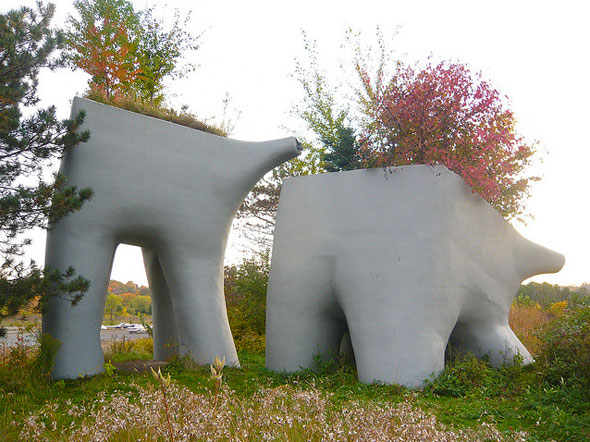 Noel Harding, Elevated Wetlands at Don Valley Parkway, Taylor Creek
As a millennial who (mostly) grew up in the city's east end, my interactions with Canadian artist Noel Harding's strange cement sculptures, Elevated Wetlands, have always involved magnetism. As children, whenever we drove by them on the DVP, my brother and I would have our faces pressed up against the closed car window, hounding my parents with questions about what "those things" were. Now, realizing the piece is a sustainable eco art project (drawing water from the Don River into the vitrines and back down again) the importance of this Harding work feels more magnetic than ever. 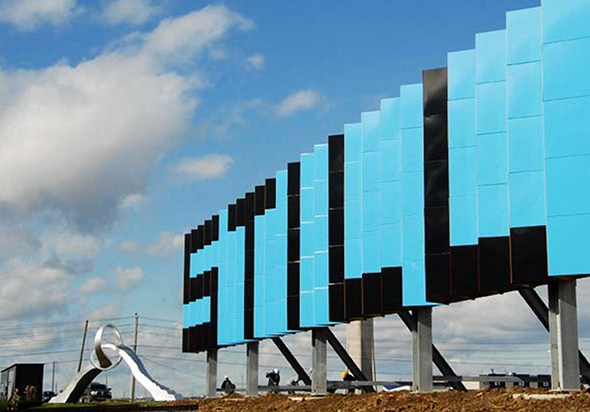 Carl Skelton, Still Life at Highway 401 between Renforth & Dixie
Whether viewed daily by the 400,000 Hwy 401 commuters or simply driven by once-a-year, Skelton's Still Life, a large, optical piece whose emblazoned words are the same as its title, is one of the city's best for examining the constant, kinetic motion of the city dweller. Adequate viewing of Still Life requires you be in a car. It functions like one of those giant billboards on the Gardiner, the image spelling out "STILL" as you approach and transforming into an image spelling "LIFE" as you pass and look back at it. 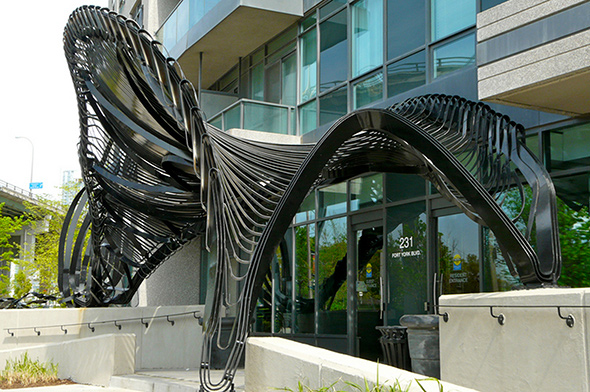 Vito Acconci, Fence on the loose at Azure at WaterParkCity
Have you heard? Toronto's got a thing for condo development. While many will argue that the excess at which these developments are proliferating has a detrimental effect on the city's visual culture, condo construction also helps to put Toronto on the map as an international public art destination, with developers commissioning major artists across the city. Vito Acconci's work at the WaterParkCity at Fort York & Fleet Street includes hundreds of black steel bands that seem in motion, cascading down the building and into its courtyard environment, touching on the heavy nature of construction and giving life to the building. 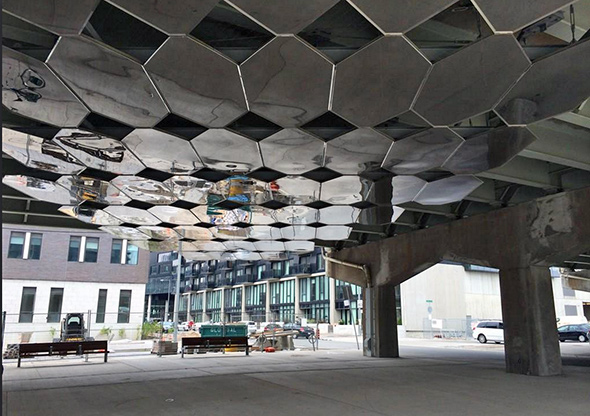 Paul Raff Studio, Mirage at Underpass Park (2012)
Constructed in the new public space that has been called Underpass Park, beneath the Eastern Avenue ramps is a newish piece by Toronto-based architecture/design firm Paul Raff Studio. The polished stainless steel work, which includes 57 panels installed directly on the bottom of the ramp, draws viewers in by clumsily but mystically refracting light and optically adding space to a formerly uninhabited area of the city, a place that is surrounded by concrete.

James Turrell, Straight Flush at Bay-Adelaide Centre (2009)
It's a little ironic that a piece by American artist James Turrell, whose work so often deals with light and nature and transcendentalism--not to mention escaping from urbanity--would be housed in the super corporate "centre of business" that is the stark Bay/Adelaide Centre. Housing primarily finance and law firms, the building is one of the busiest in the financial district. Still, in five drywall panel reliefs on a 188 minute loop, this mesmerizing Turrell offers up solace with its dancing pastel light gradients, absolutely wooing even the least adept art viewer... Plus, rich guys like art too, right? 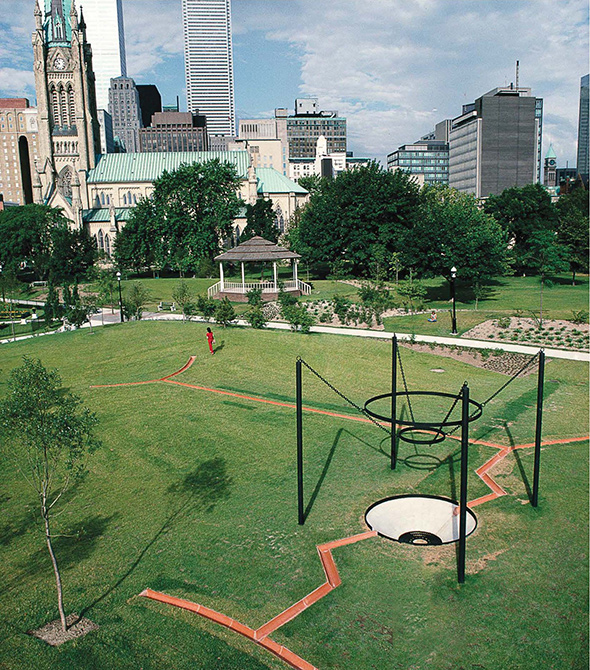 Nancy Holt, Catch Basin at St. James Park (1982)
Famed American outdoor installation artist Nancy Holt, a figure often unknown to the art world because her work could never be housed in a gallery, used her art to promote the feeling of sublime closeness to nature and geography, in a similar vein as her husband Robert Smithson (to whom she was married for 10 years before his untimely death in 1973). Her piece at St. James Park, a basin that captures water which then recedes into a sewer below, is a small-scale version of one of her epic bio works, bringing natural dynamism to a park whose history is immeasurably rich. 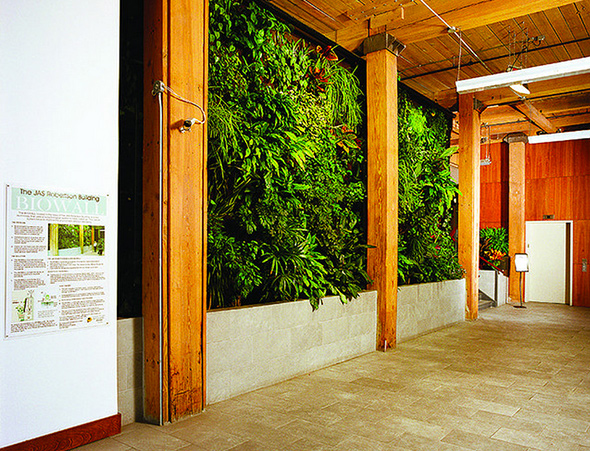 Air Quality Solutions Ltd., The Robertson Biowall at The Robertson Building, 215 Spadina (2004)
After converting parts of 401 Richmond into art dwellings, developer Margie Ziedler bought the Robertson Building at 215 Spadina and made it a hub for agencies promoting social change. In tandem with its mandate, the lobby of the Robertson Building (which is attached to the Dark Horse Coffee on Spadina Ave.) is one of the more hopeful examples of eco intervention in the city, with an 24 square metre wall covered completely with plant life. What seems like a simple decorative wall is actually an elaborate soil-less, sustainable irrigation system, part of an effort by Ziedler to adapt the building to include more green space. 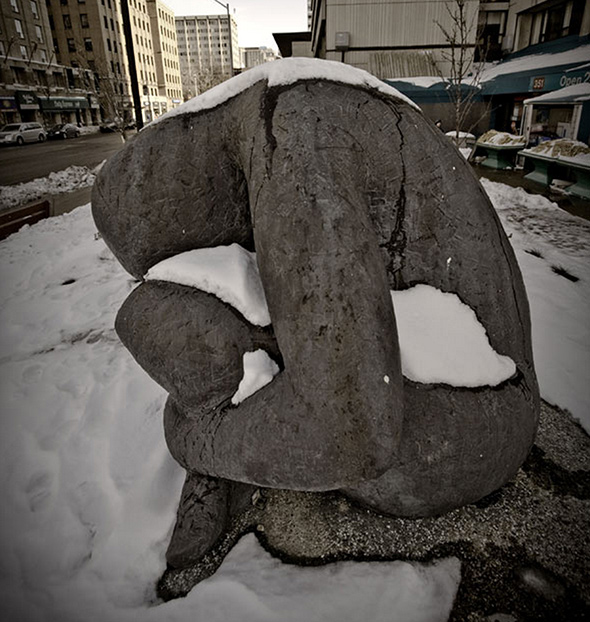 Heinzerling/Apt, Unknown Student at 341 Bloor St W.
Nestled in front of the Rabba Fine Foods near the U of T campus at the corner of Bloor & Huron is Unknown Student, a blink-and-you'll-miss-it sculpture that is sometimes affectionately referred to as "the crying hippie." Part of Rochdale College, which opened in 1968 as an experimental, art school/co-operative living space, the sculpture remains a reminder of the thriving bohemian scene that Toronto once facilitated and its important position as an alternative art centre. 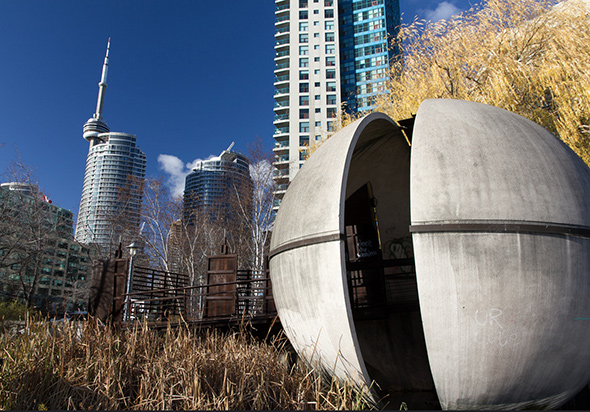 John Fung and Paul Figueiredo, Sundial Folly at Harbour Square Park (1995)
A piece often overlooked because of its proximity to construction and condo life, Fung and Figueiredo's Sundial Folly is a lakefront structure that actually functions as a sundial, a minimalist spherical structure with a slit facing towards the water that, once inside, is a good place for quiet, in a part of the city teeming with tourists. The work comes from a contest commissioned by the city, where the newly graduated artists won out against 144 other entrants. Next time you need to meet a friend at the waterfront, meet them inside this wonderful monument.