This is what a lesbian haunted house looks like

A lesbian haunted house has crept up at College and Lansdowne just as Halloween approaches. Killjoy's Kastle has all the basics — gravestones, monsters, frightening moans — but this is anything but a typical Halloween romp. This is a Lesbian Feminist Haunted House, and it's making waves across Toronto and beyond as rumours and photos of Allyson Mitchell's ambitious interactive art installation accrue. 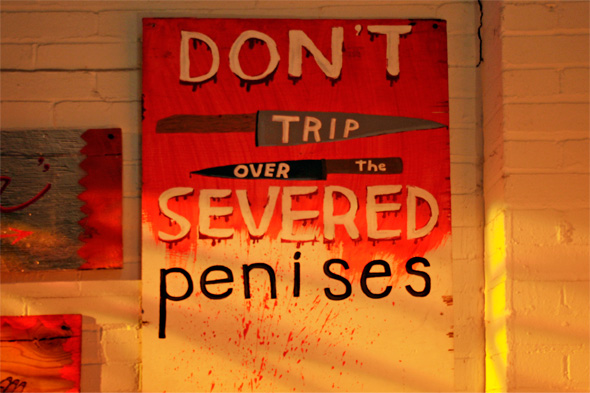 Killjoy's Kastle's entrance gapes in the alley behind 303 Lansdowne, through the giant teeth of a dentata rainbow. Signs in the waiting room (you'll wait to hook up with your women's studies tour guide) offer warnings which are meant to be more playful and biting than actually scary such as "2 adult womyn in love," "don't slip on the pussy juice," "don't trip over the severed penises," "beware the sinking pit of identity politics," (okay, that last one is scary.) If the severed penises sign is upsetting, there's a decompression room at the end of the journey (and this post) where you can talk about it. Tombstones for bygone feminist organizations are stacked one on one. 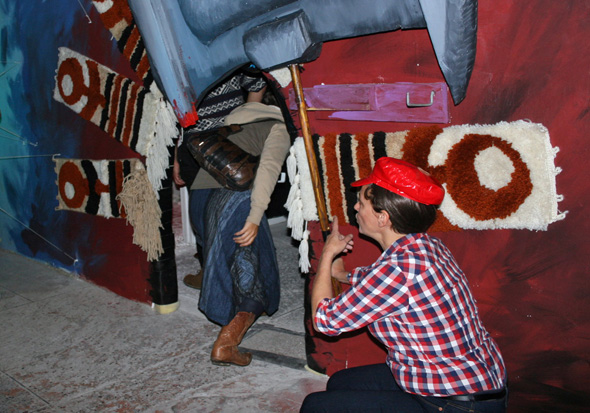 The guided journey through the dark installation rooms is thrilling on a different level than a regular haunted house, but there are a few genuine scares. Rug-hooked, crocheted, and paper mache ghouls loom and cry out. What goes into making such a huge exhibit? "We've been in the space for a couple of months," Mitchell tells me, "but working on the props, costume and script with a big crew of artists for months and months. Almost everything is hand made — every cobweb is crocheted, each tombstone is hand carved from styrofoam." 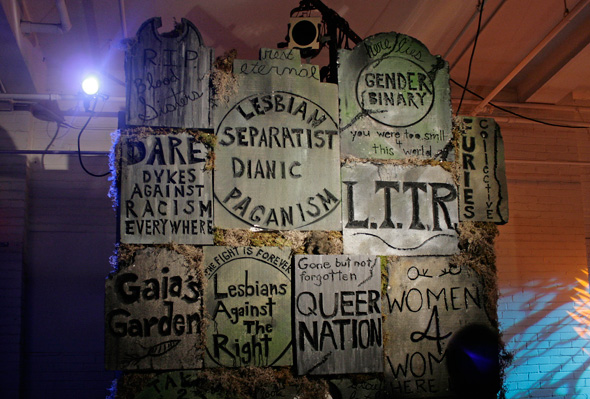 I asked Mitchell for three ghosts who might haunt Killjoy's Kastle. "Jane Rule, The Combahee River Collective, and Will Munro." She answered. I won't give too many details about the house away, but I'll state the obvious: nods and references to key issues and personalities abound, and while there is a lot of wit here, there is also a lot of history and a lot of pain. 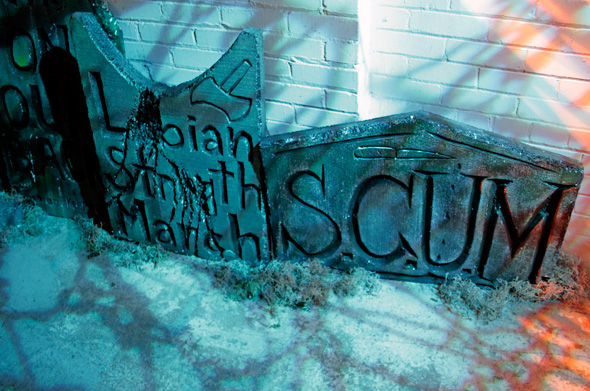 So I asked Mitchell what makes a good killjoy. "Someone who questions even when it hurts," she explained. "I make work that centres around queerness and bodies, and felt that an exploration of the fears and horrors of lesbian feminism would be a good source for a haunted house." Mitchell is influenced by American evangelical "Hell houses" which often include abortion installations meant to terrifying young women and strove to create a satirical piece which combined "theatre, humor, and community engagement." 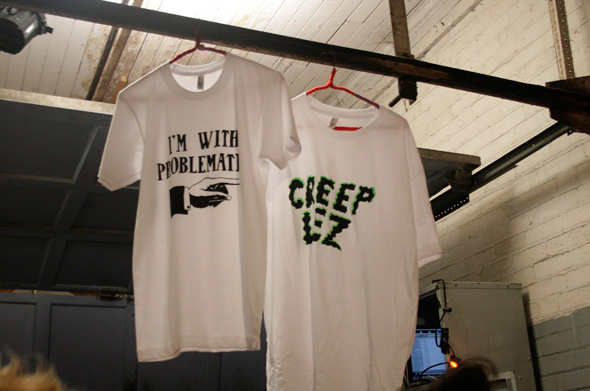 Community engagement is turning out to be key. While some of the 750+ visitors had only positive feedback to voice in the decompression room, others have found the space raises problems. Criticisms of Killjoy's Kastle have been voiced online about how inclusive or even relevant the installation is to Toronto's diverse queer population. Rather than bucking critiques, Mitchell has addressed concerns in a frank and open post on the exhibit's Facebook event page, which has turned into a participatory discussion on activism, language, radicalism, and inclusiveness — a.k.a. the themes of the show. The post can be read in full here. 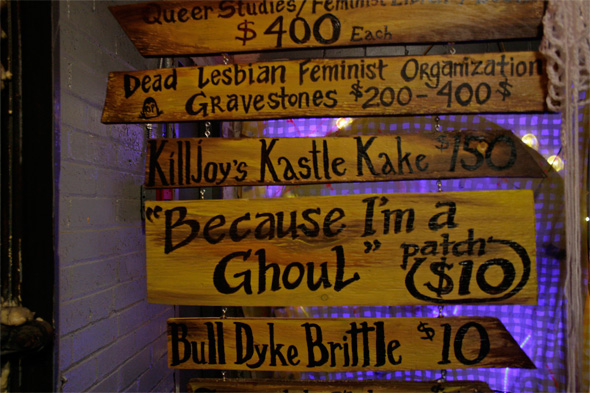 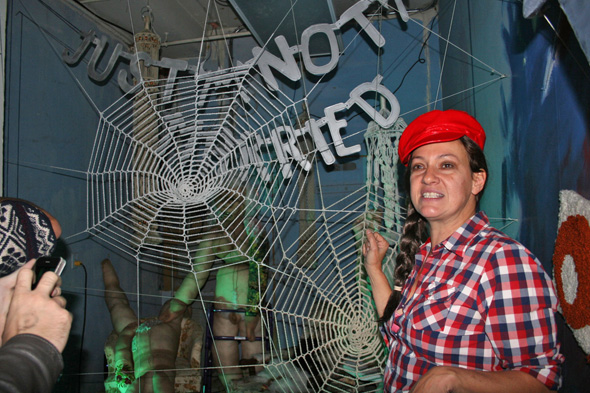 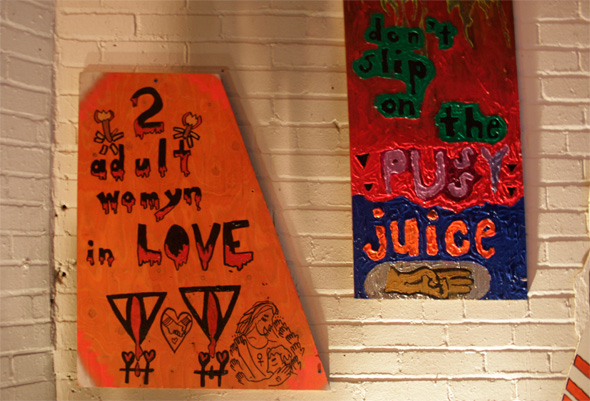 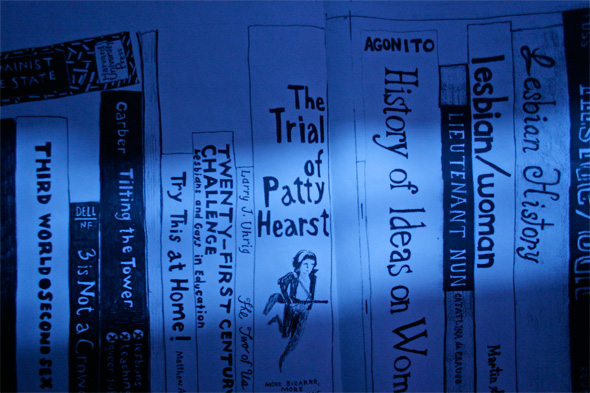 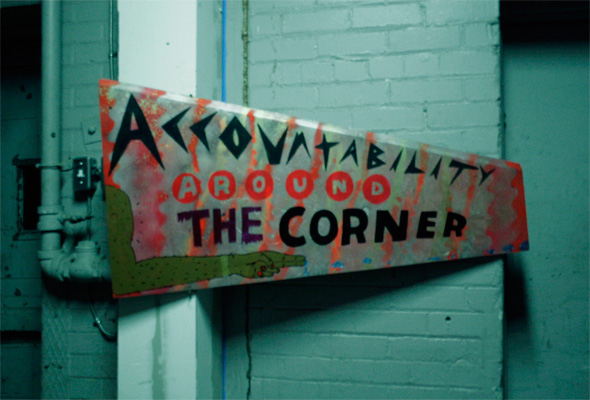 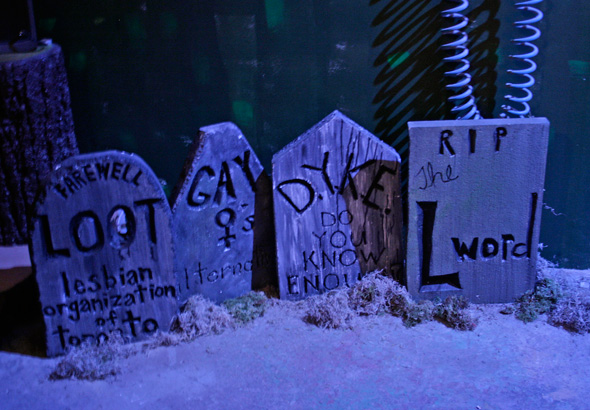