True Stories Told Live is like The Moth for Toronto

On Wednesday night, The Common on College Street West transformed from a bustling one-room coffee house into an intimate theatre where stories were told to a room full of welcoming strangers.

The room was packed and by 7:30 p.m. people were sitting on the floor, while latecomers gathered at the entrance. Yet, the room was still but for the sound of the passing College streetcars. And then the stories began. Equipped with one mic and an amp, storytellers stood up and revealed.

Amanda Wyman was first and told of her interaction with a lonely and senile neighbor at the old age home next door; a nine-month pregnant Bonnie Chan spoke about her unexpected one-year wedding anniversary party at a Great Gasby-like estate near Vancouver; and actor Kimberly Huie described the powerful role that fine foods played in the final road trip she took with her mother.

The audience laughed and cringed with singer-songwriter Lisa Bozikovic's tale of high school shaming and how music offered her a cherished escape. Lisa ended her story by picking up her guitar and singing This is How We Swim - her wistful and powerful voice attracting passersby on the sidewalk outside. The crowd exchanged wide-eyed looks at their luck at the unexpected concert.

Bonuses like that and moments of genuine intimacy can be expected at Toronto's True Stories Told Live (TSTL). It's a simple concept. A bunch of people have a drink in a small room in West Toronto, while listening to other people telling true stories. Like the popular podcast and New York-based non-profit organization The Moth, TSTL offers a stage to both the professional and amateur raconteur.

There are four rules: the story has to be true. It has to be about you. No notes. Not longer than 10 minutes. What makes it different than other storytelling groups? Music is allowed and stories can be enhanced with a song. It's free. And it's curated. While all are invited to participate, it's not an open mic and presenters are chosen well before.

Marsha Shandur, a recent British transplant and former radio presenter and music manager, was hooked after attending her first live storytelling performance in London, describing the experience as "profound and moving." Once in Toronto she discovered the already dynamic adult storytelling scene: 1001 Friday Nights of Storytelling, Raconteurs, Storytelling at Caplansky's, storytelling workshops with Sage Tyrtle, Tales of ... at the Rustic Owl, and undoubtedly more. 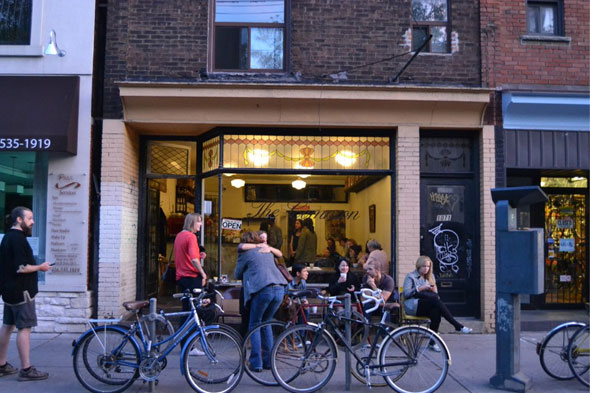 Marsha decided the market was far from saturated and took her storytelling friend Erin Rodgers' advice to "add to the cannon of huge storytelling groups in Toronto." The first Toronto TSTL was last February. Marsha chooses the line-up, organizes the events and works with the storyteller about a month before the performance. "People open their souls," says Marsha. "I think storytelling will change the world." Her October through April 2014 line-ups are pretty much booked. She's now booking for May.

If the overflow at Wednesday's evening is any indication, Marsha's assessment of the city's adult storytelling market is accurate. It's an intimate night out, that starts and ends relatively early. You can be in bed by 10 p.m. A welcoming and fulfilling social alternative to the bar scene, TSTL offers connections without great risk or required intoxication. Just show up, and listen. Or, maybe eventually, share.

One of the stronger performances of the night came from seasoned storyteller Zebulon Pike. He talked about his adolescence being divided between two distinct cultures - his father's Toronto and mother's native Faroe Island, a seemingly mystical place where one summer he got to second base.

True Stories Told Live 2013 season concludes October 30, not to resume until early 2014. Luckily for eavesdroppers and exhibitionists and everyone who falls in between, there are lots of other options.