The Doubletree Plaza shook as the Nagata Shachu taiko drummers beat out a furious song of old. Each thump of the drums was so strong, and the acoustics of the hall so sound, that I felt the air vibrate. Perhaps those were the goose-bumps running up my skin, though. I turned to the crowd. Gazing at the neon sea of brightly-coloured wigs and Styrofoam armature, I wondered who felt the same.

Such were the opening ceremonies for Anime North 2013. I attended all three days at Anime North so that I could answer some burning questions. Mainly, what can someone expect from a convention of this size? What sights are worth the price of admission, and how does one enjoy oneself at such a venue?

Read on for my impressions or check out our huge slideshow of photos. 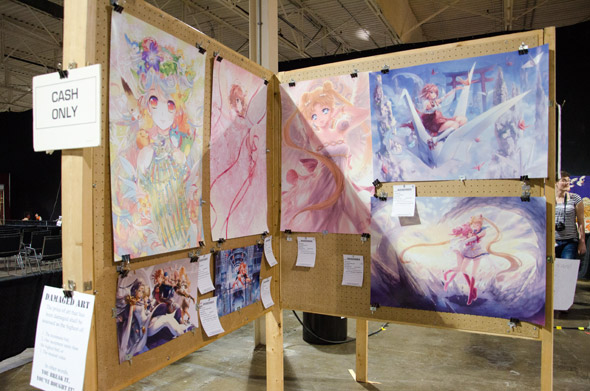 Located in the heart of the convention is the Comic Market, a hot-zone for artists and crafters to sell their works. Here can be found original pieces to own for oneself or hand off to a loved one, whether it`s a painting or a print or hand-made bowties and jewelry.

In the middle of it all was one of the big mainstays of Anime North: Gallery Momiji. For the past eleven years, the Gallery has hosted a variety of amateur and professional paintings, sketches, and sculptures. This year was no exception, as over six hundred pieces from fifty different artists were on display that weekend. Over the years, Momiji has come to include many types of art.

One Marie-JosĂŠe Cayer donated Japanese relics to be put on display, not sold. Such donations include stunning Meiji-era kimonos and tools dating back to the Edo period. While not for sale, they certainly attract attention. Plus, whatever money spent at Momiji goes towards Sick Kids Hospital.

"For me, though," Gallery Director David Federman said in a statement on Saturday, "the biggest joy has been being a great springboard for launching the careers of amateurs and professionals. It`s going to be very exciting to see all the new artists emerging from AN." 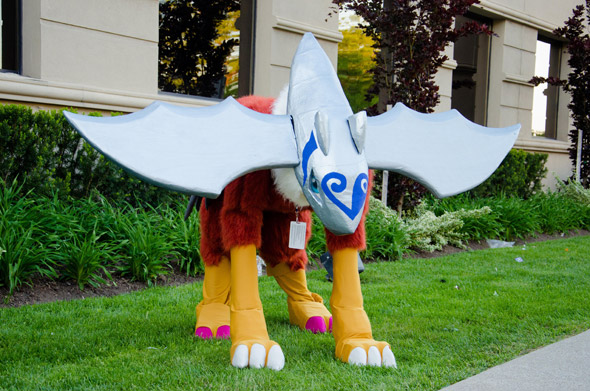 Panels are always an interesting experience, often covering a number of topics that excite attendees and encourage discussion. Many panels are mostly cosplay workshops for people who want to learn new tips and tricks on dying fabric or making weapons, or are roundtable discussions on various series.

I visited some that were quite different. One in particular was hosted by the Congress Centre's building supervisor Nick Charabaruk and the Master of Ceremonies, cultural anthropologist Doctor Shelley Rabinovitch, titled "Cosplay Is Not Consent." This was a formal, personal, and quite handy guide for con-goers who wanted to know about acceptable forms of physicality, how to stay safe and be discrete in complimenting a cosplayer, and what to do when dealing with potential stalkers.

Not that every panel had such a serious tone, mind. There were two panels on the difference between science fiction and science fact that were both hosted by very engaging and charismatic ex-soldiers and military historians called "Military Realism in Anime" and "Where's My Giant Robot?" One called "Anime and Parenting" discussed connecting with your geeky children and how to embrace their hobbies, while another, "Transphobia in Anime and Gaming," went into positive and negative portrayals of trans characters in Japanese pop culture. Basically, you'd be surprised at not only how much fun you can have at Anime North, but how much you can also learn from being there. 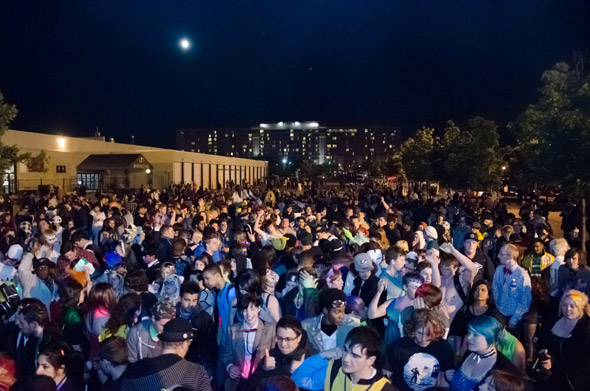 The Congress Centre's parking lot was converted into a stage area where DJs spun remixes of popular music, and hosted another set by Nagata Shachu. Several J-Pop and J-Rock acts also performed that weekend, including AWOI, Umbrella, and Chii Sakurabi, who were met with nothing short of boundless enthusiasm.

What else was there to watch, though? BLOODSPORTS. Well, not really. The weekend held several Cosplay Battle Chess events for people to sit in on. This is when cosplayers are arranged on a mock board and act out the moves of a chess game being played nearby, engaging in choreographed combat whenever the pieces collide. So it's less "Rook to Bishop 3" and more "Deadpool to Cutie Honey 3."

That same day was when the Anime Wrestling took place, when Great Canadian Wrestling's own roster dressed up before stepping into the ring. I ended up arriving during a six-man tag team match between Mario, Death Note's L, and Elmo, and their opponents Wario, The (evil?) Green Ranger, and Jason Voorhees. Someone's been reading my fanfiction. 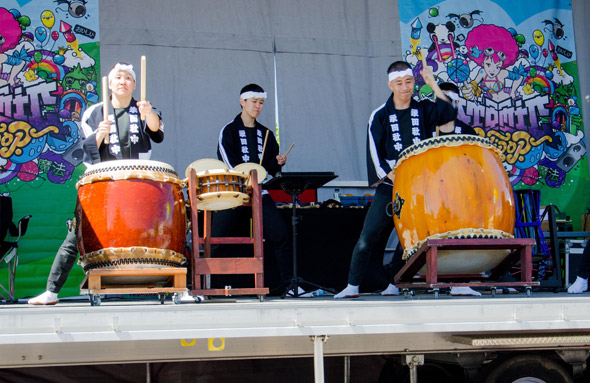 How to relax when you're already relaxing? Well, there were a couple of dances on the Friday and Saturday nights, and I just so happened to check out the J-Rave being held in the Congress Centre. It was fun but I'm certain I was the oldest guy there so I felt out of place. I did have a dance-off with someone dressed as the Grim Reaper from Soul Eater, though, so that made my night.

The nearby Sheraton Hotel hosted several retro arcades and game tournaments for anyone wanting to kick some butt in Darkstalkers or attempt a Super Mario speedrun. One of the most popular places there, however, was the Manga Library. Hosted by Emilie Uyeyama, the Library has been at Anime North for the past four years. Assembled from her personal collection of nearly six thousand volumes, this hideaway is an ideal spot for fans to get away from the insanity and read for hours on end, so long as they use their convention badge as a library card and stay inside the library space. 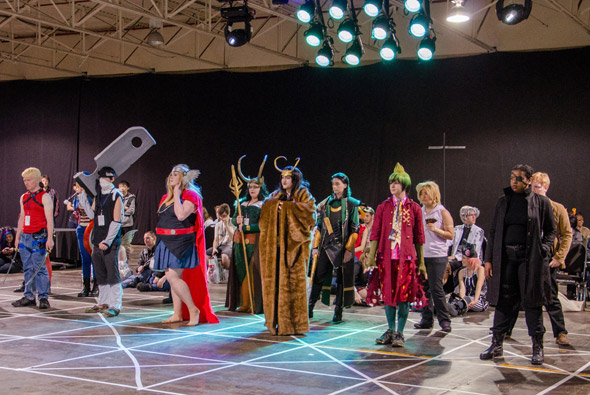 I had fun. Then again, I often do at conventions. For those in the community, it's a great place to catch up with old friends and learn new things about the fandom they enjoy. For people who are new to the convention game, it can be either overwhelming or a fun place to explore. If anything I said here tickles your fancy, line up next year and see for yourself what brings out and psyches up over twenty-thousand Torontonians every May.

Above photos by Tristan Gordon / Slideshow photos by Irina No