10 artists to watch from the Sheridan Illustration show

Last Thursday, 99 Sudbury hosted the graduation exhibit for the Sheridan College Illustration Program, and the massive event space was quickly packed with excited students, supportive family members and friends, and banquet servers relentlessly hawking trays of potato chips in what was perhaps the most bizarre choice of food I've seen at an grad show in the city. But other than this one small misstep, the exhibition offered up some real delights.

Sheridan offers the only dedicated Bachelor of Arts Illustration degree program in Canada, and its students leave the program with an incredibly well-rounded education. With mandatory classes exposing them to both traditional disciplines (such as painting and drawing) and digital technologies (like Web design and motion graphics). A 14-week work term is also offered, ensuring that students graduate with valuable real-world experience, as well as instruction on how to create a workplace-ready portfolio and website. This is definitely evident in the grad show, as savvy artists included cards, posters, and buttons to ensure their work stayed fresh in the minds of the attendees. 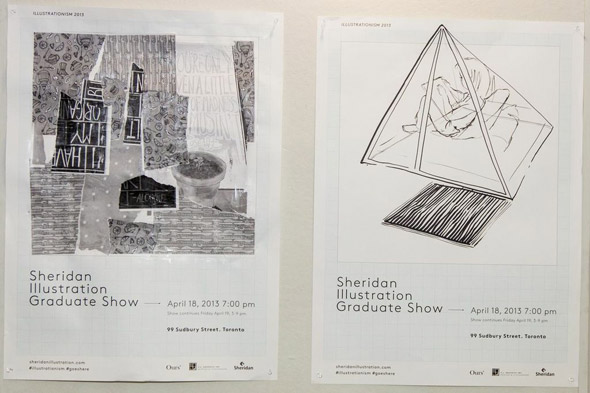 There was a ridiculous amount of great work on display, and I was hard-pressed to narrow my favourites down to just 10. Eventually, I decided on the artists that best represented the diversity of the student work. 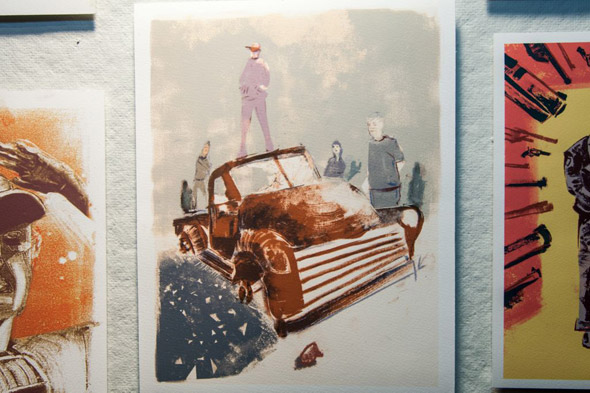 Steve Boyd
Oof. Steve Boyd's work hits right to the heart. In addition to a fantastic eye for colour and composition, Boyd knows how to tell a deeply affecting story with only the bare minimum of visual cues. It's a damned shame his website only offers what he displayed at the grad show, as I would love to see much more from him.

Cindy Esteves
Cindy Esteves' elegant pieces on wood panels were both eerie and feminine, combining women and animals into uncanny hybrid figures. The concept was an exciting one, and the deftness of her hand with the inks and oils was clearly evident. If Alphonse Mucha listened to Fleet Foxes, this would be the result. 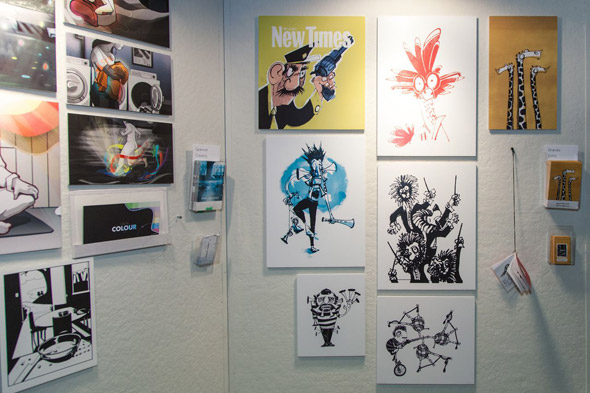 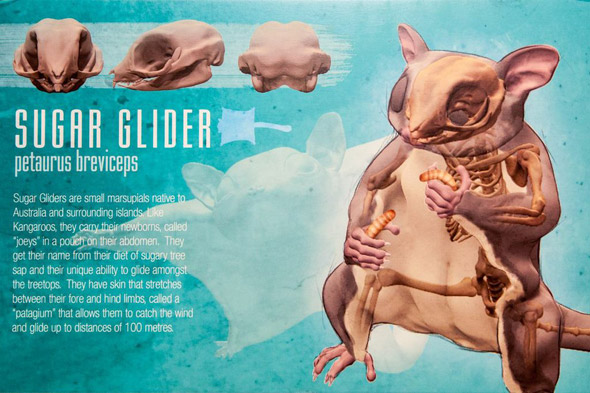 Alex Redford
Alex Redford's biological illustrations were definite standouts, adding a huge dose of experimentation and fun to a usually staid and straightforward genre. The amount of personality he can inject into the skeleton of a sugar glider is staggering. 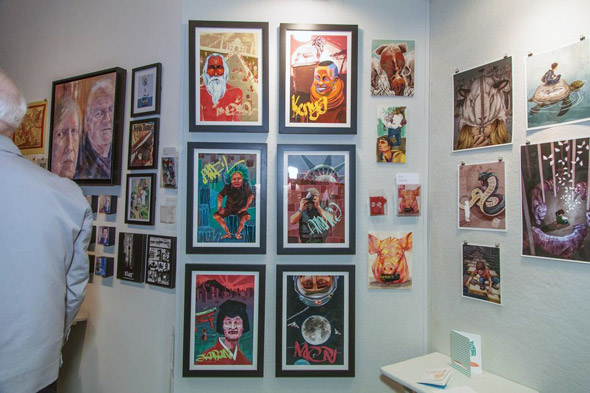 Eric Diotte
Eric Diotte's display was the first I encountered when I entered the show, and it stayed in my mind throughout. His flashy mock-advertisements for destinations like Kenya, Brazil, and America may have owed their inspiration to retro travel posters from the 1950's and 60's, but they presented the nations' traditional national iconography in an entirely new light. 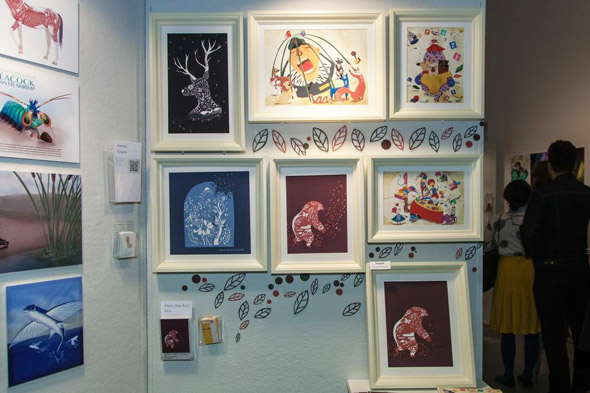 Mono (Soo Eun) Ahn
Though she previously designed backgrounds for Samurai Jack and the Power Puff Girls while living in Korea, Mono (Soo Eun) Ahn's work has moved in a dramatic new direction. Her intricate, folksy papercuts popped out in a sea of digital creations, and her decorative display was equally on-point. 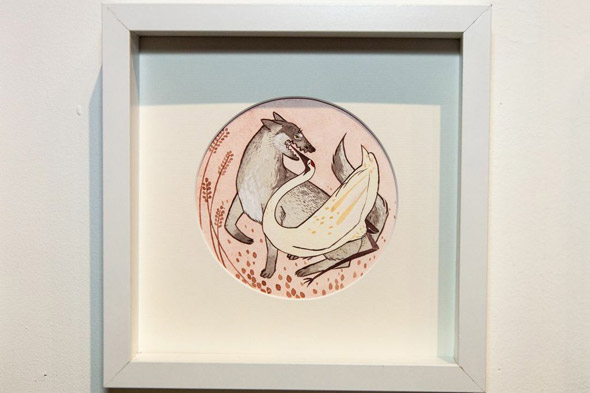 Kailey Lang
Seen only through small circles, Kailey Lang provided us with just a small glimpse into her fairy tale world. Both cute and compelling, Lang's station in one of the room's corner was a much-appreciated respite from the throngs of people (Seriously, what was with the servers relentlessly pushing the potato chips?) 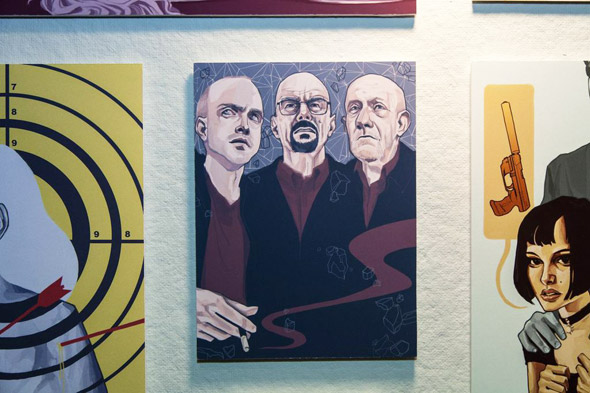 Ashley Floreal
Ashley Floreal's colourful take on pop-culture references certainly drew a crowd, but it was her inventive technique that kept them looking. Sexy and slick, I could easily imagine them accompanying a review in the Walrus or the New York Times. 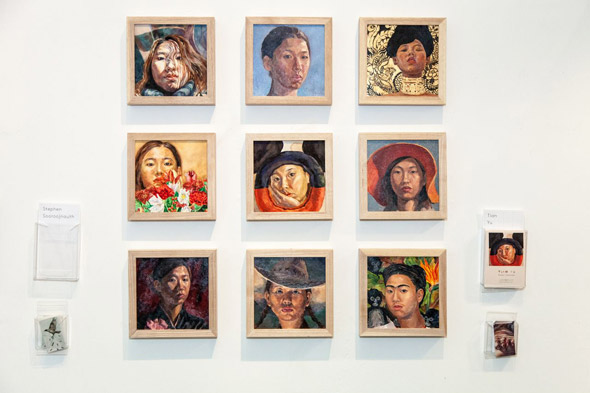 Tian Yu
As her recent award from Applied Arts Magazine confirms, Tian Yu has some serious painting chops. Her realist portraits capture light and shadow beautifully, and the way they alternately riff on motifs from art history and Chinese culture is tremendously compelling.