Walking into the clearing across from the abandoned WWII munitions factory at 163 Sterling Road on Saturday afternoon, it was a surprise that the Toronto police hadn't been called. A crowd of 40 stood in a semi-circle around a broken down red Pontiac as the beginnings of a faux riot commenced. Most of the audience was armed with heavy-duty cameras, but some were people who simply came to see what SMASHING, the performance art piece involving a live, hour-long car destruction, was all about. 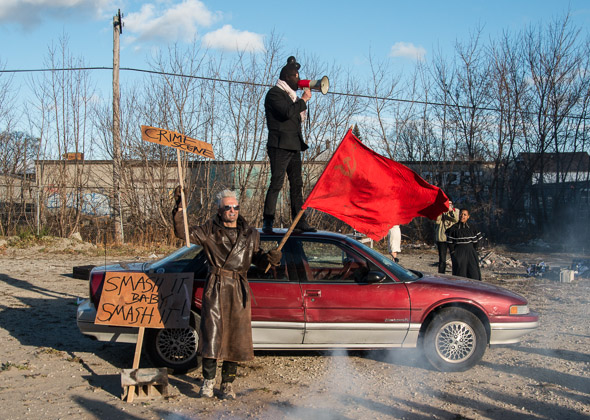 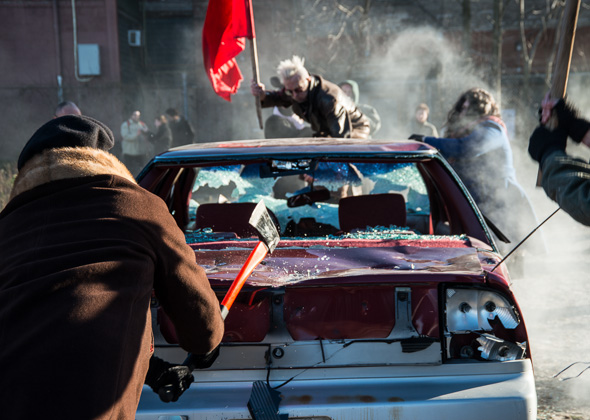 Joined by Estonian performance art group Non Grata, who have been growing in popularity in the New York art scene for several years now, Kantor's fête of ruin was to take place over the course of the day in two venues, beginning with the demolition of a vehicle on Sterling Road. 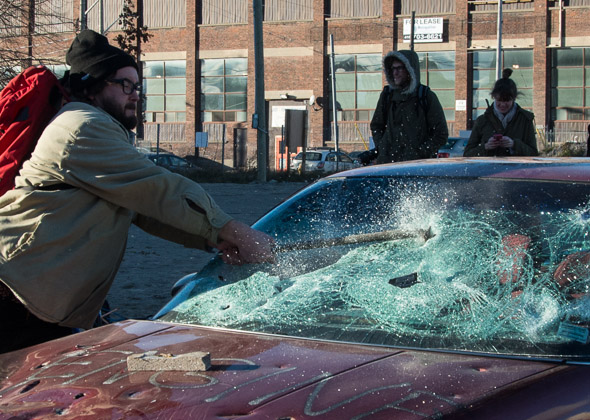 The hour-long "smash" involved performances by the characters of Non Grata, such as a young dark-haired girl in a flowing white dress, who began the afternoon by lighting the car on fire with a flaming stick. 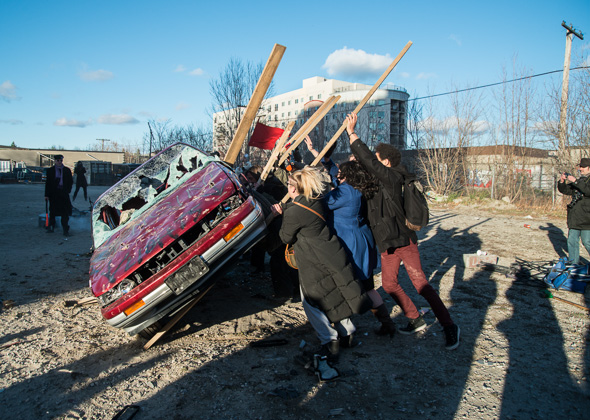 Another anonymous member of Non Grata walked the grounds in a black balaclava with two small balloons attached to the head--a criminal Mickey Mouse--with a sign that read, "Smash it, baby, smash it" while a second girl in a long black lace gown casually presented observers with weapons such as sledgehammers, mallets, hammers and a pickaxe, inviting them to destroy the car. 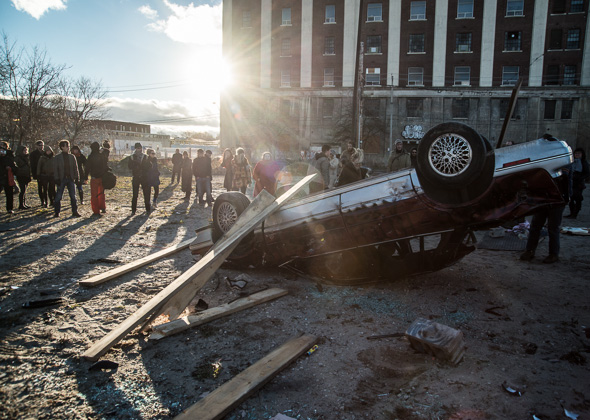 Miraculously, no one caught a pickaxe in the eye as the group stood for an hour, taking turns at shattering glass, stabbing rubber and, eventually, flipping the car on its hood. At one point, I overheard someone say, "This is so fucked up." It's not, really, when you take into account that it was a pre-arranged art piece. Add in a desensitized crowd, and it was almost funny.

The fucked up part came later in the night. 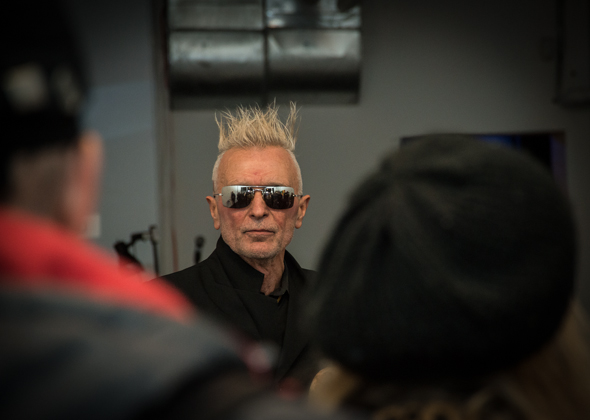 At the end of the hour, once the car had been flipped and destroyed, Silver Teeth (as Kantor could be dubbed) had dropped the electric guitar. He hopped on top of the belly-up car with his red flag, smiled and rebel yelled. Anarchists win, his gesture seemed to say, with consumerism (as embodied by the car) having been effectively smashed. The revolution had begun (for the day). 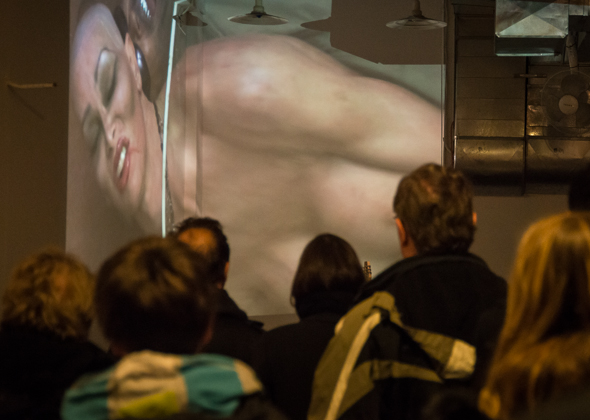 The two-part event continued three hours later at The Theatre Centre Pop-Up (1095 Queen Street West) with local performance and video artists such as Wesley Rickert and Jubal Brown playing music and mash-ups as accompaniment to violent video components that flashed on the southern wall of the venue. The same anonymous Non Grata characters from earlier had also returned to close out the night with the pièce de résistance that they have become famous for--a performance piece known as STORM GENERATION. 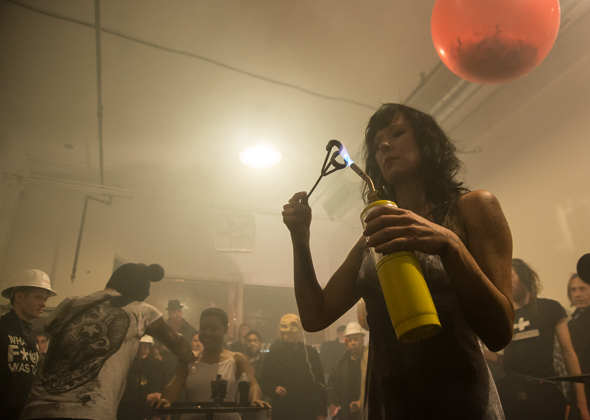 Non Grata has performed the piece worldwide, relying on their "floating" membership which allows artists to drift in and out of the group depending on their location. The group's motive to recreate real art is realized by allowing artists to experience complete immersion in their roles through anonymity. STORM GENERATION takes that anonymity to a new level, calling for the breakdown of capitalism through a controversial cult-like initiation ceremony that involves human branding. Yes, branding. 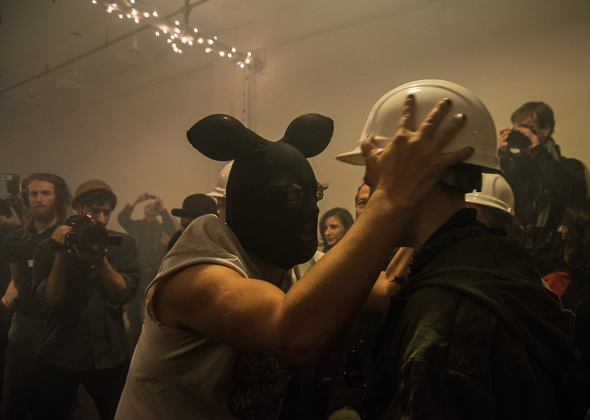 With Kantor back on electric guitar, Non Grata's Mickey Mouse Balaclava man stood in the center of the room, shouting in heavily accented English through a megaphone, "We are the Storm Generation. Do you love the Storm Generation?" The woman in the white dress from earlier circled the room repeatedly with a blowtorch, heating up an S-shaped rod of iron, a staple of the piece. A member of the troupe was pulled from the crowd--the young girl in the black lace gown. 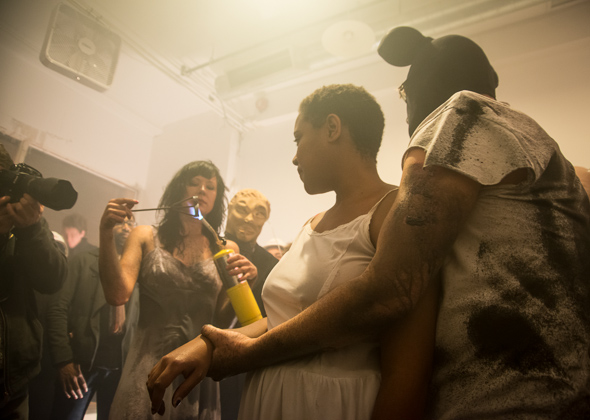 "Oh God, are they going to brand her?" I whispered to my friend, as the blowtorch and the iron rod made its way back to the centre of the room. It's important to note that at each of Non Grata's performances of STORM GENERATION, participants are willing; occasionally, even people who are unaffiliated with the group volunteer.

I covered my eyes and could only hear the electric guitar. When I looked back up, the girl proudly smiled an unsettling smile, the symbol of Non Grata's Storm Generation on her arm. 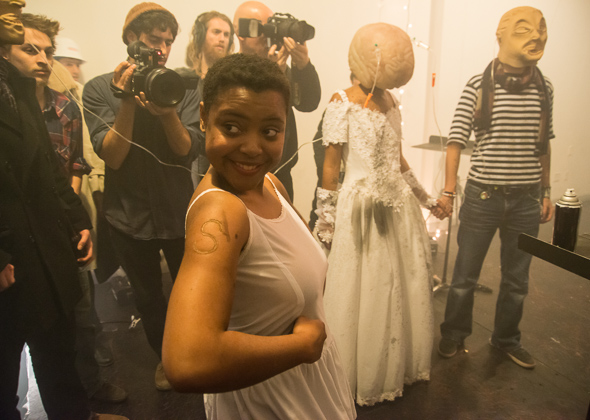 And with that, Non Grata had left their mark, and a strong message, on Toronto.