One of the more rewarding posts that I've put together for our historical Toronto series highlighted vintage signage around the city. A hodgepodge of fonts and styles, these signs exemplified the more mom and pop nature of the city's business scene at the turn of the 20th century and into the 1970s. But, as photographers like Patrick Cummins have demonstrated so clearly, it's not as if such signage has just faded into oblivion altogether over the years. Much has been lost, to be sure, but if you care to look for it, there's plenty of unique signage that adorns the Toronto streetscape.

Enter Toronto Type, a website recently started by type enthusiast and web developer Michael Lynch. Although still in its infancy, Lynch hopes to create a vast catalogue of this city's signage through his own documentary efforts and by encouraging readers to submit their own photos. Unlike similar efforts from other photographers, if the early photos on the site are any indication, here the focus is firmly on the type itself and the urban milieux is mostly pushed to the side.

I recently caught up with Lynch to ask him about the project and some of the early choices he's made in putting the website together. 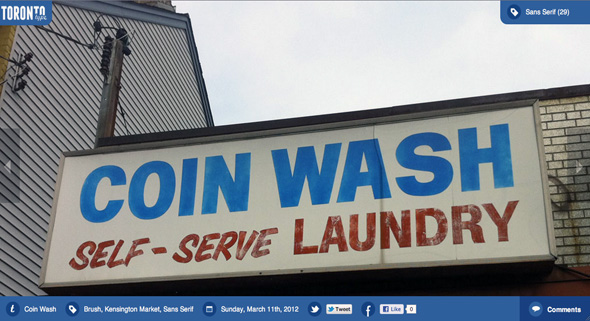 What was your inspiration for starting the site?

Growing up I was always fascinated by signage. I remember driving around with my parents and reciting out loud every sign I saw on the street. Needless to say, my parents hated it. I'm sure that's where my interest in typography and specifically signage began. The actual project however was inspired by a photo I took of the American Apparel sign on Queen St. about six months ago. I took note of it because it was different from their brand and after posting it on Facebook and receiving some attention, I knew a collection of some sort could be great for designers and typographers who are probably already noticing this kind of thing anyway.

What exactly do hope to do with it (how extensive do you hope the catalogue becomes)?

In the short term I'm focusing on getting other contributors to help post as many quality photos as I can and while that's going on I'm going to be testing out new features, such as adding a Google map to each post. Another priority of mine is designing and developing a mobile version of the site, which will likely be launched in the coming months.

In the long term I hope to get a good chunk of the GTA covered. I also hope to get the actual businesses and designers involved by either running contests, doing interviews or perhaps doing something else entirely.

What's the logic behind the site design you've chosen?

I'm a web developer by day so user experience (UX) design is something I take very seriously. I knew I wanted the typography in each photo to be the focal point, meaning everything else would be either less significant (like the dashboard, meta data and comments) or removed entirely. For this reason I wanted to do more of a gallery interface rather than your typical navigation and column based layout. Ultimately I thought the full screen UI accomplished these goals more than any other layout would have.

When will reader submissions be accepted?

Users will be able to upload their own images starting next Friday, May 4. Each image will be screened by myself before being published but the user will be credited as the author.

Have you thought about laying out the photos in grid format?

When I first built the site I actually included a toggle between the current full screen view and a secondary grid view. What I found however was that based on the way I had developed the site, the grid view posed more problems than it was worth. With both views on the same page, loading became a nightmare and that wasn't even on tablets or mobile devices where data plans and WiFi create their own restrictions. It's worth nothing though that I didn't lose the grid view all together. I actually repurposed it for the search results, where it's more important to see multiple posts in one view. And who knows, if there's a demand for it, I may consider working on it and bringing it back into the gallery.