Deadboy shoots for the stars in new gallery show

Street art has recently become a hot topic in Toronto, as Rob Ford's anti-vandalism policies and SPUD's retaliatory "War on Ford" have brought the debate over graffiti's artistic merit off the streets and into the galleries. While internationally-renowned street artists such as Banksy and Shepard Fairey have been able to sell their works alongside contemporary art's biggest names for years, the phenomenon is still relatively new to Toronto. Deadboy, the latest local artist to make it indoors with a solo show at Ossington gallery Don't Tell Mama, shows how difficult the transition can be in an uneven exhibition that proves street art needs something more than just topicality to be gallery-ready. 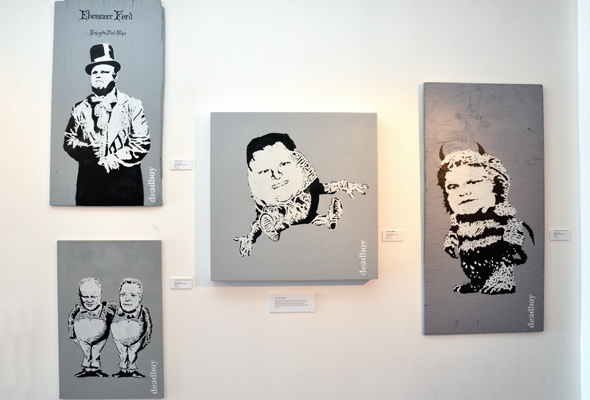 Much was said about Under the Influence's controversy before it opened, with gallery owner Paolo Dalla Rosa advertising his initial anxiety about displaying certain pieces. But to anyone who saw SPUD's previous Don't Tell Mama show, or even recently set foot on a downtown street, the work will hardly be shocking. Deadboy's treatment of Ford is conventional, and consists mostly of variations on his infamous (and visually clever) Tweedledee and Tweedledum portrayal of Rob and Doug. Here, Ford is again made out to be a childlike, cartoonish figure in pieces like "Where the Stupid Things Are" and "Humpty Dumpty." Other than these simplistic parodies, the artist offers little in terms of political argument. 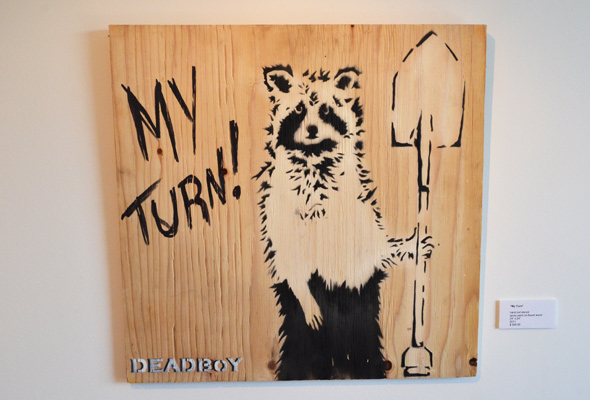 Deadboy's bio reveals that his foray into street art was the result of a kettling incident by the Toronto police during the G20, but local politics are not the dominant force for Under the Influence. In the spray-painted "Man vs. Food," a white man gorges on a meal while surrounded by starving black children. It's an overly broad criticism that provides more of a shock with its $3,500 price tag. 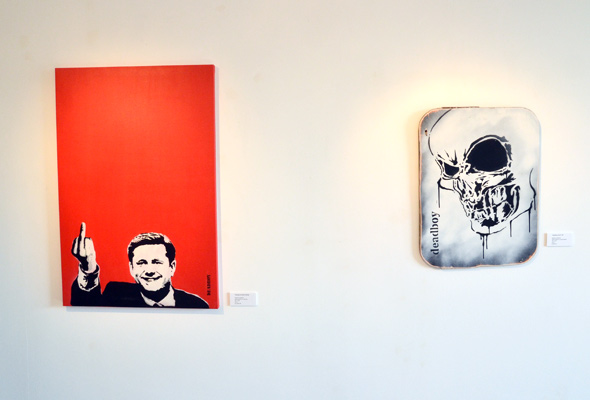 Likewise, the piece that most clearly hopes to be granted a "controversial" label is "REAL birth control," in which the provided solution is to shoot the pope. Yet hung directly across from the work is a series of apparently anti-firearm pieces that place guns in the hands of children. It's as though Deadboy was unwilling to commit to the incendiary message of his other work, or else just totally oblivious to the irony. 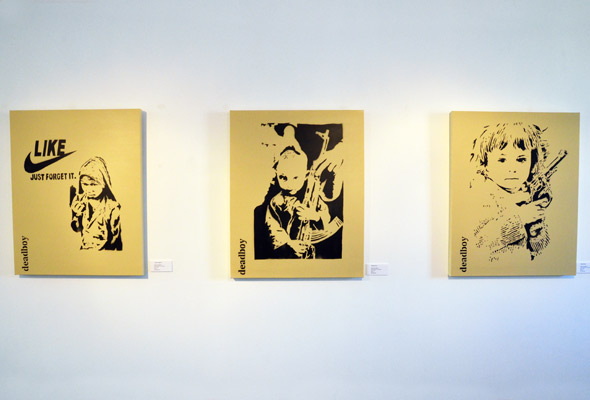 Here lies the problem with putting street art in a gallery. While each of these pieces could stand alone outdoors as a strong statement for their particular cause, their combination in a single setting reveals inconsistency on the part of the artist. Deadboy lacks a specific motive in his show, and thus the exhibit remains a collection of "influences" rather than a collection of work that demonstrates a unified voice. 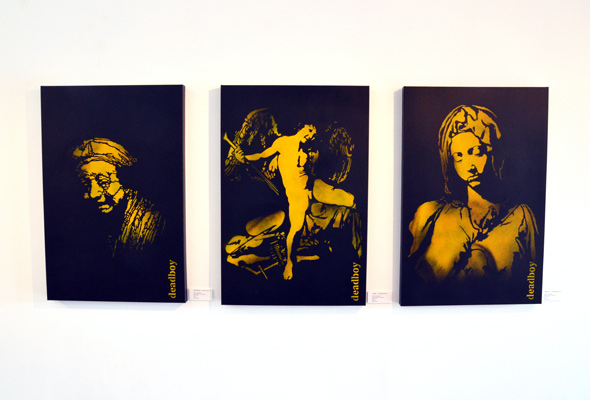 Deadboy, who argues for his own artistic validity with stenciled takes on the works of Michelangelo, Carvaggio, and Rembrandt, encourages the debate between street art and high art. But his painted portrait of Jean-Michel Basquiat, the fine-art superstar who began his career spraying graffiti, just shows his inability to follow Basquiat's lead in translating his message to the different medium. The anarchic spirit of street art doesn't need to be lost in its transfer to canvas, but its firm sense of purpose needs to stay.

Nevertheless, this show is well worth the visit. While Deadboy might not be able to cash all the cheques he writes with this ambitious show, it's clear that the artist wants to push the dialogue about street art beyond its mayoral reference points â and that's where it really gets interesting. 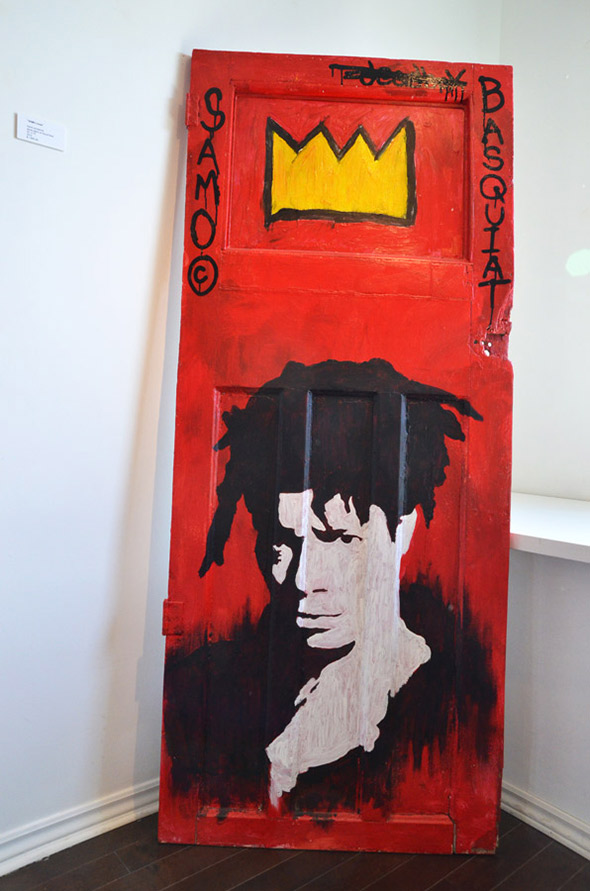 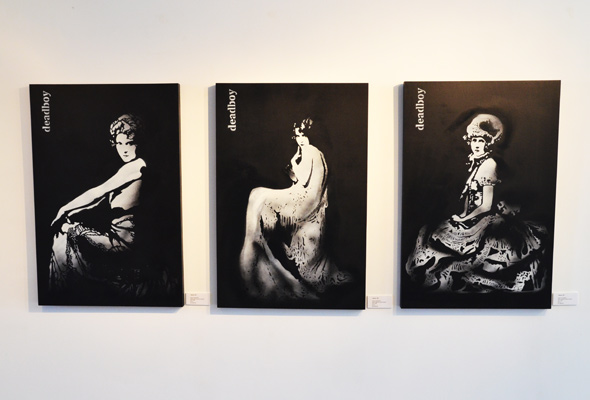 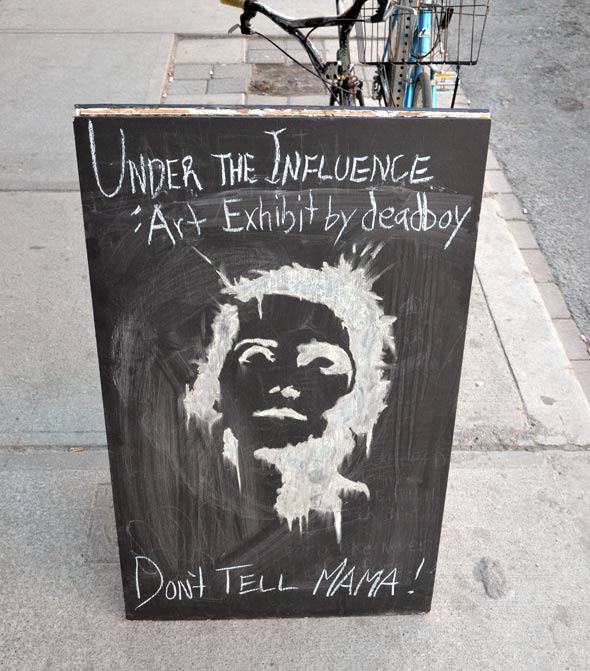 Under the Influence runs until the end of April