The best and worst of Zone C Nuit Blanche 2011

There are two types of installations at Nuit Blanche: the high concept pieces meant to take your breath away (these either succeed and are wonderful or fail miserably and give fuel to the cynics to complain) and the simple, cute little pieces that don't require big budgets or even big thoughts. You look at them, smile briefly and move on. Both are valuable, and both were well represented in Zone C this year.

As an added bonus, there were very few pieces that left a bad taste for me this year. As always, the art was mostly enjoyable; the difficulty came with the hordes of aggressive inebriated kids vying for each other's attention.

The other tough sell with Nuit Blanche is basic infrastructure. Between 1 a.m. and 4 a.m. I didn't see a bus that wasn't squished full, a cab that wasn't occupied or a piece of pavement that didn't already have a pair of feet occupying it. The city was busy. But those are the kind of good problems that come with running a successful event and this year's Nuit Blanche was one of the best.

Here are my hits and misses from Zone C.

A Brief History of Rebellion 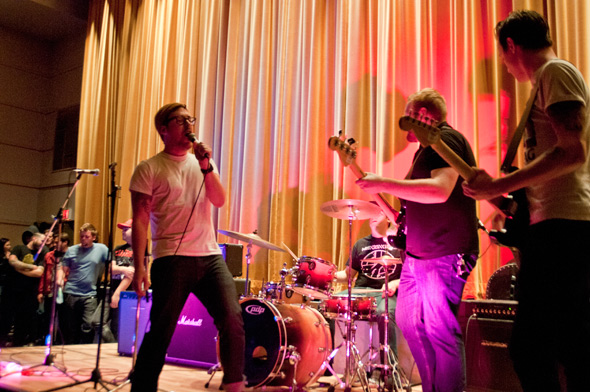 A Brief History of Rebellion took Smells Like Teen Spirit, a whole bunch of people and instruments and mashed them together inside a movie theatre. The result was the song being replayed, re-imagined and reinterpreted over and over for 144 times or roughly 12 hours. Some versions were tight and anthemic, others awere sloppy and revolutionary, but the performance worked because of both — this wansn't a concert, it was an art-thing. Seeing musicians and non-musicians alike let loose to a song that's played such a significant role in so many lives is kind of beautiful, no matter what it sounds like. 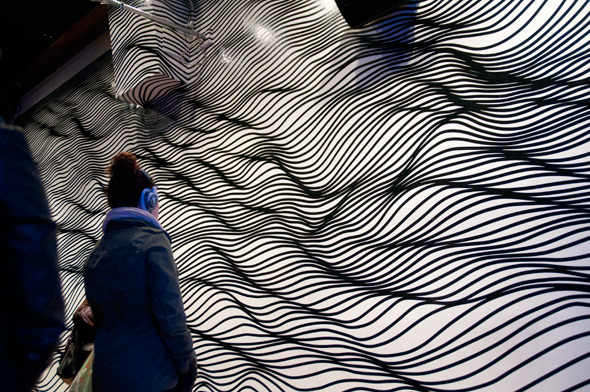 The umbrella of Fly By Night at the Gladstone was certainly one of the stronger shows of the evening. The building hosted a cabaret, karaoke, and a knitting circle, not to mention immersive sound art, a giant wicker nest and the opportunity to test your trust in strangers by sending them secrets. 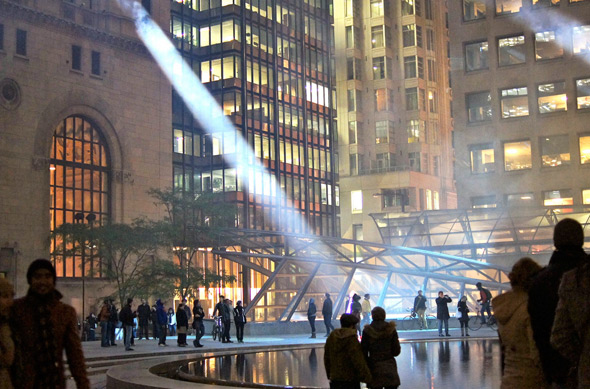 Soon was the art installation equivalent of a movie like Cloverfield. It's all build up and no payoff. Except with Soon, that's the whole point — and it's awesome. Inside the square at Commerce Court, spotlights swirl while the sounds of grumbling earth and helicopters fly by. Smoke rises from the ground and everyone is standing looking for the impending event, looking and looking and looking. It never comes, but most are still satisfied by the spectacle of it all. Photo by Roger Cullman 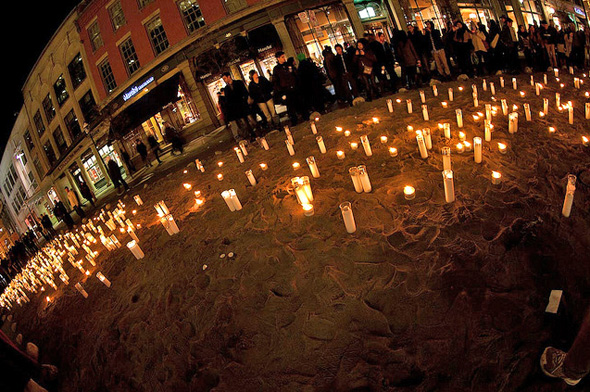 Officially, the candles spanning the sandy stretch of Yonge Street occupied by Memorias represented the lost lives of Ontario-based migrant workers. But when I first came across it I saw it as something much broader — I took each candle to represent a memory. As Gawkers were invited to share their thoughts in the cool, windy air, the community grew and grew. Some candles would burn out, some would some burn on — such is life. Photo by Oscar Strawczynski

The Way Up is the Way Down 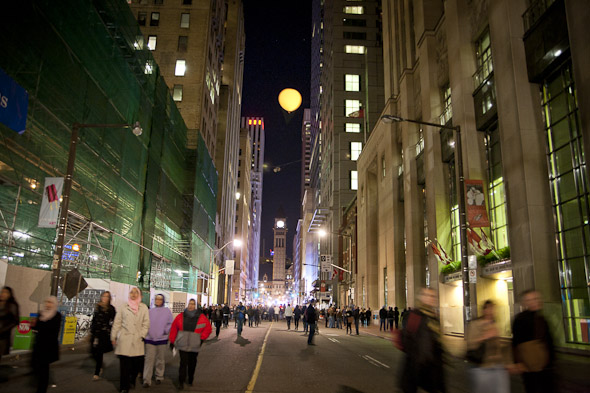 If you spent any time in the financial district during Nuit Blanche this year, you probably heard the faint echo of a church bell ringing in the background — almost constantly. That was The Way Up is the Way Down, and it wasn't a bell, it was a balloon, floating high above Bay Street just north of King. If you dialed 647-247-4525, the bell would light up and ring. It was that simple, and surprisingly fulfilling. 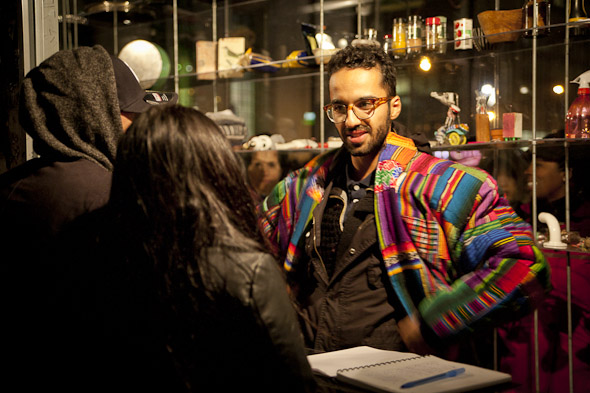 At The Free Shop, artist Basil AlZeri, who not so long ago was relieved of half of his worldly possessions, transformed a bus shelter on Bay Street into a makeshift gift shop housing all his worldly possessions. The public was invited to examine the products and choose one to take home with them. Of course, it brings up heavy questions about consumerism and meaning and wealth and ownership, but the best thing was how flawlessly that bus shelter became a gift shop — remarkable. 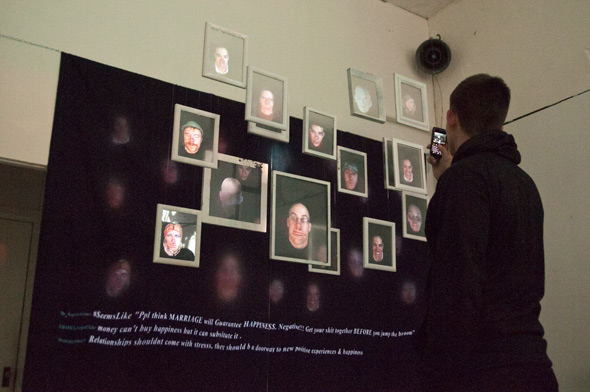 Inspired by Charles Spearin's wonderful album of the same name. The Happiness Project (Nuit Blanche version) was a mish mash of all sorts of wonderful things. The first thing you noticed when you walked in the door were the exotic balloon chandeliers. Then as you headed to the back of the room there are video screens with people's faces on them — faces you slowly recognize as the strangers around you. Then you want to see your own face up there too so you get a picture taken, but when it's on the screen it's all distorted and gross, but still kind of wonderful. And it's okay, because everyone else looks distorted and gross too so it's nice that you all share that. Then you walk upstairs and there's a marshmallow tree and someone gives you a chocolate covered marshmallow to eat and you see why it's called 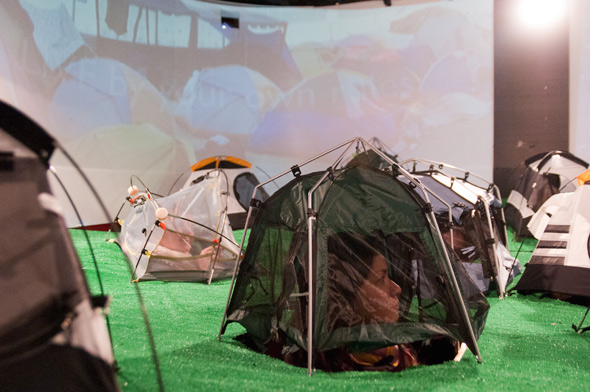 While the line might have deterred a few people, it looked much worse than it was. As you entered Intensity, you were told that you're about to see a "fresh perspective on urban living." You then walk through a curtain into an enclosure with a dropped ceiling with holes to stick your head through. If you choose to comply (why wouldn't you? — you already waited in line), you look up to see your face inside a mini tent, with about a dozen or so others around you. After about ten seconds or so you're informed you're being evicted and you exit. It's short and sweet, but really kind of cute — looking around at all these wide eyed faces masked by mini tents. It didn't have the political or moral weight intended by the artists (addressing homelessness), but it was definitely worth the peek. 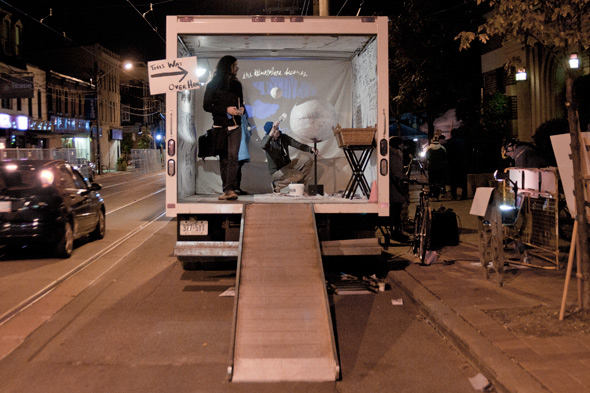 The cubes refers to 20 cube vans, rented by the Parkdale BIA for artists to use as mobile installation spaces. These vans were then scattered throughout the neighbourhood for performances and other fun. It was a fantastic idea that allowed for remarkable diversity — for instance: I saw the history of the world evolve in front of me while listening to sweet folk songs about skeletons at 4 a.m. That was a first for me. 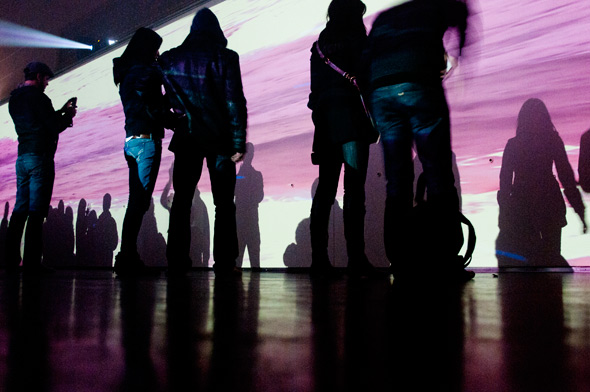 In a room on the second floor of the Design Exchange, Nuit Blanche's trippiest installation took place. Je t'aime Alouette is a love letter to Canada's Alouette satellite — launched in 1962 — and the de facto chill out room of the evening. The space was decorated with disco balls encased in crystal, and drenched in the sounds of a slow fuzzy acid trip. Some people made shadow puppets on the wall, while others sat down in the centre of the room and took in the atmosphere. 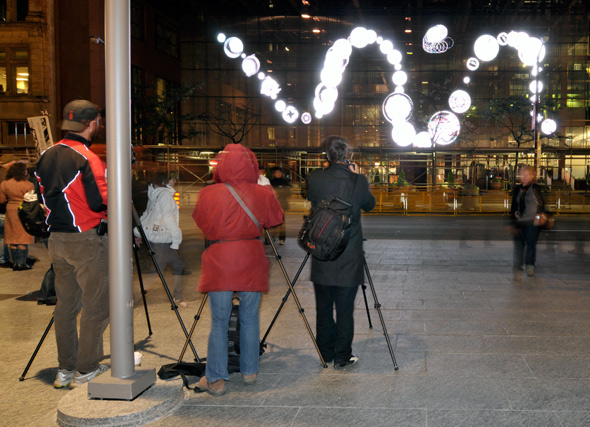 FLUXe is an interactive installation that lets the public push and prod on a video screen and have their noodling appear as an enormous projection on a building across the street. It's hardly a new concept, but where FLUXe succeeded was in the beauty of the projections: the vibrant 3D-esque compositions spun constantly, changed colours and, naturally, remained in a state of FLUXe. 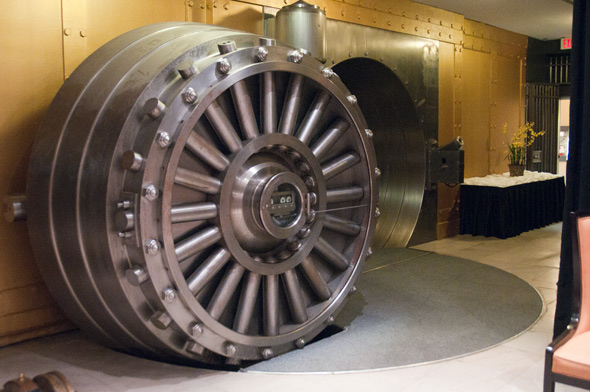 Monster Jam is a bizarre video of the true life events that took place at BCE place in Vancouver back in 2004. It's a monster truck rally gone wrong with pantless streakers taking over the field while security bumblingly chase them around. The video is almost wholesome by today's standards, in that these days there is a good chance every single one of those innocent party people would get tasered. Bonus: the exhibit took place inside the vault at 1 King West.

I Just Know That Something Good is Going to Happen 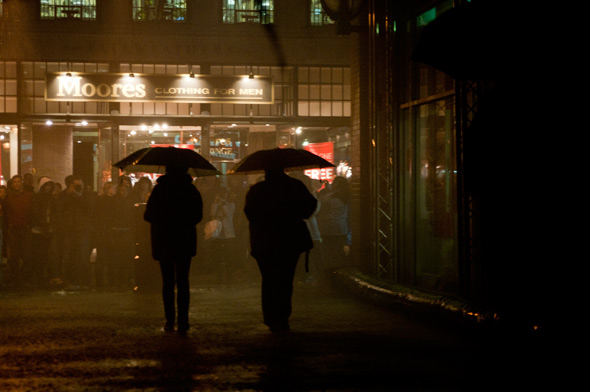 I'm sure when artist Curtis Grahauer was dreaming up his contribution to Nuit Blanche, he thought he had come up with something fun and playful that might spark the public's imagination. But what he failed to take into account when building an alleyway that simply spits out water, is that Nuit Blanche takes place in October and October can be cold. The last thing anyone wants on a cool damp autumn evening is to be fake rained on. Even with an umbrella, I still got uncomfortably wet. It did make for some nice photos, though. 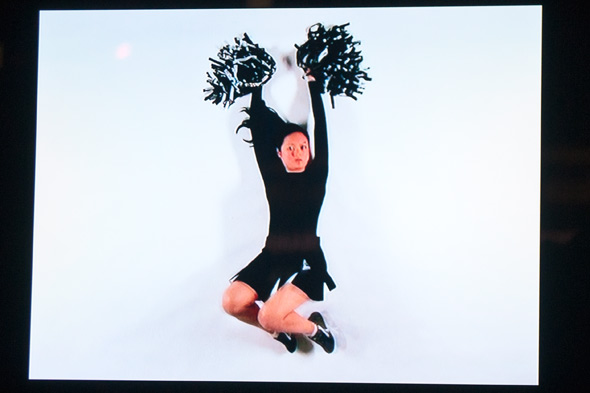 As the first exhibit of the night to make me shrug "meh," Stereo Efficiency Cheer felt a little too much like an art school project in that it seemed heavy on theory and low on delivery. Case in point, the statement: "The video is a fanatical salute to early 20th century principles for increasing worker efficiency." Essentially, the video is meant to represent how the mind can be controlled, but the body is flexible, or something? Pass. 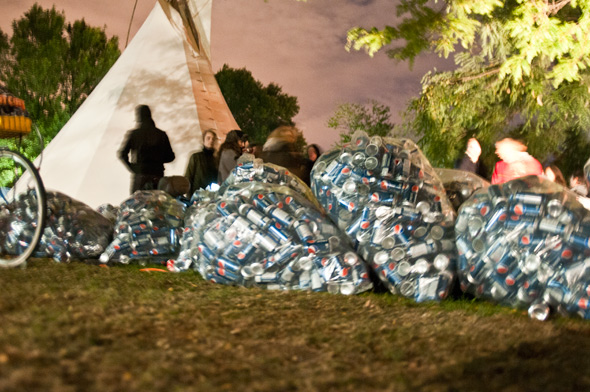 According to the manual, We Are Water is a 1600 sq ft maze built entirely with recycled cans and bottles where the centre is an oasis of a water fountain. It was meant to bring attention to the 30 per cent of the population without access to potable water. Unfortunately, 1600 sq ft was reduced to approximately 16 sq ft — which is way easier to navigate, but completely anticlimactic.

Photos by the author and Jesse Milns, unless otherwise noted. Lead image by kilowa