The best and worst of Zone B Nuit Blanche 2011

So that was another Nuit Blanche, Toronto. The "user-reviews" are, as usual, mixed — but I think, for the most part, it was a good one. Yes, there was the joy of seeing a foam-mouthed teenager carted off in an ambulance, and a point around 2 a.m. when I realized that I'd been hearing nearly constant sirens for at least an hour, and the line-ups, the why-can't-I-get-what-I-want-the-minute-I-want-it lineups. And that's not to mention the unfortunate frat-like vibe that spun its web over the Yonge-tethered exhibits, or that I was dumb enough to cart around a massive tripod all night. But, hey, that's the deal, isn't it?

Nuit Blanche is like a long canoe trip: it always sounds so fun before it begins, but inevitably numerous spirit-dampening portages sit on the horizon, and the whole thing ends up being as much work as it is enjoyment — for esteemed bloggers making a go at live coverage as much as for those out to catch some official installation-based street art. Is that a bad thing? Not really. Whatever the drawbacks of line-ups, drunk people, corporate exhibits (hi Chevrolet!), and the challenges of getting to all that's good, there's an undeniable magic about combing the city in search of all-night art.

I spent the bulk of the first part of my night in Zone B. Here are my hits and misses. 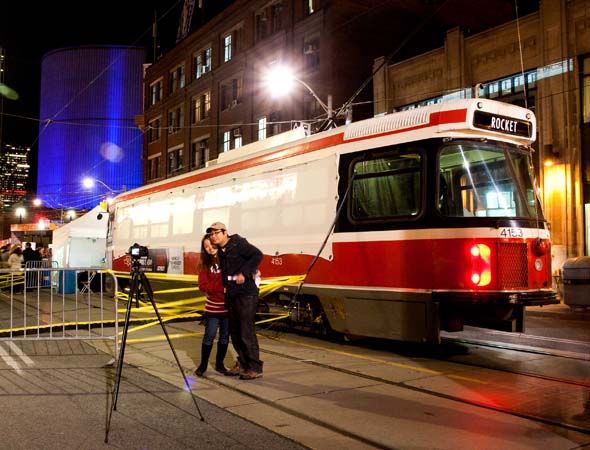 Hype met. Ride the Rocket wasn't really mind-bowing, but it wasn't disappointing either. The line-ups neared an hour-long at the height of the night, but that's what happens at the buzzy exhibits, and by 2:00 a.m. people were already getting by in around 20 minutes. It was a bit low budget &mdash right down to the schtick of the narrator/tour guide — but the exhibit still managed to deliver on the promise of TTC trip to be remembered.

Through the Gorilla Glass 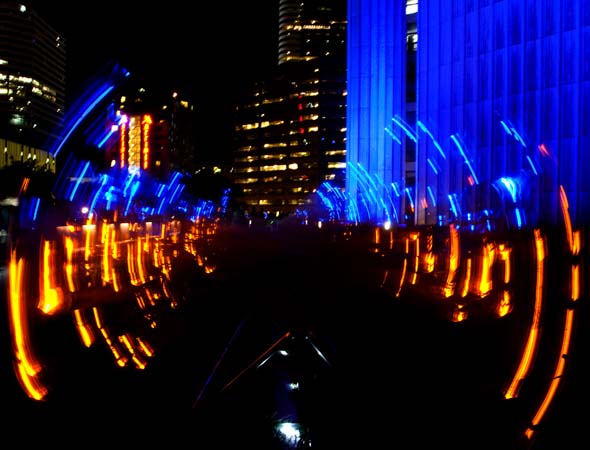 Subtle. Interactive. Perfect? Almost — Through the Gorilla Glass was a delightful City Hall surprise. Unlike its property-mate, Flightpath, this was a completely inviting exhibit, right down to the volunteer staff who tried to help viewers/users create smooth and regular waves with the mutli-armed exhibit. The whole thing looked pretty cool when multiple people were pulling on the arms, but when one person was able to control its movement, I almost cried. But not really. 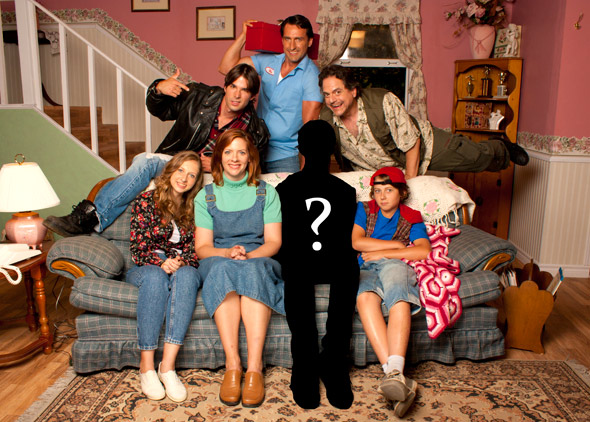 "There's a time for love and a time for living / You take a chance and face the wind / An open road and a road that's hidden / A brand new life around the bend." So begins the intro song for the sitcom that brought the world Tony Danza — Who's the Boss. And while the best baseball-playing man-maid was a great pseudo father for Jonathan, this chance to play a pro-typical sitcom-kid's father was as fun to watch as to enact. Sadly, no one I saw matched Danza's on-screen presence. Photo courtesy of Nuit Blanche. 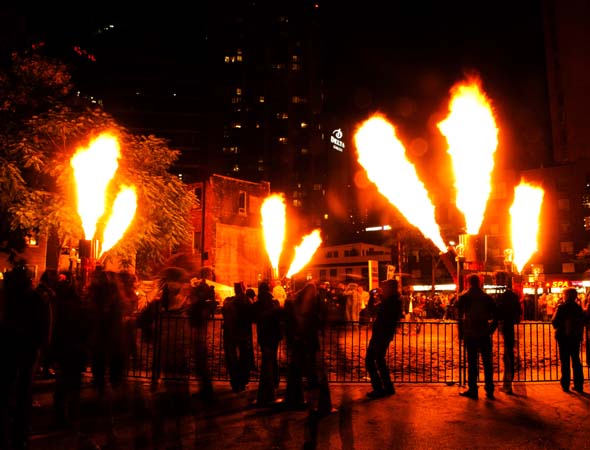 Heat! No really — this one attracted droves on account of its pure spectacle, but also the fact that the various "valves" offered very real warmth for the cold and weary Nuit Blanche wanderer. Whenever the arson-expert controlling the installation managed to get the whole thing puff-exploding at the same time, the applause was more than well-warranted — it was genuinely exciting. 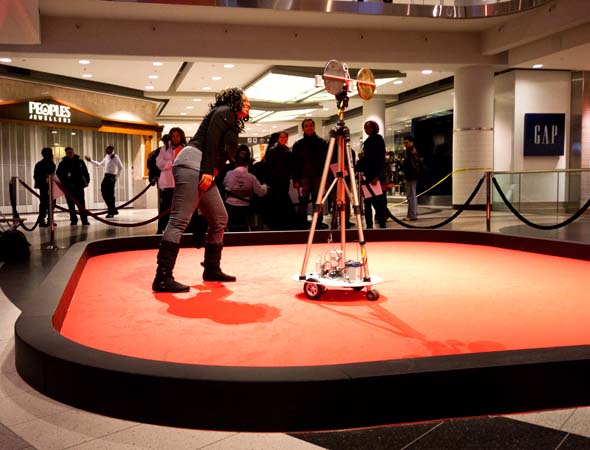 Had this exhibit been located in some low-light, low-traffic area, it would have sucked. Being, as it was, at the Eaton Centre, it got just the kind of attention artist Ken Rinaldo must have been hoping for. With hordes of wanderers taking refuge at the Eaton Centre, it enjoyed a crowd most of the night. And that it needed. It's not much fun watching who some smile-driven robot picks to photograph if there aren't people pretty much everywhere. Although a bit of a let down after a subject had been selected, Paparazzi Bots was nevertheless worth the trip for its sustained its temporary creation of Nuit Blanche celebrities. 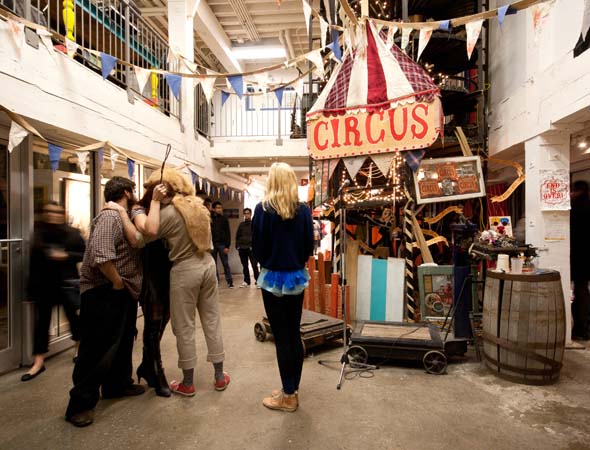 The Distillery District, while very much a food destination, also turned heads with its most carnivalesque exhibit.

The Other Painting Competition 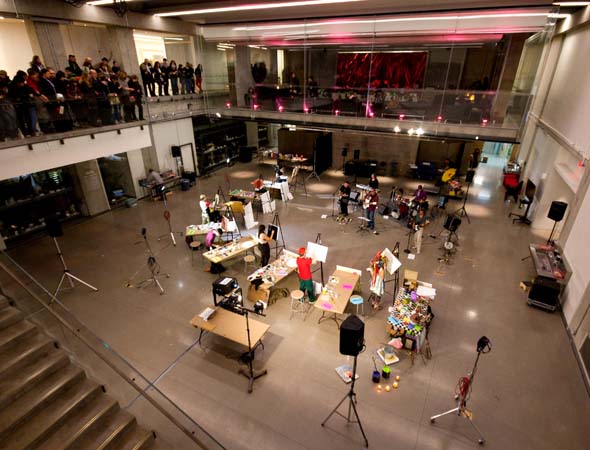 There was nothing wrong with this exhibit. On the contrary, it was completely pleasant. But, in as much as that's true, it was best used as a place to warm up, rather than a destination in and of itself. Hey guys, painting is great, but I want to see some cool shit with lights tonight. I was promised that, at the very least. 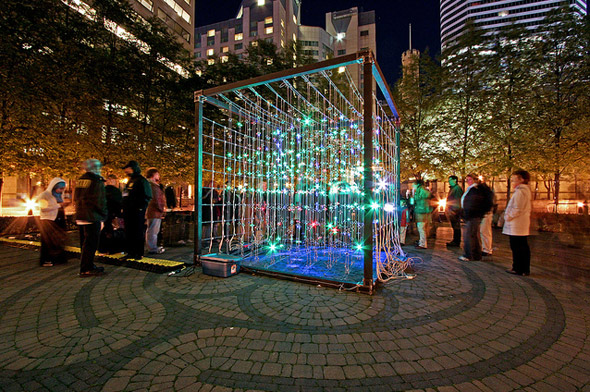 In the department of kept promises, Shannon's Fireflies was, on the other hand, a quintessential Nuit Blanche exhibit: it was cool stuff with lights. Problem is, that's all it was. It didn't help that when I paid my visit no one was sober enough to make it work until a helpful volunteer pointed out where best to point one's voice. Then there were lights. And then I left. Photo by Jackman Chiu. 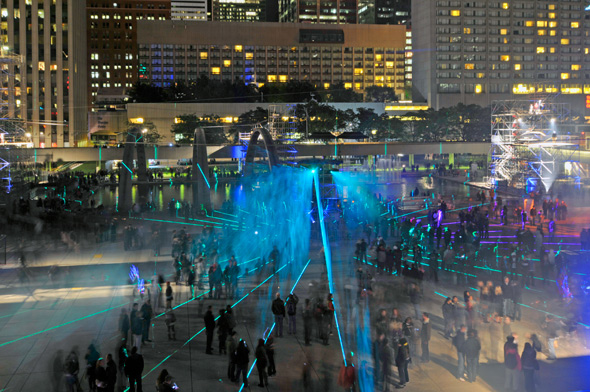 Okay, so this was a spectacle — but in the most forced way. The dream of a Nathan Phillips Square covered by winged-humans was killed not just by the long lineups, but by the long intervals between each flight. When I arrived at 7:20pm I thought the sparse crowd in the square would eventually give way to hordes of bird watchers. It never happened. The disco-style light show was, on the other hand, pretty good. 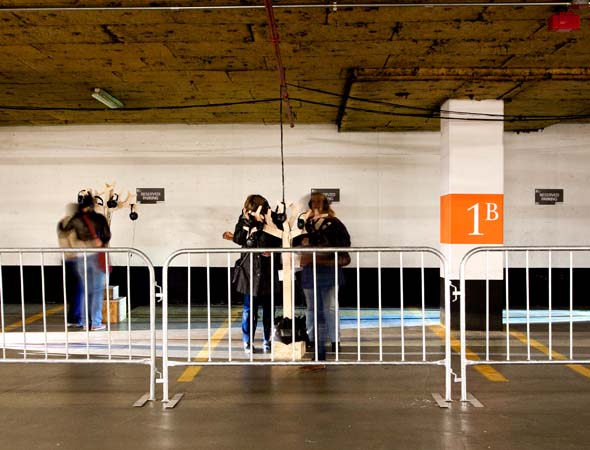 An underground parking garage has loads of potential, but this earphone-based "installation" was a big miss. While Nuit Blanche might privilege interactive exhibits, the silent nature of this one left most underwhelmed and slightly confused.

With contributions from Tim Shore. Photographs by Dennis Marciniak unless otherwise noted. Lead image by the author.