The best and worst of Zone A Nuit Blanche 2011

The thing that defines Nuit Blanche more than anything else is the audience. I'd argue that the most interesting thing to see as you walk the streets in the brisk fall air is the reactions and behaviour of those around you. Saturday night, I heard constant complaints from hipster-types about how this was "the worst Nuit Blanche ever," all while avoiding teenagers who were drunk, high, or a combination of the two. For every person you see that actually appreciates the event for the art, you come across ten punks who use the night as an excuse to act a complete fool.

But I digress. I spent the majority of my time in Zone A, so here are some of the exhibits that stood out to me (and a couple that didn't). 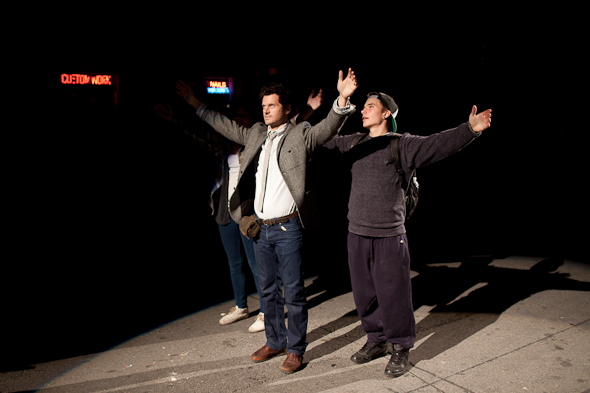 Hands-down the best "exhibit" that I saw over the course of the night. It was really nothing more than two spotlights shining down into the middle of the street at Yonge and Grosvenor, but its beauty was its simplicity. Essentially, the street corner was turned into a stage, and random people become the performers as they stepped into the light and did...well, whatever the hell they wanted. A large crowd was consistently on hand as they were treated to impromptu acts of performance art, acrobatics, and a 300+ pound man running through the light with his shirt off, screaming at the top of his lungs. 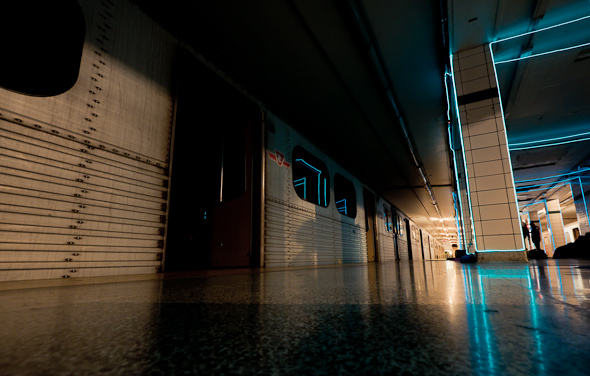 For the first half of the night, you couldn't even get near Lower Bay Station, which was the site of a putative slumber party. The lineups for this one were huge, but it was clear that people wanted to be a part of it, and as the night went on, you could see people filling the trains and.....well, sleeping. The aim of this one was clearly to create a collective, unusual experience, and in that respect, it was very successful. 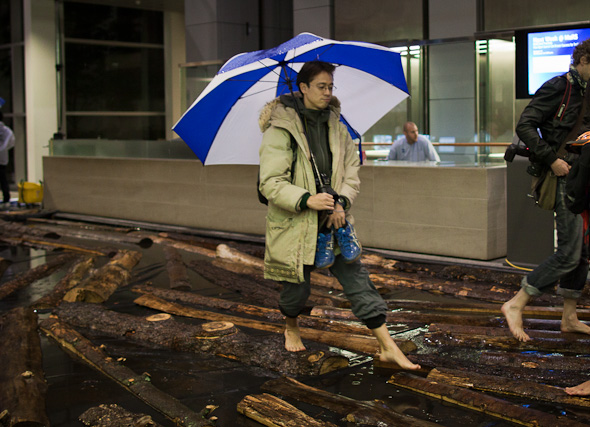 The MaRS Discovery District was the site of one of the more popular exhibits in Zone A, which saw a long shallow pool of water (with a depth of about one centimetre) laid out in the building's atrium. The first half of the pool was simply water, but the second half was a mix of water and logs. This exhibit was all about crowd interaction, and people were having the time of their lives as they took off their shoes and socks and ran through the water. The logs were quite the obstacle for some, however, and more than a few people took a tumble as they tried to navigate through them — this is probably why you had to sign a waiver before you went inside. 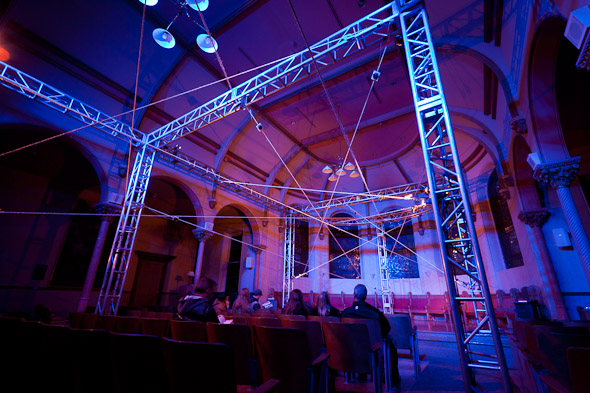 I stumbled across this one quite by accident at Victoria University, but was pleasantly surprised by its concept. A booth was set up outside the building, and people lined up to step inside and give "confessions," through which their words were turned into a low, sustained feedback that filled the building's chapel. This was achieved through live FM radio broadcasts of the confessions, which were then processed through suspended ropes in the chapel. It sounds complicated, but it was absolutely intriguing to see and hear. The line-up for the confessional booth was, however, inevitably long. 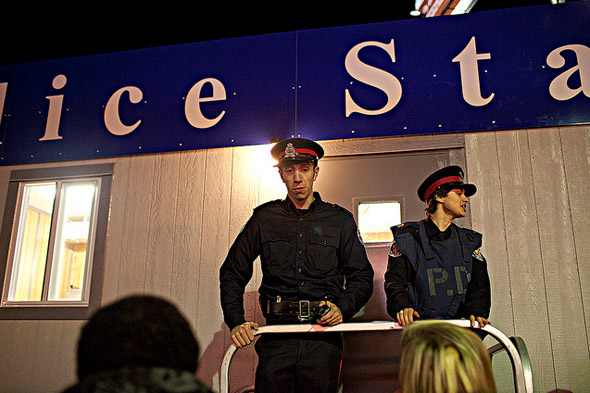 This exhibit was the place to be if you've ever wondered what it would be like to get arrested, detained and booked. An office trailer was converted into a makeshift police station in the middle of Yonge Street, and actors portraying police officers would stroll through the crowds and randomly "arrest" people based on randomly-generated profiles. This set-up made for many interesting and funny scenes — at one point, a very confused and somewhat frightened elderly man strolled up to one of the actors (thinking that he was a real cop) and asked him "what that hell is going on in Toronto tonight?" The actor, to his credit, stayed in character and didn't laugh. Photo by Ryan Kelpin 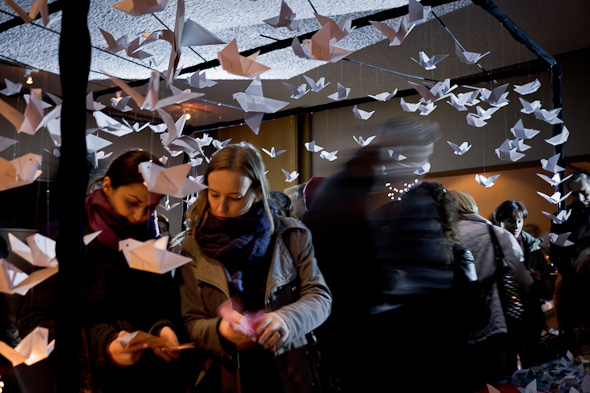 Housed at the Bata Shoe Museum, the CFC Media Lab was a collection of exhibits that married old and new technologies into visual and aural spectacles that paid tribute to Marshall McLuhan. Here's a breakdown of the exhibits:

Like any art show, a couple of the exhibits at Nuit Blanche were underwhelming and, at least in my opinion, didn't achieve what they set out to do. 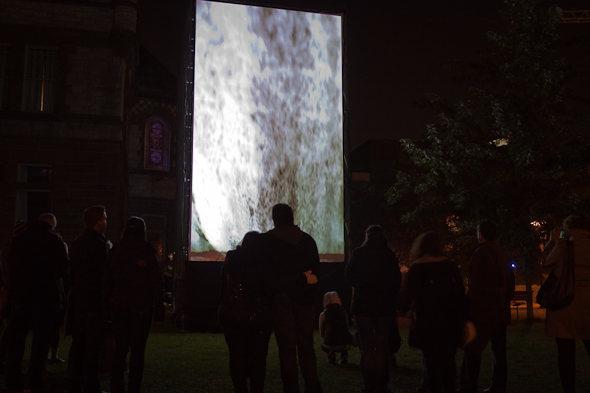 This video installation at Victoria University played an endless loop of Niagara Falls, inverted and slowed down. That's basically the long and short of it, and I heard several people saying "I just don't get it" as they watched the upside-down waterfall. An interesting concept that simply didn't seem to evoke the emotions that it was supposed to.

Sonic Spaces (the kinetics of sound) 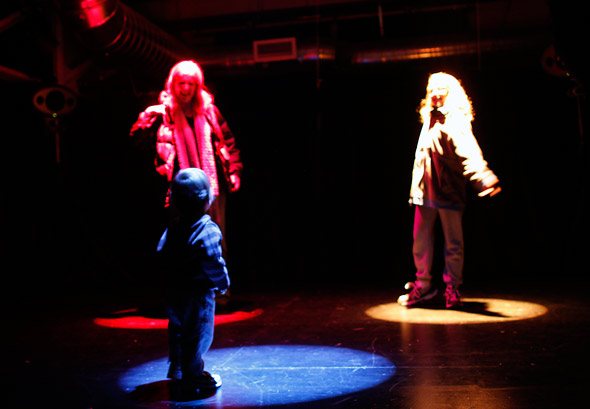 The main problem with this one was its lack of believability. It supposedly converted movement into sound, but the problem is that the sound was so inconsistent with the level of movement and the number of people on the stage that it was impossible to tell if it was legitimate or not.