The G20 collides with Regent Park at Side Space Gallery

You seldom meet people who are as socially conscious about Toronto's inner-city issues as photographer Matthew Higginson. Last November, the 24-year-old Higginson mounted St Jamestown 2008-2010, a frank and vibrant social examination of the lives of residents within not only Toronto's lowest average income community, but also one of Canada's most densely populated ones. Globe and Mail art critic R.M. Vaughan said: "Refreshingly political and yet refreshingly free of preachy over-determination, Higginson's work neatly straddles the boundary between art photography and journalistic record-making."

Last week, Higginson debuted his second solo show Fourteen Thousand Dollar Glow Sticks: When Entering One's Home, a self-funded installation and projection project that sees him continuing to explore and document Toronto's most diverse, but often ignored, communities. For this exhibit, Higginson spent nearly a year developing and working on the concept, contrasting striking — and undeniably evocative — images of excessive spending and outrage during the G20 with the stagnant re-development of Regent Park and the subsequent displacement of its residents. 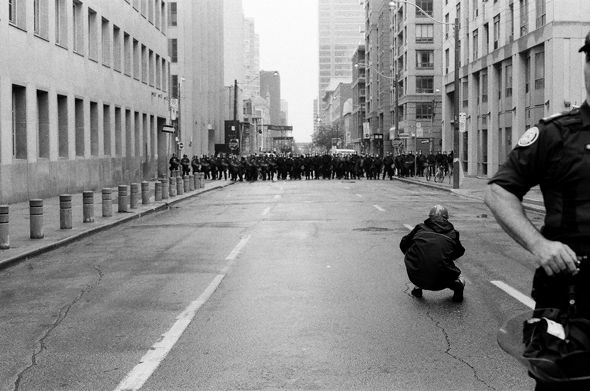 In fact, you'd say he's really outdone himself with his latest effort, but connecting to communities comes natural to him. Born in Etonia, Saskatchwan, Higginson has lived throughout Canada and, by day, works in communications for LEAF, a not-for-profit organization that focuses on urban forest issues. Unexpectedly, he's not what you'd call a "trained" photographer, but credits mentors like Vincenzo Pietropaolo, a social documentary photographer known for capturing the lives of residents in his own Little Italy neighbourhood. 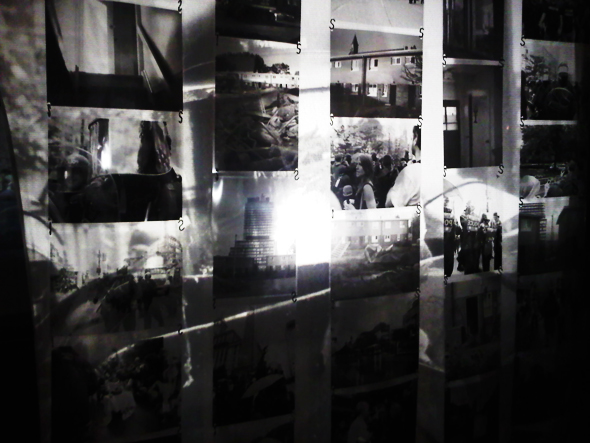 St. Jamestown was developed while Higginson was living in the community, capturing first-hand the people who made up the neighbourhood and the changes that seemed to be happening daily. "The spirit of the place was changing on a massive scale," he recalls. "With the gentrification of Sherbourne to the west, and the redevelopment of Regent Park, which had already begun in the south." With Fourteen Thousand, he consciously began constructing the idea on the weekend of the G20, right from the middle of the action. "It was a very personal journey," he says. "It was the first major demonstration on that scale I'd ever attended, and it was incredible to see the energy on that first day." I was watching from my apartment in fear. Eventually, he says, there was chaos and an "insane" police presence and, well, we all know what happened next. 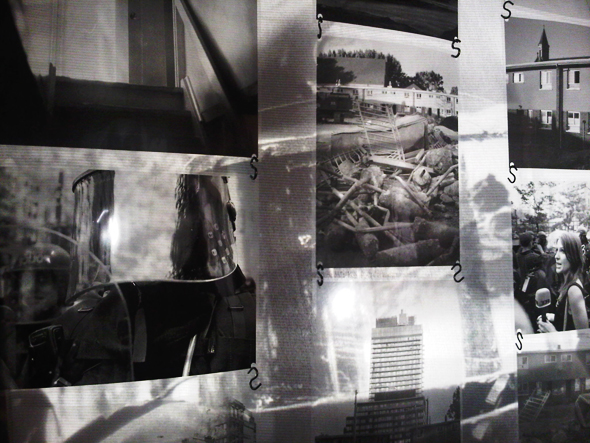 "In the months following, I saw a number of shows around the events of that weekend, but I didn't find one that captured that intrusiveness, overwhelming chaos, and the way the messages were obscured by the same images over and over," Higginson says on why the show is so "delayed." He needed critical distance, so to speak, and wanted his collection of photos to touch on something greater than outrage. Inspired by National Post photographer Brett Gundlock's Prisoners Project about the experience of being arrested, Higginson wanted to focus on his own experience, his own journey and ultimately his own subjectivity: "It's something I can't escape, but I can identify and work from. I couldn't let the work die, and I knew I needed to present it in a way that would convey that." 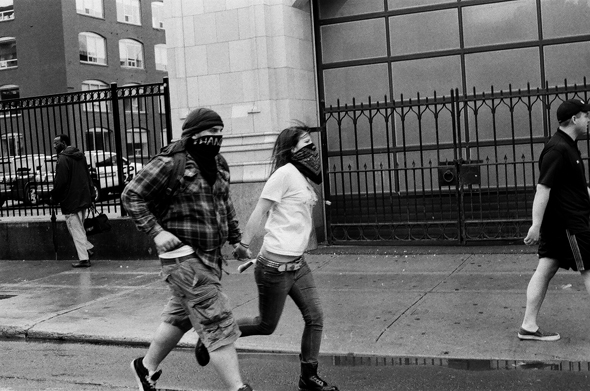 And where does the "Fourteen Thousand Dollar Glow Sticks" come from? "$14,000 was how much of our tax dollars were spent on glow sticks during the summits. I don't know how and I don't know where. But regardless, it jumped out at me as grossly inappropriate. As we approach an age of even greater austerity, and as social programs are being slashed all over, you can still throw money around like that? It's offensive." And that's where Regent Park plays a role in his commentary. "[The glow sticks] were one of the triggers that made me really question the true cost and who was paying for it; we can afford to pay for the grey paint that goes over the political expressions of freedom written on our walls, but we can't afford to fix the problems that graffiti points to in the first place. We can afford to pay for lavish meals and glow sticks, but we can't pay for social housing and harm reduction."

Indeed, while our world leaders were eating quail instead of cake, very real social issues were the casualties of our attention. "I spoke with a lot of people in Regent Park when I was working on this project, and just trying to get a frontline viewpoint on the situation. It was mixed, and I'm not against the redevelopment, but I do question it, and I wish there was more of an effort to get those stories out." 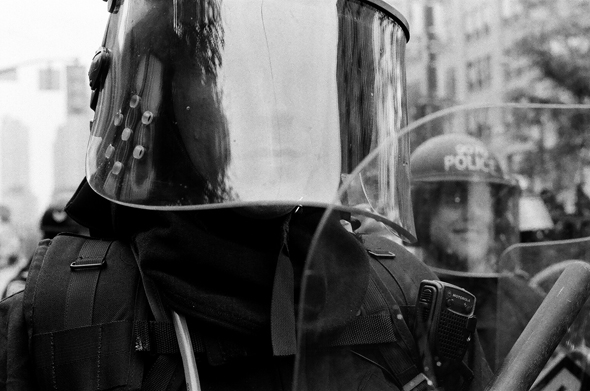 But why Regent Park? Higginson says it was about proximity and the apparent stigma surrounding the community. "I had lived so close for so long, but I was unconsciously avoiding it." He went on to document housing that was scheduled to be torn down for condos or grocery stores or something gentrified, and the broken windows, torn curtains, dried roses, old children's toys, and murals began to paint a bigger picture of the lives behind these forgotten homes. Shortly after June 2010, all that was left in most areas of social housing were empty basement ditches.

Higginson's exhibition will also be the last at Side Space Gallery. After five years and countless other shows that have granted young artists the freedom of expression and experiment, Side Space Gallery is shutting down - at least in this incarnation — because the lease is up. "Schuster Gindin [the gallery's curator] offers so much support to the artists. She's put in so much time and energy into helping others get their stories out into the public sphere. It will be exciting to see where the project develops next." And I agree with Higginson when he says we need more spaces like this — and with R.M. Vaughan when he says we need more shows like this — in the city. "For the people, by the people and supported by the neighbourhood. It really builds a community."

Matthew Higginson's Fourteen Thousand Dollar Glow Sticks: When Entering One's Home runs until October 1 at Side Space Gallery. The exhibition space is a large window gallery, and the art is viewable 24/7 from outside. 1080 St Clair Ave West.