Those who've spent time in downtown Toronto over the last few months might very well have come across one or two cartoonish-looking rabbit characters around town. They can be found on buildings along main streets, on garages and other structures hidden away in back alleys. There's even one that can be observed from the GO train as one travels out of Union Station.

The rabbit has many moods: sometimes it smiles, sometimes it laughs â while at others his rather large and fearsome teeth are bared in a somewhat menacing manner. No matter what expression it wears, the ubiquitous rabbit always gives me a quick smile as I pass through the visual noise that tends to dominate the cityscape.

So I set out to capture as many examples of these pieces as I could find, and along the way the artist behind the rabbit (known as "Poser") told me a little bit about his work. 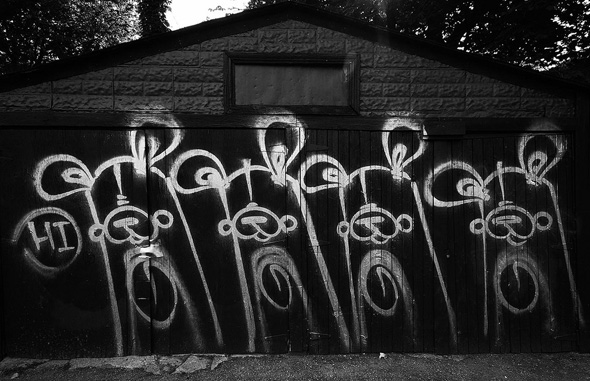 How long have you been painting and who were some of your earlier influences?

I first picked up a can back in late 2004 and spent the next year tagging anything and everything I could in my neighborhood [which was in Ottawa at the time]. Unfortunately I didn't know too much about being discreet about I managed to get caught within a couple months. Luckily the police weren't involved. But my parents certainly didn't let it slide so after that blew over I took a break, mostly sketching, and probably only painting enough walls to count on my two hands till late 2006, when I started back in as Poser.

From there I painted around my neighborhood for the next year, getting comfortable with the word and in 2008 I started to travel downtown Ottawa to paint. To put it lightly, there was quite a bit of skepticism from within the community, so I had nearly every piece I painted crossed over until later in 2009 or so, but I wouldn't change a thing and it taught me a lot. 2009 and 2010 were great years. I managed to enjoy some success with the opportunity to paint with some of my early idols, Sberk, Dems, Daser, Net, Red5, and Cab. 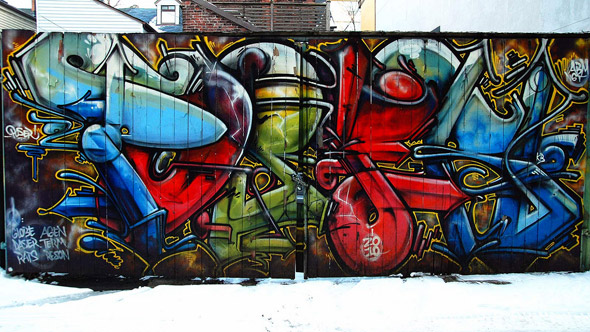 There's one really amazing piece in Graffiti Alley that isn't one of your signature rabbits. Can you tell me a little bit about that?

The Queen Street piece was done back in October 2010 for a graffiti jam that Globe organized. It was my first jam I had ever done in Toronto, and it was a great experience to paint alongside the people that inspired me as I grew up. It was loosely based off of a sketch I did in response to a challenge to try different styles, but I want to revisit it. I think I simplified it too much.

You've certainly been busy around Toronto this year. Sometimes it feels like I bump into a new piece every time I turn a corner in some neighbourhoods.

This year I've had the luck of having the Flickr community's support, on my own page and through a page that a group of photographers created to document my work around town. This is as inspiring as it is exciting... it's great to see the city take notice, especially in the middle of the new anti-graffiti program. To everyone that contributes, thanks for everything. 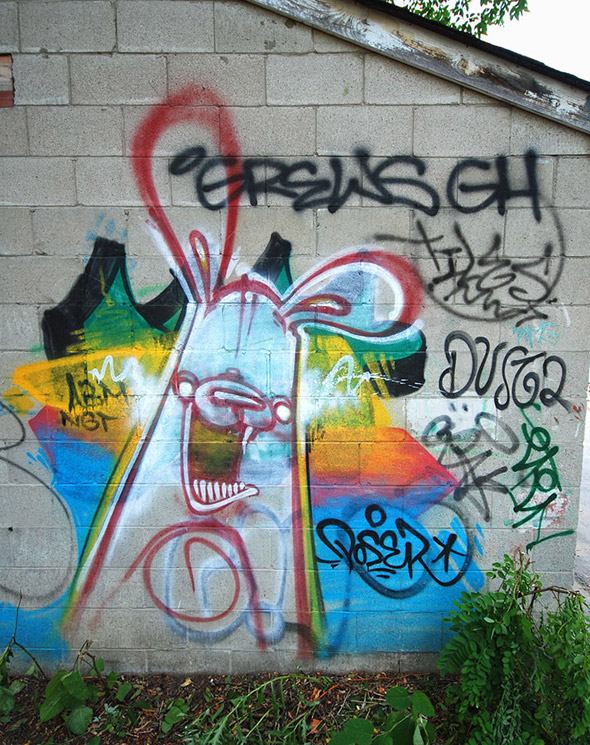 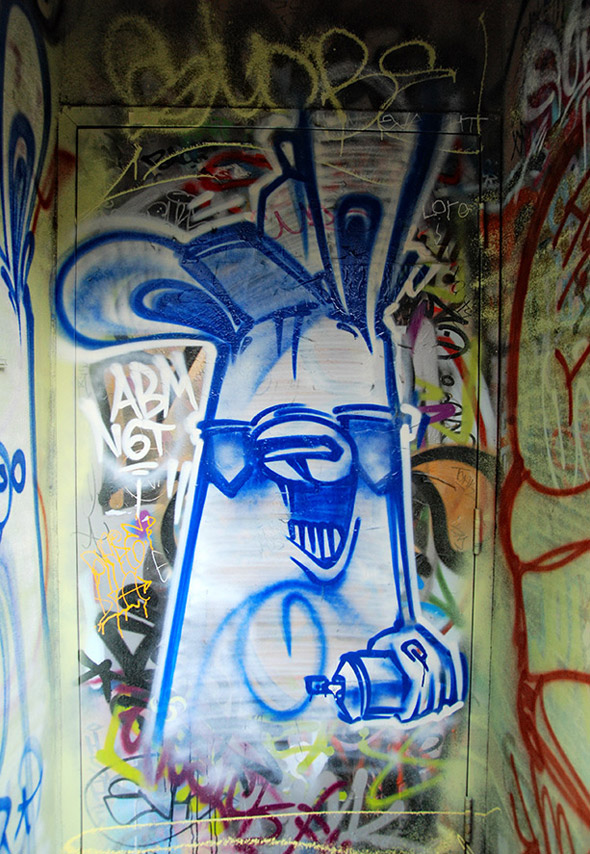 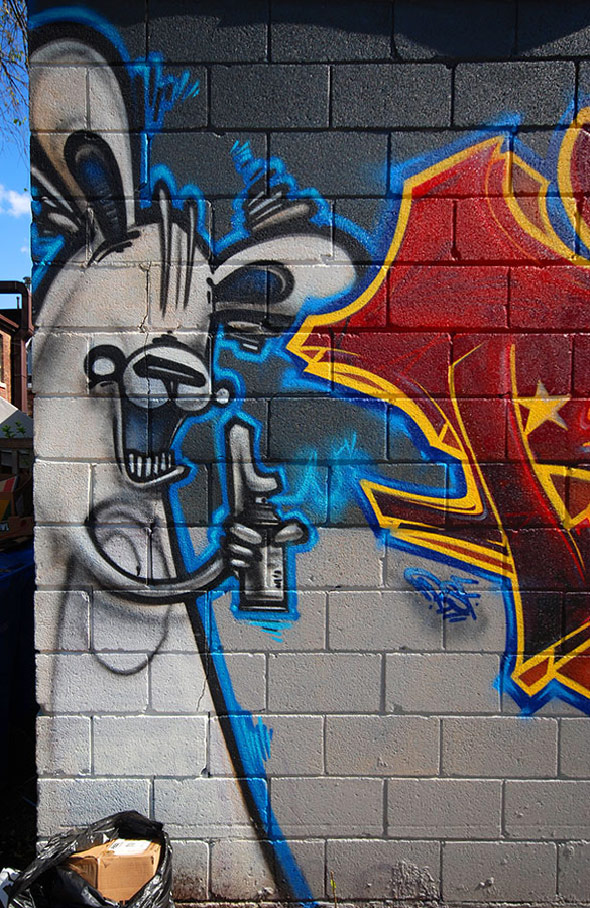 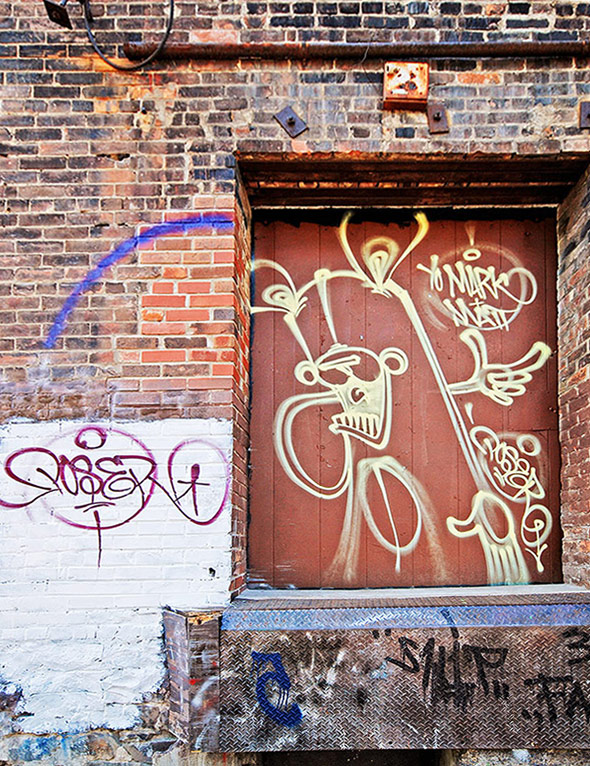 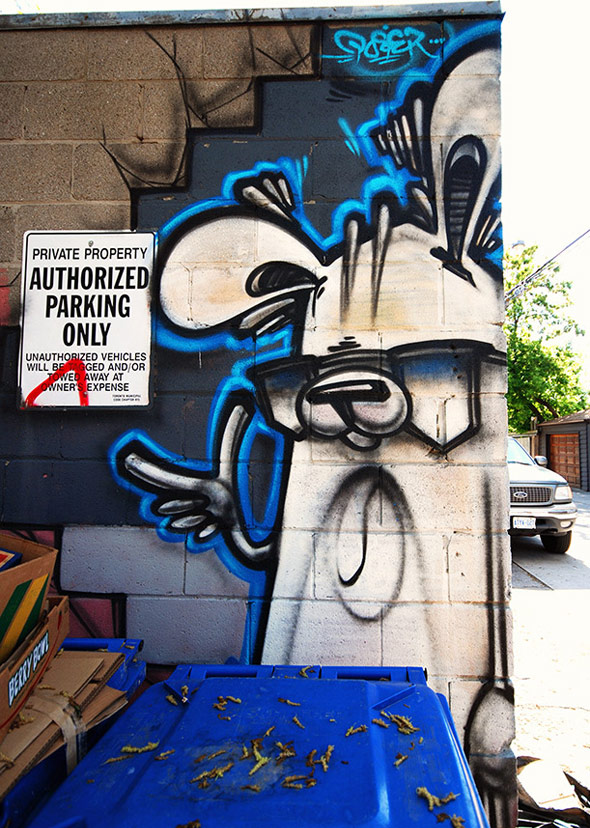 For more of Poser's work, check out the Flickr Group here.

Photos and interview by Scott Snider