As the City of Toronto's new graffiti plan goes before council today, the fate of a recently commissioned mural in Kensington Market remains up in the air (see update below). The work of Adrian Hayles, the piece was put up at the request of 4 Life Natural Foods in an effort to discourage repeated tagging sessions on the building it occupies at 257 Augusta Avenue.

It's a strategy that's endorsed by the City itself. "Murals (graffiti art) are an effective means of deterring graffiti from appearing on structures," reads a note on Toronto's Graffiti Abatement Program webpage. That's why 4 Life owner Potsothy Sallapa sought out a mural in the first place. I kept painting it and painting it," he said of the oft-vandalized second floor of the building. "I got the mural to stop the tagging." 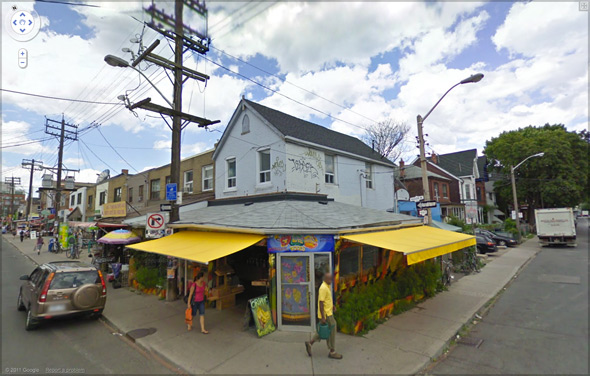 And it appears to have worked. Completed on June 2nd, my casual inspection of of the property yesterday revealed that the taggers have stayed away since the painting of Hayles' mural, which depicts jazz legend Miles Davis. Supported with funds from the Kensington Market Action Committee in addition to those supplied by Sallapa, it would seem this is a textbook case of an effective, community-endorsed mural. 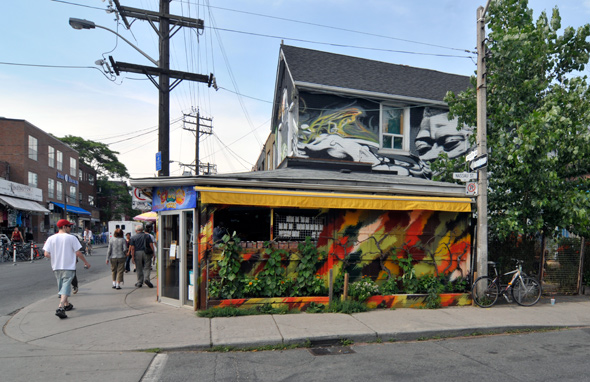 Nevertheless, back on June 13th, a removal notice was sent in regard to the "graffiti" on the south elevation of the building. "I think it must be a mistake," Sallapa told me over the phone earlier today. "Maybe they meant the place next door." Anything's possible, but in the absence of a database of commissioned murals â a long overdue system called for in the new graffiti management plan â it's more likely that the Municipal Licensing and Standards officer cited this as a standard bit of (unsolicited) street-facing graffiti.

With a July 14th re-inspection date looming, Sallapa says the landlord of the building has taken the notice up with the City, but that he's yet to hear back from him on the result of the inquiry. Being on private property, however, the landlord can apply to have the mural exempted subsequent to a review by local community council. Should it go this far, one suspects that the mural will be allowed to stand, but the fact that it was cited in the first place underscores just how flawed the City's current graffiti abatement strategy is.

As it turns out, Sallapa was (mostly) right. Although he was referring to a business across the street when he speculated that the graffiti removal notice was "a mistake," the citation is in fact for a neighbouring property. MLS spokesperson Bruce Hawkins explains that "the property in question is municipally known as 257 Augusta Ave; however there is also a "convenience address" associated with these lands known as 62 Nassau St., i.e. it's all technically 257 Augusta. The notice that was issued has to do with the tags that are on the "garage structure" that uses the convenience address at 62 Nassau. Unfortunately, as a convenience address, 62 Nassau is not recognized in our database."

Although the MLS officer spoke with someone affiliated with the property when the notice was issued, this information apparently never made it to Sallapa, who commissioned the mural in the first place. According to Hawkins, the owner has now ensured "that the graffiti vandalism on the garage door will be painted over." 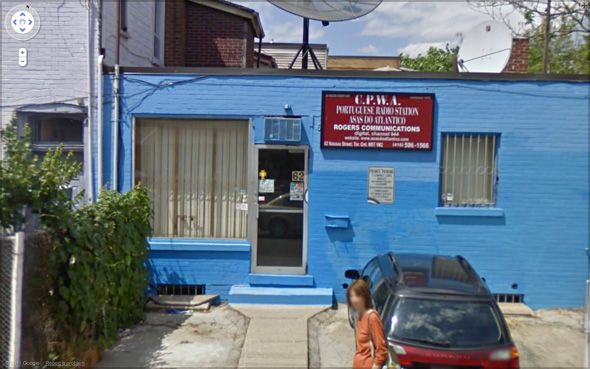 Here is a Google Street View photo of 62 Nassau St., which according the MLS database is part of the property at 257 Augusta. The current graffiti is located on this structure (though not depicted here because it's a dated image).

Hat tip to Corey Mintz, who first tweeted about this situation yesterday.