The evolution of Toronto's graffiti crackdown

Back in March, after the initial news that the City of Toronto was engaged in a full scale crackdown on graffiti had come to light, I took a walk with my camera along West Queen West to see what specifically was being targeted. It was an illuminating experience, the kernel of which was that the vast majority of citations had been written for crappy tags and mediocre throw-ups. Okay, I thought, I'm not going to complain a whole lot if this is the type of stuff that's being ordered for removal.

It would appear, however, that something has changed over the last little while â though the nature of that change might be somewhat surprising. With more and more reports coming our way of less conspicuously located murals being buffed, my first inclination was to assume that the graffiti crackdown had entered a second phase, one which dealt more specifically with alleyways and other large-scale pieces like Joel Richardson's mural on Dupont Street. 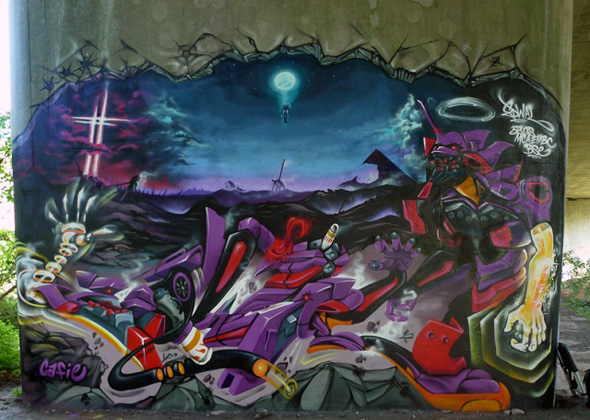 Not so, according to MLS spokesperson Bruce Hawkins. Their focus, he tells me, is still very much on "the street-facing facades of buildings" rather than "non-business corridors (i.e. back alleys, ravines, under bridges, etc.). On the other hand, there's been an increase "in complaints through 311" for these types of areas, which leads officers to investigate and, ultimately, to what you see in the lead photo.

I suppose it shouldn't be surprising. On top of the hordes of media attention paid to the crackdown, there are bus shelter ads scattered across the city asking that residents report instances of graffiti/vandalism. As much as there is outrage in these pages over the loss of murals like Richardson's, the reality is that not everyone likes street art. And now that discussion of it has skyrocketed, the complaints are starting to roll in. That's not good if you like this type of graffiti. Even if MLS isn't proactively targeting murals in back alleys and under bridges, if these complaints continue to grow, you can bet that more murals will be buffed.